Two Brazil-based companies have agreed to pay a record-breaking US$ 3.5 billion in fines to settle charges that they paid hundreds of millions of dollars in bribes as part of the South American country’s massive Petrobras scandal, the United States Department of Justice announced Wednesday. 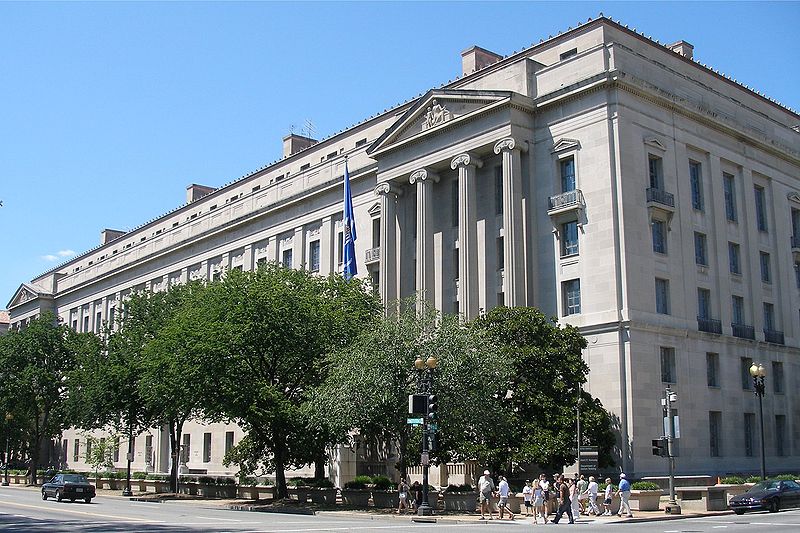 The United States Department of Justice building in Washington, DC (Photo: w:User:Coolcaesar, GNU 1.2) Construction conglomerate Odebrecht agreed to pay $2.6 billion and petrochemical firm Braskem agreed to pay $957 million to resolve charges brought in the United States, Brazil and Switzerland. Most of the money will go to Brazilian authorities.

The scandal at Brazilian state oil company Petrobras centers on allegations that company directors, contractors and politicians from the Workers' Party and it's allies collaborated in order to siphon billions of dollars from the firm. The case has resulted in charges against former Brazilian President Luiz Inacio Lula da Silva and helped trigger the impeachment of his successor, Dilma Rousseff.

Odebrecht, Latin America's largest engineering company, paid around $788 million in bribes to government officials, their associates and politicians in order to attain business around the world, the Justice Department said.

Braskem is the largest regional petrochemical producer in Latin America, and is owned by both Odebrecht and Petrobras.

"Odebrecht and Braskem used a hidden but fully functioning Odebrecht business unit – a 'Department of Bribery,' so to speak – that systematically paid hundreds of millions of dollars to corrupt government officials in countries on three continents," Deputy Assistant Attorney General Sung-Hee Suh said.

These bribes were disguised as payments that went through a network of shell companies, but were sometimes also simply delivered in cash-filled suitcases.

Former Odebrecht's CEO, Marcelo Odebrecht, is currently serving a 19-year sentence prison on corruption charges in Brazil, but Reuters reports he turned state's witness and is expected to be released by the end of 2017.

Spanish authorities said in November they had captured the “financial mastermind” behind the Petrobras scandal. The lawyer for Odebrecht was allegedly responsible for “payment of commissions in the awarding of private and public works in Brazil and abroad.”