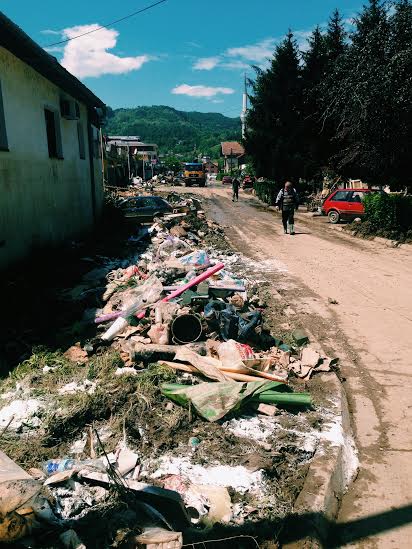 Maglaj, a town of 27,000 in northern Bosnia and Herzegovina, has been one of the hardest hit in the recent floods that have devastated Bosnia and Serbia.

Last week’s torrential rains were the heaviest in the region’s recorded history, with three months’ worth of rain falling in three days. According to NPR, the floods triggered more than 3,000 landslides across the Balkans, in some cases displacing land mines left over from the 1992-‘95 war.

More than 40 have died because of the natural disaster, and 500,000 have been evacuated or left their homes.

If circumstances weren’t difficult enough, flood victims worry that unscrupulous people are taking advantage of the natural disaster to fatten their own pockets.

“If someone wants to help, they should give directly—by hand,” said Aida, a university student in Sarajevo who returned to her devastated hometown of Maglaj to help with the relief effort. She believes “half of the people aren’t getting the donations.”

That has been the case for Nerminka Alić. “I have nothing,” said Alić, a Maglaj resident squatting in an empty room of an apartment building with her 18-year-old son, who is autistic. The flood forced her family to move to the building’s third floor after their first floor room was submerged.

In the best of times Alić struggles to survive on a monthly allowance of 380 Bosnian convertible marks (US$ 265).

She says the flood has put her in a crisis situation, and that the aid organizations on the ground are “humanitarian” in name only. Although Alić lives only a few blocks from the Red Cross, she says she has received neither clothes nor food. She has not had electricity for a week. 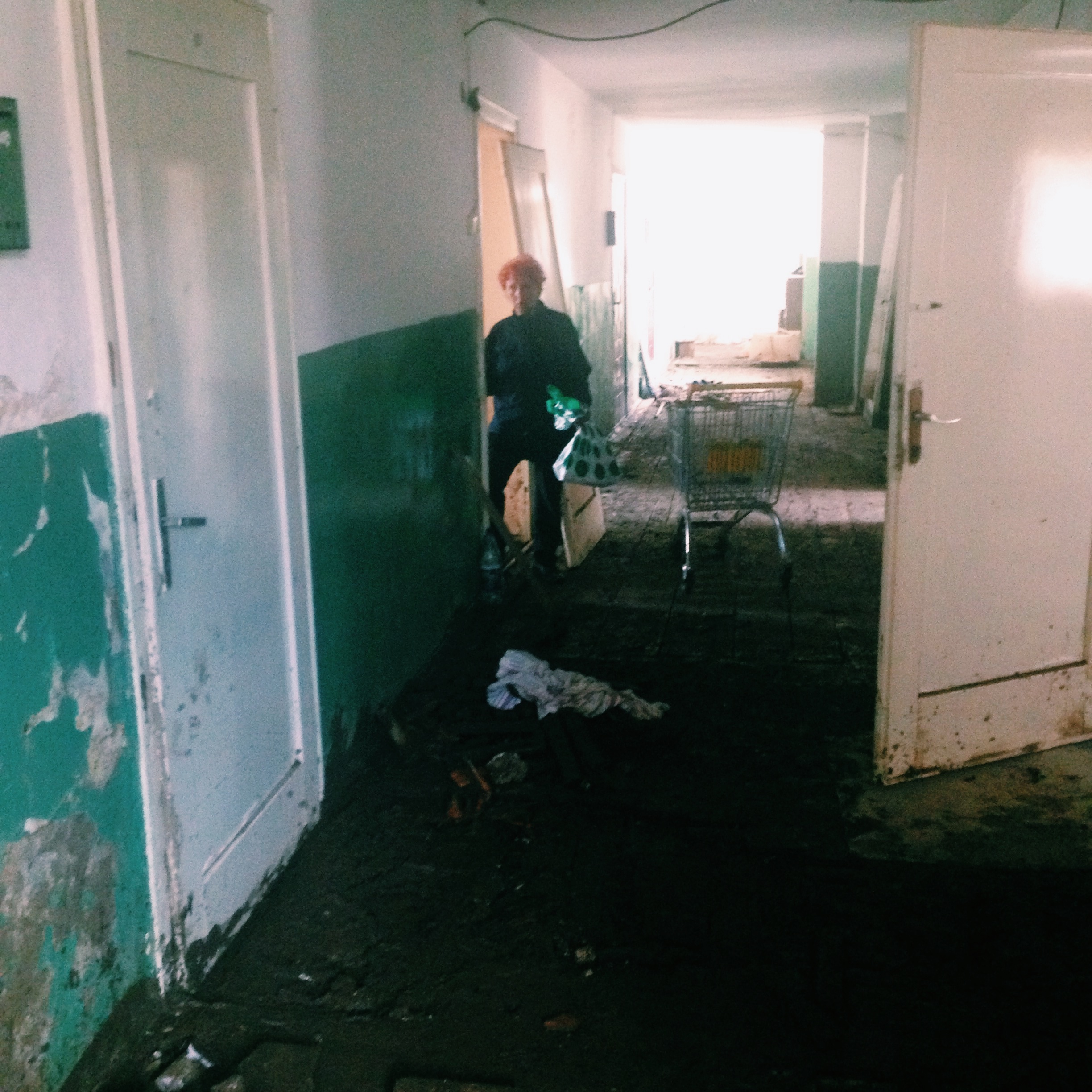 One of Alic's neighbors, in a flooded apartment

Under such conditions, tempers have flared. In one incident, some men tried to obtain bread from a food truck sent to the Muslim charity Merhamet. The organization’s regional head called the police on the men, one of whom was then beaten by the police.

“Here the cops beat you up first, and then ask you questions,” said Alić’s neighbor, who did not want to be identified by name.

Police commissioner Alen Musić had no comment on the alleged police beating. He said the priority for the citizens from the town—some of whom had to be evacuated by helicopter— was reconstruction.

Residents in Maglaj have voiced concern over opportunism. Some also expressed worry over providing their full names, asking for only their first names to be published.

A 43-year-old woman named Amela said she was grateful for the donations. However, she said she was equally dismayed that some were being sold. “People are walking in slippers because they’re not getting the donated boots,” she said. Amela suggested that humanitarian donations should be marked with an “H” so they cannot be sold on the market.

Presently, those who need food or household products can go to Red Cross or Merhamet distribution centers. The Red Cross asks that citizens only present their ID cards. The lines are not long in the town center and railroad station hubs, and trucks bearing goods and volunteers come in regularly. 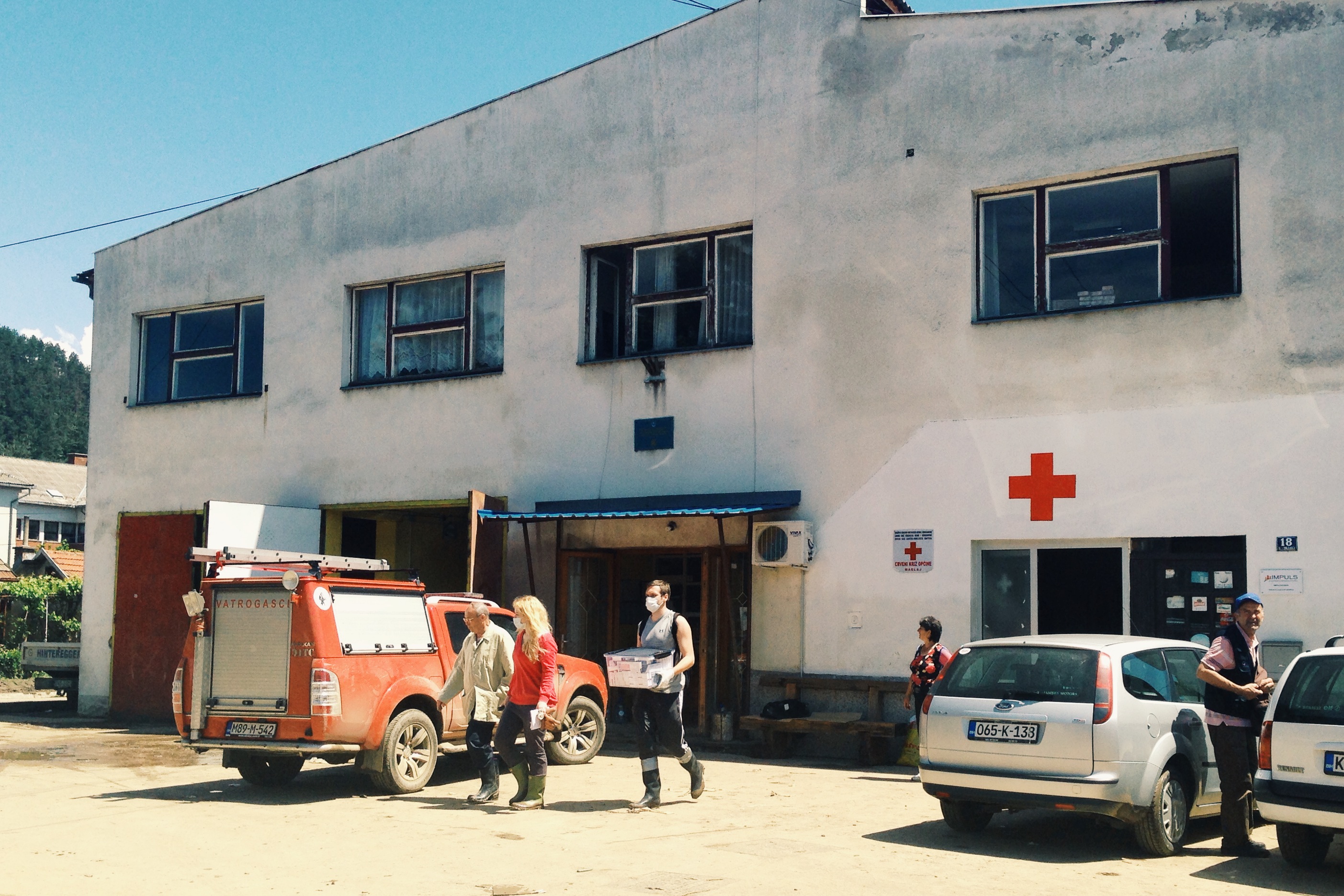 However, some residents say they don’t have the time to get to them.

Armed with shovels and heavy-duty boots, many are still hauling the sludge from their homes onto the street curbs. They wear blue surgical masks to keep the dust clouds out of their lungs, but nothing shields them from the stagnant mud stench.

Mato, a middle-aged man from the town, pointed to the streets lined with muddy piles of wood scraps, plastic bottles, clothing, and chopped up furniture. “We have to clean this first. How are supposed to go to the Red Cross and pick up donations? Those who are suffering most are getting the least.”

He added that the allocation of aid is uneven and disorganized, with no lists saying who gets what. “It’s important that food, medicine, and boots are distributed fairly and into the right hands,” he stressed, adding that he is worried some people will unfairly profit from the crisis.

Mevlida, a local bakery worker, said that trucks have been coming in with supplies for three days, but she has not received anything.

She said she needs disinfectant, but cannot afford the small bottles, which cost 8 Bosnian convertible marks (US$ 5.50) per bottle.

“It’s a catastrophe,” she laments.