OCCRP At The Heart of the Global Debate on Corruption

In forums from London to New York to the San Francisco Bay, the Organized Crime and Corruption Reporting Project (OCCRP) is playing a significant role in the global discussion regarding international crime and corruption. Senior representatives from the organization have shared their insights on the sophisticated criminal structures behind illicit financial flows recently as world leaders discussed possible measures to combat corruption. 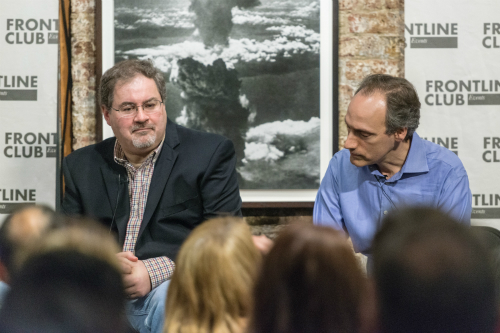 Radu spoke during the summit in a session chaired by Colombian President Juan Manuel Santos. His comments addressed the idea that greater corporate transparency would remove the perceived need for intrusive surveillance of individual citizens by their governments.

“More transparency in the way business is done globally will also mean less infringement on people's rights to privacy,” Radu said. “Currently, law enforcement agencies argue that mass surveillance is used to track down business by organized crime and terrorist organizations. There would not be such a need if the criminals weren’t able to finance their operations in the shadows.”

The summit was preceded by the release of the Panama Papers project in April, of which the OCCRP was part, spotlighting the role offshore tax havens play in hiding criminal cash.

"We are in the midst of the greatest transfer of wealth from poor countries to rich since the Spanish conquistadors sacked the Americas,” OCCRP editor Drew Sullivan said, “It creates drastically unstable countries in the developing world by robbing them of investment capital while creating asset bubbles in Europe and America. Corruption is undermining the world economy.”

Coordinated by Oxfam, some of the world’s leading economists signed an open letter to world leaders ahead of the summit asserting that tax havens “serve no useful purpose,” citing the Panama Papers revelations and other exposés. “We can be glad to see that the journalists are doing their job. The problem is that the governments are not doing theirs,” leading economist Thomas Piketty, one of the letter’s signatories, said on his blog.

Six countries, Britain, Afghanistan, Kenya, France, the Netherlands and Nigeria, agreed to publish registers of corporate beneficial owners in their territories as a result of the summit, the Guardian reported. Six more countries, including Australia, will consider doing so.

Radu, OCCRP's executive director and co-founder, was asked to contribute to a collection of essays published by UK Prime Minister David Cameron. His chapter on "Following the Money" and the importance of investigative journalism was warmly received by the international community.

Radu’s chapter was titled “Follow the money: how open data and investigative journalism can beat corruption.”

"It takes a network to fight a network and journalists all over the world are ready to cooperate and take on the powerful and the corrupt,” Radu said. “Journalists, hackers and activists are a powerful global force that will shrink the criminal playing grounds.”

Senior OCCRP representatives were invited to speak at panels to stimulate further discussion around the summit. On Tuesday, May 10, a Parliamentary 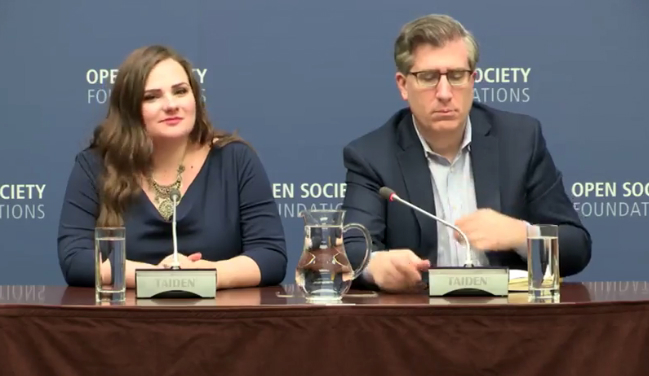 Miranda Patrucic at the Open Society Foundations, New York.dinner hosted by Lord Ashdown, the former High Representative for Bosnia and Herzegovina, brought together people from the world of business, technology, media and human rights activism in London. A major theme during the discussion was the case of Khadija Ismayilova, the Azerbaijani journalist jailed for exposing endemic corruption by the country's First Family and its allies.

On Wednesday, May 11, OCCRP editor Drew Sullivan spoke in a wide-ranging panel discussion at the Frontline Club. Other panelists included investigative journalists from the Guardian, Global Witness and the BBC, among others. The audience was involved in a highly interactive conversation that ranged across the Panama Papers, the Trafigura scandal, mining abuses in the Democratic Republic of Congo and Azerbaijan, and much more.

On Friday, May 13, chief technologist Smari McCarthy addressed more than 120 people at the Institute for the Future on his work with OCCRP and his involvement with the Pirate Party. McCarthy’s talk, in which he outlined the corrosive effect of hidden and stolen wealth on the world’s economy and technology’s leading role in defeating it, was followed by almost two hours of questions and comments. He noted during his talk that OCCRP has a far greater social impact per dollar than any member of the “Five Eyes” intelligence alliance.

On Tuesday, May 17, OCCRP regional editor and investigative reporter Miranda Patrucic had a critical discussion with Leonard Benardo, Open Society Foundations’ regional director for Eurasia, on the Panama Papers and the future of investigative journalism at the Open Society Foundation headquarters in New York. She stressed the importance of collaborative cross-border journalism in producing high-quality investigative stories that further the public interest. Patrucic is one of the newly minted winners of the 2016 Knight International Journalism Award, along with Mexico’s Carmen Aristegui.