Editor’s note:
The following article was written by journalists of the YanukvychLeaks project, an OCCRP partner. It reflects the opinions of those who worked closely with the struggle to recover valuable documents proving fraud and other crimes at the billion-dollar Mezhyhirya complex. OCCRP is posting it at the request of our partners. 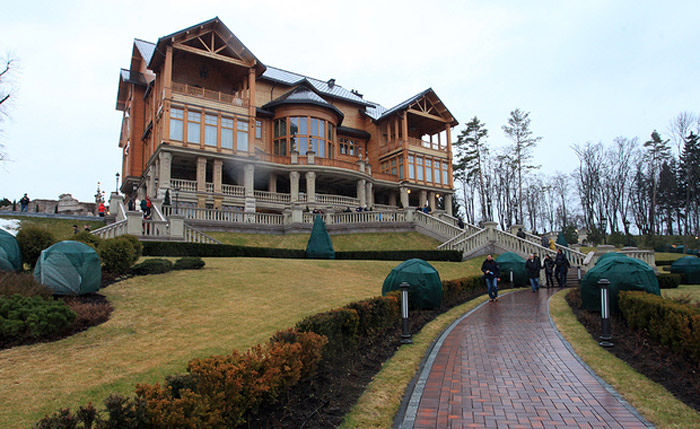 Investigative journalists are objecting to President Petro Poroshenko's transfer of the billion-dollar Mezhyhirya complex used by ex-President Viktor Yanukovych to the Defense Ministry.

We consider President Petro Poroshenko's initiative to transfer the former residence to the domain of the Defense Ministry to be a dangerous mistake.

It has no legal grounds, but at the same time it's indicative of how decisions are currently taken in Ukraine.

The president came out with this initiative on Oct. 13.

While we fully share his concern with the state of medical aid and rehabilitation of the Ukrainian soldiers who have been fighting in the war, attempts to solve the problem in the way he suggested are not acceptable, in our opinion.

We don't think that the president should single-handedly take decisions abou the future fate of Mezhyhirya for the following reasons: Such a decision would come in violation of procedures and laws, since Mezhyhirya residence is under arrest and is part of crucial body of evidence in a criminal case against former President Viktor Yanukovych.

So, any decisions on further changes of ownership can only be taken by court.

According to the documents found on the territory of the residence on Feb. 21, 2014 and published by yanukovychleaks.org, the residence was built using income acquired though corrupt means, and which was essentially stolen from the citizens of Ukraine.

This is why Mezhyhirya residence should become a national park, an open monument to corruption that would remind present-day and future officials about the fate that awaits the thiefs who hide behind a tall fence.

The decision to transfer the former residence to the Defense Ministry would close Mezhyhirya for public and, instead, lead to its financing at taxpayer's cost.

There has been no estimate of potential cost of this initiative, nor the cost of transformation of the property into a rehabilitation center. Such a decision contains high risks of corruption and is equal to the return of abuses we had seen during the Yanukovych era.

As of Feb. 21, 2014, when the residence was open to the public, it has not received a single kopeck from the state budget of Ukraine and has been sustained though entrance fees, guided tours and events organized on the territory of Mezhyhirya, such as the international festival for investigative journalists MezhyhiryaFest.

Moreover, Mezhyhirya can set a precedent for creation of national trusts for running parks and recreation zones.

This type of legal entity does not exist in Ukraine, but is popular in the world, and is used to ensure that socially important infrastructure is maintained by trusts that have supervisory boards of activists, local communities and government, and which are able to raise money and conduct business activity to sustain the important properties and ensure their development.

We negotiated with an international law firm that volunteered to write a bill on trusts for Ukraine on pro bono basis.We appeal to all players in Ukraine who have rights of legislative initiative to address challenges of Mezhyhirya in a way that can set a precedent for the return to the public of a property that was obtained though corrupt means.

At the same time, we stand ready to give practical assistance in creation of the legal base and concept for further functioning of Mezhyhirya. We believe that its future fate should be decided by the public.

More about yanukovychleaks.org can be found here.