Tens of thousands of documents belonging to ousted Ukrainian president Viktor Yanukovych have been fished out of the lake on his sprawling estate in Mezhygirya Park outside of Kiev.

OCCRP partners and other journalists have begun uploading them to the website “Yanukovych Leaks,” which now displays a wealth of information about the former president, including receipts detailing his extravagant spending, financial investments, and lists of press enemies. 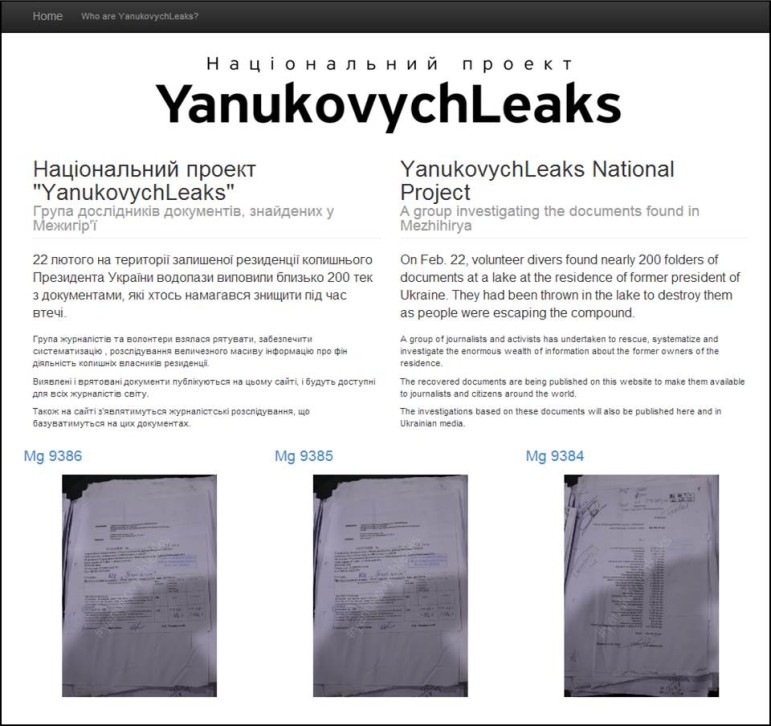 Euromaidan activists and journalists raced to Yanukovych’s once off-limits estate after he fled from Kiev, where they discovered piles of burned documents, and another trove that had apparently been hastily dumped into the lake.

Reporters Vlad Lavrov of the Kiev Post and the Organized Crime and Corruption Reporting Project (OCCRP), Dmytro Gnap from Slidstvo/TV Hromadske, and Oksana Kovalenko from Ukrainska Pravda were the first journalists on the scene.

With the help of more than 50 other people, including Oleg Khomenok, an investigative trainer with Internews and Scoop, the journalists spent the weekend sorting, separating, and drying the soggy and clumped documents.

As protestors and government officials struggled to create a new government in Ukraine, armed protestors secured the luxurious guest compound where Russian President Vladimir Putin was once an honored guest.

OCCRP partner Lavrov said, “Now we are occupying the site of Yanukovych’s corruption and investigating his wrong-doing…That’s amazing.”

Twenty journalists from a dozen media outlets have set their normal competition aside, working together to ensure that the sensitive material is not destroyed, stolen, or seized, but rather made available to the public.

Almost 700 of the estimated 20,000 to 50,000 documents recovered have already been posted online. New documents are being added every hour.

Drew Sullivan, editor of the OCCRP said, "The Ukrainian reporters who led this effort have done Ukraine and journalism a great service.  We're proud to have played a small role."