Dozens of journalists and medical workers covering the street fights and protests in Kiev were injured by rubber bullets and stun grenades fired by police during January.

To show support for their colleagues, the Danish Association for Investigative Journalism (FUJ) and the Network for Reporting on Eastern Europe (n-ost) in Germany are collecting donations for investigative journalists in Ukraine.

“The situation of our colleagues at Kyiv Post and hromadske.tv is onerous,” said Henrik Kaufholz, a journalist speaking on behalf of FUJ. “The government is harassing them, they are short on funding and physically and mentally exhausted from working day and night. They need all the support they can possibly get.”

According to Kaufholz, the money will go to reporters working for the Ukrainian weekly Kyiv Post and the independent TV channel, hromadske.tv, which started broadcasting in November 2013. 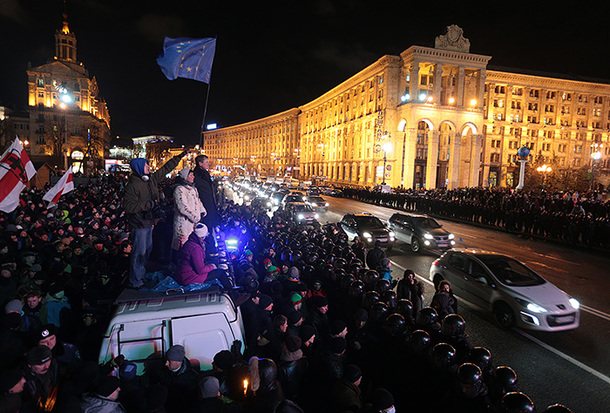 Both sites have received funding from OCCRP partner SCOOP, an investigative journalism network founded in 2003 and managed by FUJ.

Street clashes began in Ukraine on Jan. 19 after parliament passed “anti-protest” legislation forbidding people from wearing masks or helmets to rallies and requiring prior government authorization for installation of tents, stages, and sound equipment in public places. The action prompted an outcry from citizens.

Oleg Khomenok, a journalist and the national coordinator for SCOOP in Ukraine, said that according to witnesses, police deliberately targeted journalists during the protests.

“Given the situation in Ukraine, I vacillate between frustration and rebellion,” he said. “How is it possible that shots are fired against my colleagues in the streets of Kiev in the middle of Europe - simply because they are journalists? They are beaten because they perform their work, they are locked away, because they live among the protesters and report on the action.”

Drew Sullivan, editor of OCCRP, likewise condemned media suppression in Ukraine. He said, “We applaud SCOOP for its action. We must all stand by the journalists who risked their personal safety to tell the truth in hard times. OCCRP, too, will do whatever we can to help with their efforts.”