The ICFJ honored Anin for his work in probing cases of crime and cronyism in Russia, the repercussions of which have led to further investigations by other countries and the European Union. In particular, Anin was recognized for uncovering how almost US$1 billion disappeared from the Russian treasury and ended up in offshore accounts and shell companies linked to Russian officials and their associates.

In his acceptance speech, Anin said that the Knight International Journalism Award also belonged to Sergei Magnitsky, Magnitsky’s friends, and the OCCRP. Anin worked with the OCCRP to uncover what he said was “one of the most insolent crimes committed in Russia in decades,” the jailing and death of Sergei Magnitsky. Magnitsky was a Russian lawyer who was falsely accused of perpetrating the US$230 million tax fraud he actually fought to uncover.

Anin also paid tribute to four fellow journalists who were murdered in the past 10 years for their investigative work for the Russian newspaper, the Novaya Gazeta. In particular, he highlighted the efforts of his assassinated colleague, Anna Politkovskaya.

Anin, originally a sports reporter for Novaya Gazeta, said he decided to become an investigative reporter after hearing that Politkovskaya had been killed because of her work. Anin said he was inspired by her fight to uncover the truth, and praised Politkovskaya as well as Magnitsky for their bravery. He said, “By sacrificing their life, they changed millions of lives. They changed my life.” 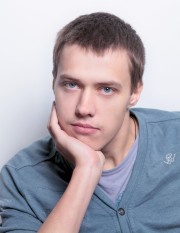 The ICFJ also honored two other journalists at the annual awards dinner. Umar Cheema, founder of the Center for Investigative Reporting in Pakistan, received the Knight International Journalism Award for his reports on government corruption and car smuggling. The ICFJ honored Cheema for his tenacity as a reporter who, despite being kidnapped and tortured, has continued his investigative work. Richard Engel, chief foreign correspondent for NBC News, received the Excellence in International Reporting Award for his coverage of political transition and war in the Arab world.

In a video address, Kerry commended the journalists for their roles in furthering freedom of expression and democracy around the world and said, “Today we recognize and honor your work. We stand in solidarity with journalists the world over. Those who have lose their lives and sacrificed their freedom to promote the freedom of others, and those who continue in that struggle." He praised the award recipients for being “truth tellers in a noble cause.”

Kerry’s words echoed the sentiments of Anin, who at the end of his acceptance speech said, “The truth wants to be known. If we remain true to this motto, honest journalism will never die, despite the death of its best representatives.”