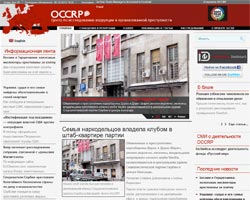 The Organized Crime and Corruption Reporting Project announced Wednesday the launch of a Russian news website covering crime and corruption in the region. The site's content mirrors that of the Project's main site, at OCCRP.org, but is written and translated by native Russian speakers.

Published in the world's fourth most popular language, the Russian website will expand OCCRP's audience by close to 300 million new potential readers.

OCCRP covers organized crime and corruption all over the world with a focus on the countries from Europe to Central Asia. In this region, said OCCRP Executive Director Paul Radu, the Russian language is too important for any good news organization to ignore.

"Russian-speakers live not only in the huge country of Russia, but also in all of the former Soviet countries" Radu said Thursday. "It is a huge community that is, unfortunately, already intimate with the issues that stem from organized crime and corruption."

And because those same countries often lack a strong media presence, publishing in Russian is an important way for OCCRP to spread awareness and expose wrongdoing.

"As an independent news site operating outside of Russia, OCCRP can print stories that avoid the state-controlled, increasingly polarized news coverage in Russia and the neighboring countries," said OCCRP editor Drew Sullivan. "We want everyone to have access to the truth."