Lord of the Land: Leader of Lithuania’s Ruling Party Exposed

The chairman of Lithuania’s ruling party once promised to end backroom deals and graft. But investigations into his agricultural businesses reveal he may have plenty to hide himself. 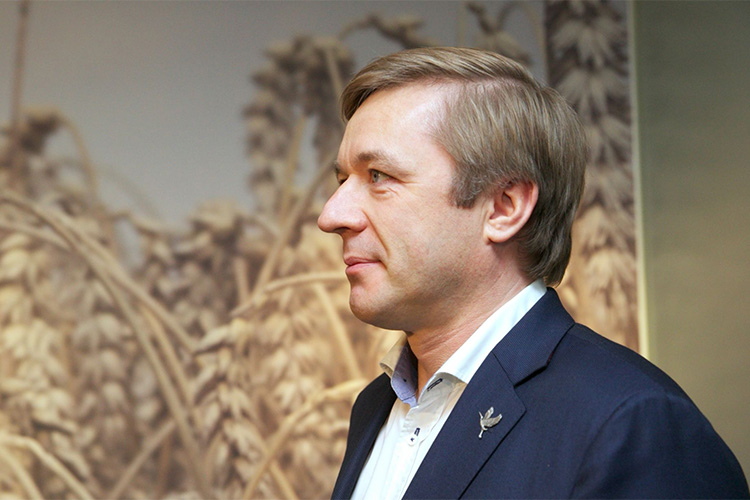 In 2016, the Farmers and Greens Union won a landslide victory in Lithuania’s parliamentary election. Party chairman Ramunas Karbauskis had made many promises: transparent politics, no more corruption, a crackdown on tax avoidance. But now he’s in trouble over those very issues.

An investigation by 15min, a partner of the Organized Crime and Corruption Project (OCCRP), shows that Karbauskis, whose agricultural businesses are worth millions of euros, bypassed legal restraints on how much land he can own. Lithuanian authorities also conducted an investigation into whether his business dodged taxes on a luxurious countryside property. Furthermore, reporters have found companies owned by his relatives that helped him bypass caps on European Union agricultural subsidies.

As these revelations have emerged, Karbauskis’ allies have taken unprecedented steps to obstruct a parliamentary investigation into his business affairs.

From Zero to Hero

Until relatively recently, the Farmers and Greens Union had not been a major player in national politics. After the 2012 elections, it held just one seat in the Seimas, Lithuania’s 141-member parliament. That changed when Saulius Skvernelis — a popular former interior minister — ran as a parliamentary candidate for the party in 2016, lifting it from its marginal role to one of national prominence.

Then, another stroke of luck. As the party was ascending, a corruption scandal shook the rival Liberal Alliance, which had been widely expected to form the next government. Karbauskis’ party stepped in, portraying itself as a more honest alternative.

The message resonated. The party — nicknamed the “Peasants” in Lithuanian — won 56 parliamentary seats in one of the biggest electoral victories the country has ever seen. A coalition government was set up with the Social Democratic Party and Skvernelis became prime minister.

As the party’s chairman, its leader, Karbauskis, holds no major government posts: He is a rank and file member of parliament and does not even sit in the cabinet. His only official position is chairman of the parliamentary committee on culture. Nevertheless, analysts suspect that he pulls the government’s strings, comparing him to Jaroslaw Kaczynski, chairman of the ruling Law and Justice Party (PiS) in neighboring Poland, who is doing much the same.

Tomas Janeliunas, a political scientist at Vilnius University, described Kaczynski and Karbauskis as leading their respective countries “from the back seat.” “[Karbauskis] wasn’t willing to become prime minister or the speaker of the parliament,” Janeliunas explains. “This style of rule raises questions as to why the party’s leader isn’t willing to lead the country.”

The political scientist believes Karbauskis wants to avoid the formalities of a prominent government position such as prime minister. Karbauskis may also want to avoid public attention, a goal Janeliunas believes he has failed to achieve.

“If Karbauskis had occupied an official, leading role in government, he’d have had to vacate it by now, as a result of mounting scrutiny from the media and society at large,” Janeliunas said. 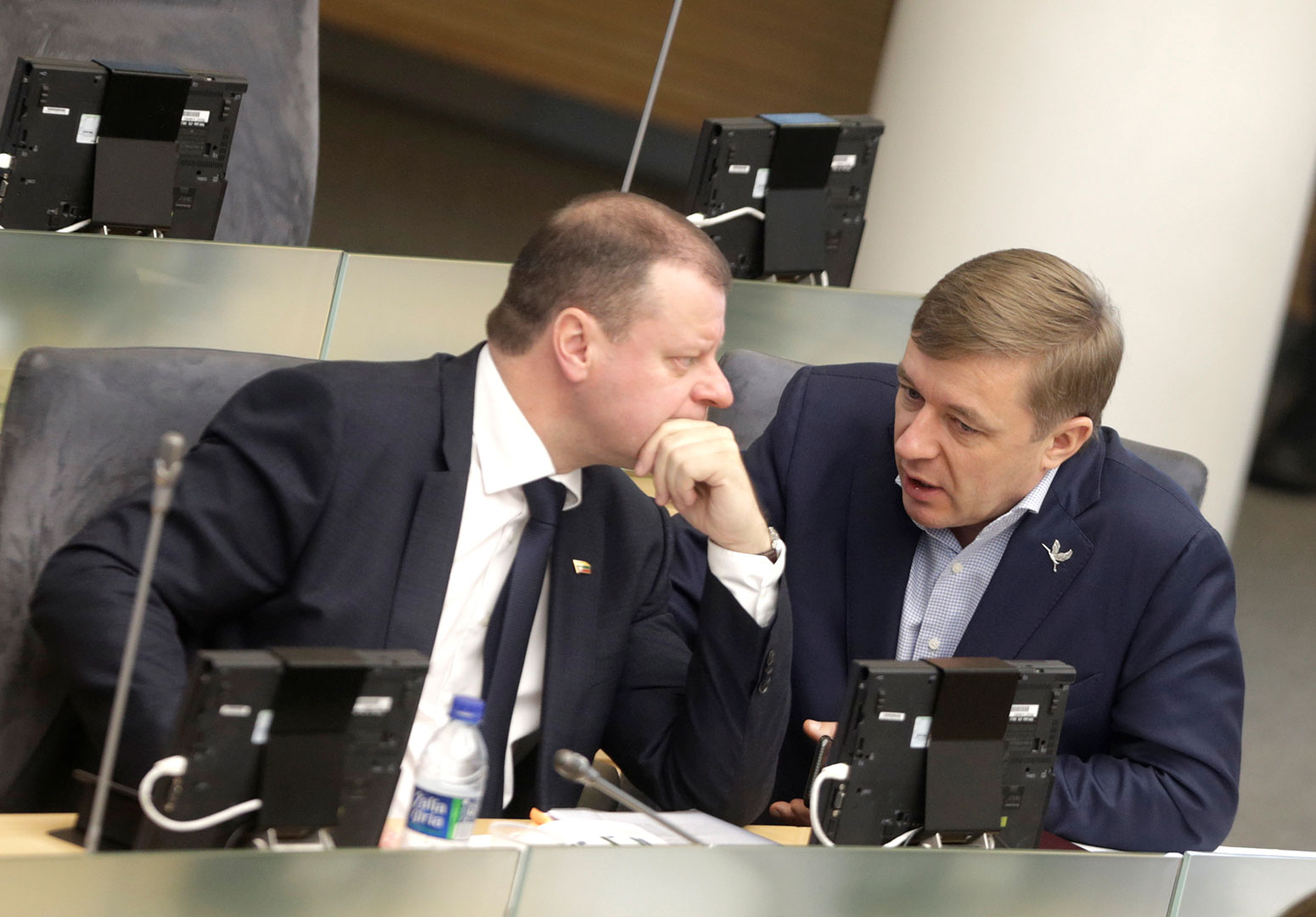 Saulius Skvernelis listens to Ramunas Karbauskis before his swearing in as prime minister in the Seimas, the Lithuanian parliament, December 2016. Credit: Ints Kalnins / Reuters

In addition to his political career, Karbauskis is a major player in Lithuanian agriculture. His farming business, Agrokoncernas, is one of the largest landowners in the Baltic country, although since 2006, restrictions on land ownership have held it back.

Under a law passed that year and intended to promote competition and prevent monopolies, a single farmer or business (including affiliated people and companies) can’t own more than 500 hectares of agricultural land. Agrokoncernas and its subsidiaries own 22,000 hectares, all purchased before the legislation was put in place. The limit prevents Agrokoncernas from expanding — except that the company appears to have found a way around it.

A 15min investigation revealed how numerous companies that appear unaffiliated in any way with Agrokoncernas, but are actually owned by members of Karbauskis’ family, have accumulated agricultural land and leased it to Agrokoncernas or its subsidiaries.

Furthermore, these companies took over land from farmers struggling to repay debts to Agrokoncernas. The law prevented Karbauskis’ business from taking over the debtors’ land directly — but did nothing to stop companies owned by his relatives from doing so.

His father owns one of the companies in this scheme, as does his brother (who works at the Mayakovsky State Theater in Moscow), his sister, and his 20- and 23-year-old sons, who have lived in Spain. One is still there as a student; the other recently returned. Their foreign residency and lack of experience in agriculture has not stopped them from becoming large landowners in Lithuania.

Exactly how much land the family members control is hard to pin down, but data from the country’s land registry shows it’s in the thousands of hectares.

Agrokoncernas won’t say how much land it is leasing from companies controlled by Karbauskis’ family. Karbauskis denies any wrongdoing, telling 15min reporters there had been “no attempt to bypass the law.” Nevertheless, the prosecutor general’s office launched an official investigation on the heels of the 15min investigation. 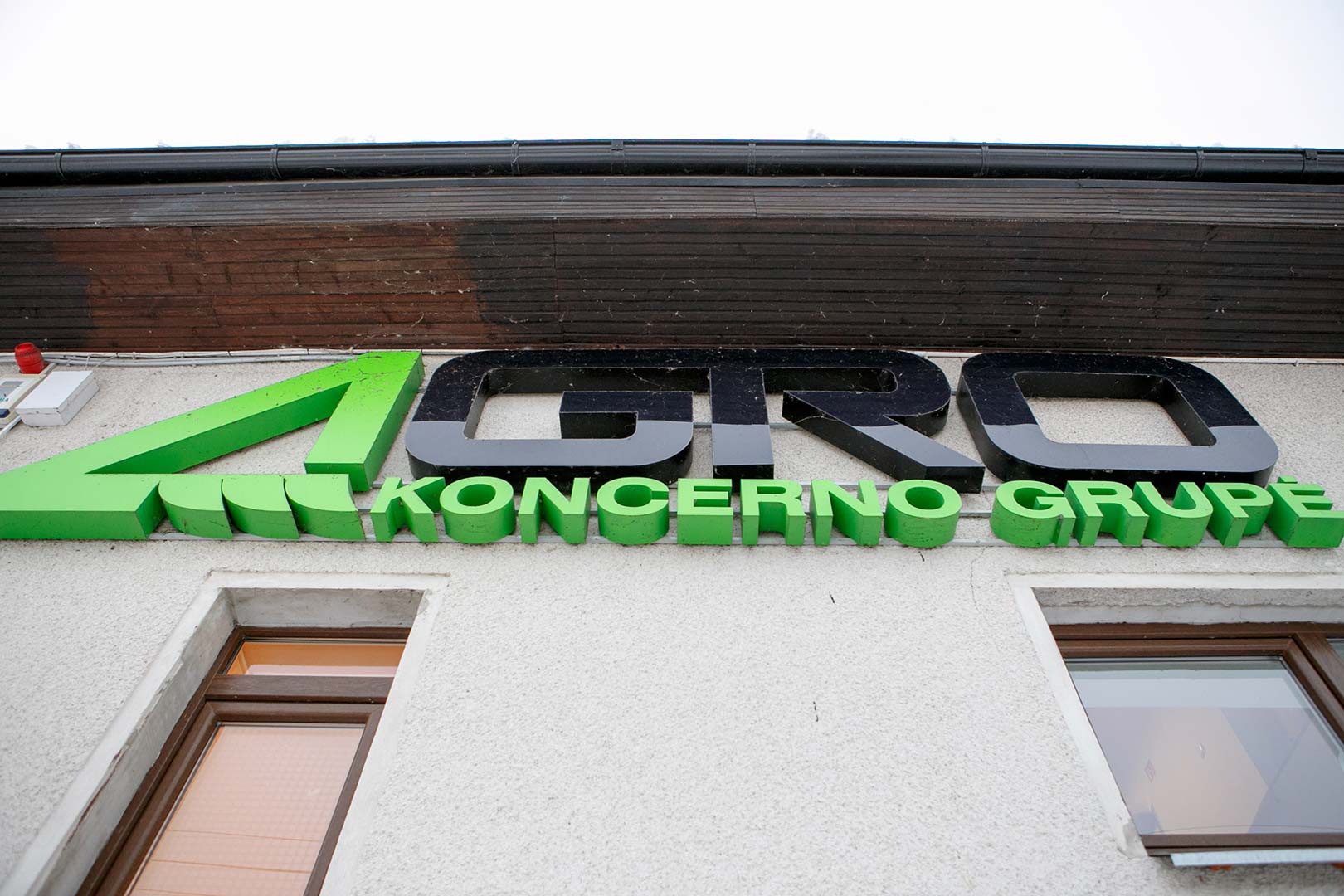 Farm Subsidies for a Psychologist

A separate but similar scheme allowed Agrokoncernas to collect EU agricultural subsidies well over the threshold allowed for individual companies.

According to Lithuanian law, between 2014 and 2020, agricultural companies can receive no more than €1 million in EU support. Agrokoncernas subsidiaries received almost €800,000 in 2015 and 2016, nearly reaching the limit in just two years.

That’s when a company linked to Karbauskis’ sister appeared on the scene. Zeimelio Zemes Ukio Bendrove, owned by Jurga Karbauskyte, a practising psychologist, received €391,000 of EU support in 2016.

If the company was indeed “affiliated,” then Agrokoncernas would have received almost €200,000 more from the EU than allowed.

In a written statement, Agrokoncernas acknowledged to reporters that it has a service contract with Zeimelio Zemes Ukio Bendrove, but Karbauskis denied using relatives as proxies to bypass EU rules, adding that his sister runs an independent farming business.

In an email to reporters, Karbauskis stressed that his relatives were free to develop their businesses however they saw fit. 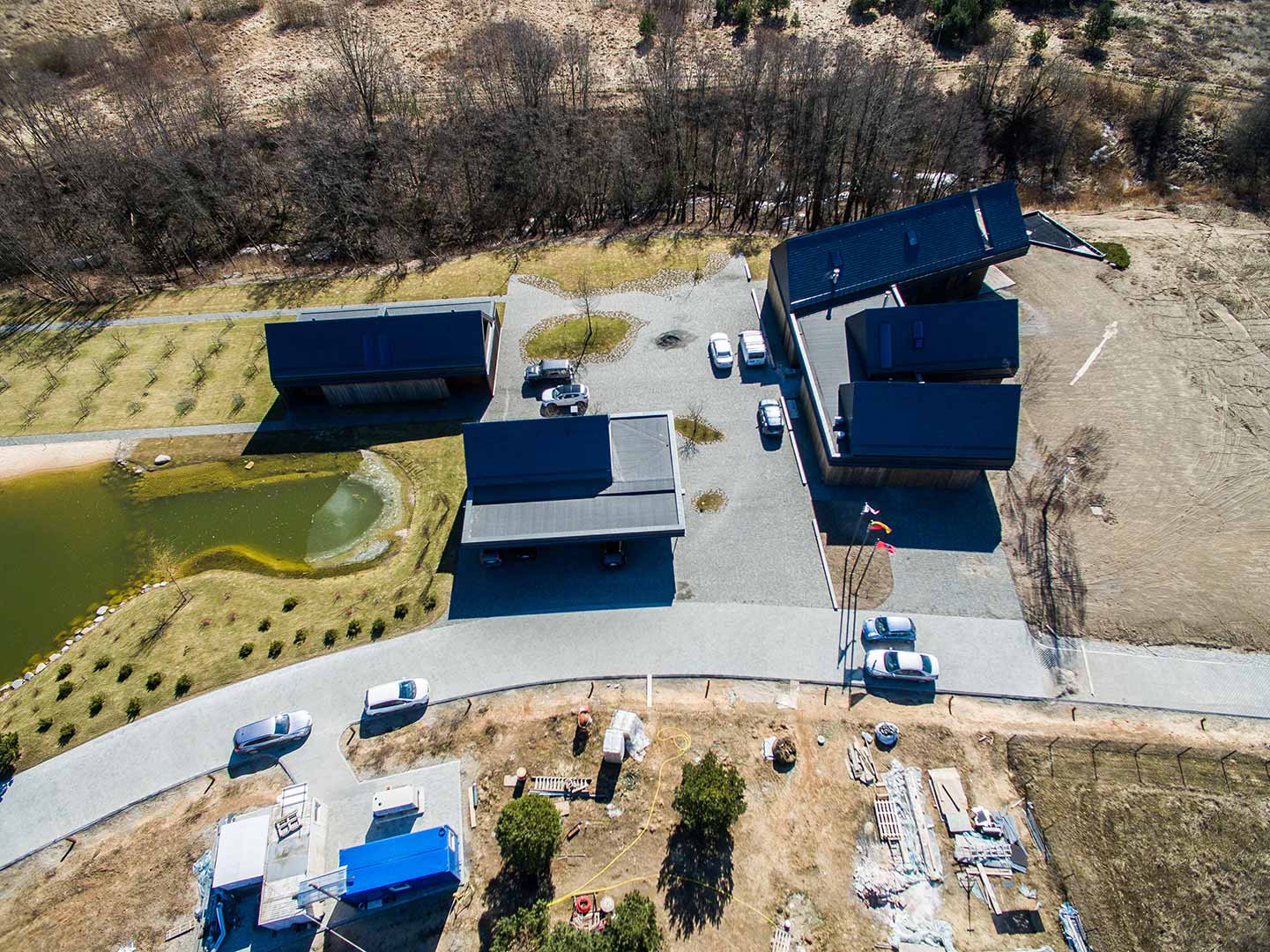 A Palace fit for a Peasant

While Karbauskis’ businesses are primarily involved in agriculture, some profits go beyond farming.

On the shores of the Kaunas Reservoir, Lithuania’s largest artificial lake, a huge estate that local media have dubbed the “Karabauskis residence” is under construction.

Karbauskis has been elusive about whether this really is his future home, but he has never openly denied the possibility (even referring to the premises as “my yard” in an interview). In addition to residential and auxiliary buildings such as garages and sheds, he noted that a “mobile asteroid observatory” is also planned for the site.

According to Karbauskis’ official asset declarations from 2015 and 2016, he didn’t have enough money to build the estate himself. They showed that he had only about €177,000 in his bank account and as hard currency. The rest of his assets were tied up in company shares, real estate, and land.

In fact, according to another 15min investigation, the “Karbauskis residence” is being built not with his personal funds, but with money from Agrokoncernas — an arrangement that would save him a considerable amount on taxes.

Paperwork shows that the Agrokoncernas Group held around €73 million in undistributed profits in 2017. As the company’s sole shareholder, Karbauskis is entitled to the entire sum — but in Lithuania, dividends are subject to 15 percent income tax.

Official documents show that Karbauskis took no taxable dividends for years. The only exception, as Karbauskis admitted in a TV interview, came in 2017 when he withdrew dividends which he later gave as gifts to his sons. (An independent watchdog that supervises the behavior of public officials later ruled that he had violated a law on conflict of interest by failing to publicly declare them on time.)

The estate is being built by UAB Zemes Ukio Inovaciju Centras, a small Agrokoncernas subsidiary. Financial statements from Karbauskis’ businesses show that the value of the unfinished construction project alone is more than €6 million. They also indicate that most of the money came in the form of loans from the Agrokoncernas network to one its subsidiaries involved in the construction project. As such, the unclaimed profits were company funds used to build a residence likely for the owner’s personal use — enabling him to avoid paying the income tax on dividends.

But these aren’t the only taxes Karbauskis likely dodged.

Lithuanian law allows for value-added tax (VAT) to be deducted for all construction costs as long as the estate is used for company activities. Zemes Ukio Inovaciju Centras hasn’t paid any VAT so far, company director Romaldas Nagrockis, confirmed to reporters in a phone interview. This implies that the estate will be solely for company use.

But Karbauskis and his company have been inconsistent in their claims about how the property will be used. “The company has been developing the project for several years,” he explained in a written statement to 15min. “Final decisions on the development and use of the construction haven’t been taken yet.”

In written statements in April and July in response to the same questions from reporters, Agrokoncernas refused to disclose how much has been paid for the construction or in taxes, citing confidentiality agreements.

In May, the Lithuanian tax office confirmed that it was investigating Zemes Ukio Inovaciju Centras’ involvement in the construction project. 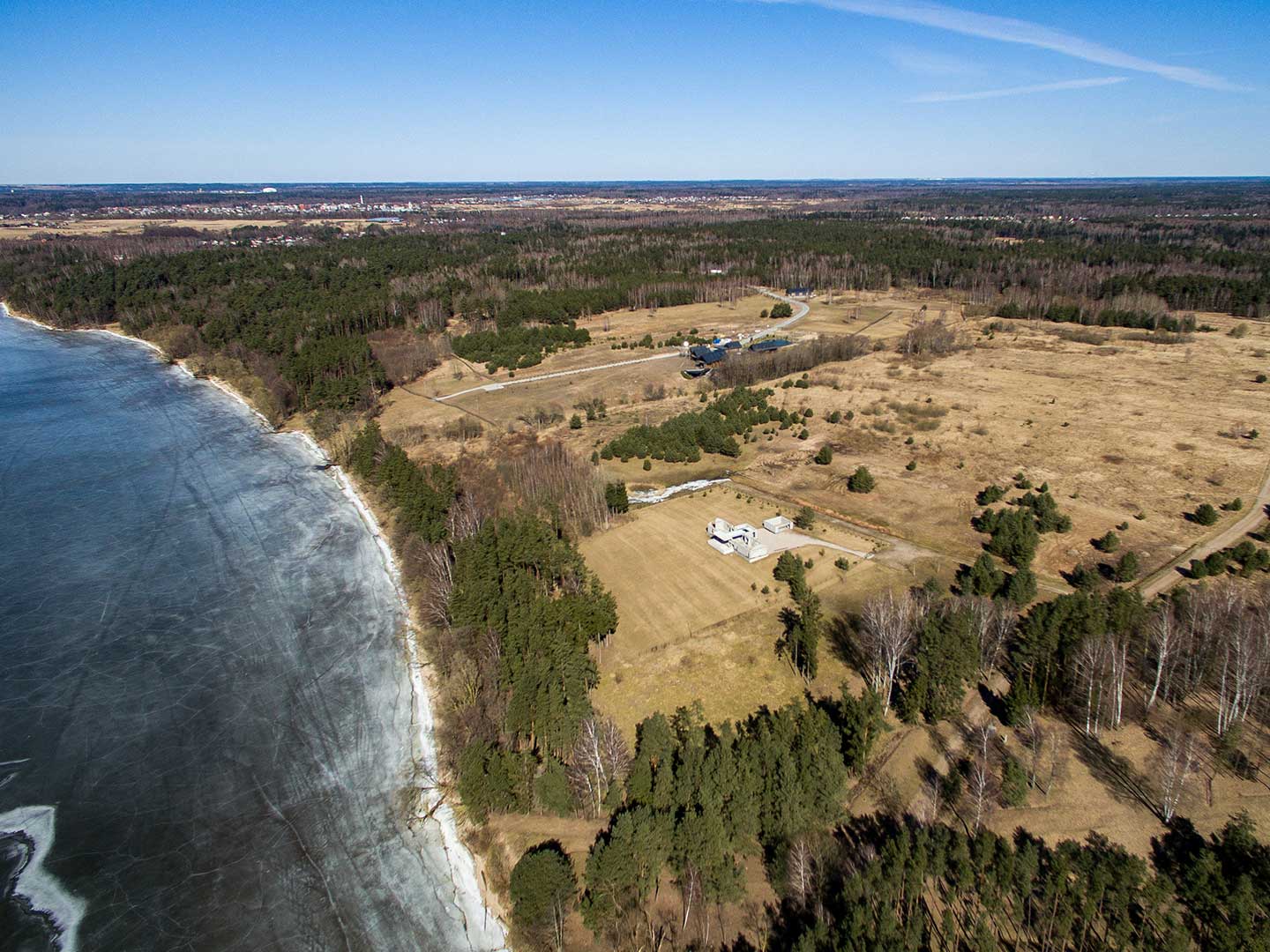 But by the time that inspection was completed in July, Agrokoncernas had still made no decision on the the final use of the property. The construction permit, issued in November 2014, states that the site was being developed “for housing and recreational purposes.”

“Tax liabilities related to the complex in development shall be qualified based on the actual use of the buildings,” the tax office explained in a written statement.

When reporters visited the site of the villa earlier this year, billboards at its entrance stated that construction had begun in January 2015. Nearly four years after receiving a building permit, Agrokoncernas still hasn’t decided what it’s doing with its building.

Ruta Bilkstyte is Lithuania’s leading tax expert. In an interview with Info TV in April, she declared that the state should have received at least €1 million from the “Karbauskis residence.”

“While considering the tax aspect of this deal, one must look at the principal purpose of the construction,” Bilkstyte said. “Is it his private residence, or... an asteroid observatory?” she said. “If it is being constructed for [Karbauskis], he should have paid the VAT.”

According to her estimates, an asteroid observatory would have to show a significant annual turnover to qualify as a development for business purposes, and therefore as tax deductible.

Lithuanian tax officials told reporters that they could not comment specifically on the Agrokoncernas construction. Reporters then described the scenario, in which a company uses funds to construct an estate for its owner’s private use. Tax officials concluded that in such a case, the house would not be tax-deductible.

Documents concerning the construction site obtained by reporters have show that the possible asteroid observatory contains an indoor pool, several saunas, and a small cinema.

Karbauskis slammed the door on reporters trying to ask about the building and these luxury features. The company in charge of construction responded with a written statement claiming that that the nature of the project is “a private matter of the company.”

This January, the parliamentary opposition tried sparking another investigation into Karbauskis’ alleged abuse of office, this time into the possible abuse of restrictions on land ownership.

Months of debate culminated in a vote on the investigation. Thanks to the “Peasants’” parliamentary majority, the initiative was defeated in May. Out of 53 votes in favor of turning down the initiative, 42 came from the “Peasants,” including one from Karbauskis himself.

Meanwhile, behind the fences, construction on Agrokoncernas’ mysterious villa continues.