Under the rule of ousted dictator Yahya Jammeh, the Gambian government signed an opaque contract with a controversial firm to manage its citizens’ identity documents. The new rulers promise a new way of doing things, but they’re sticking to the deal. 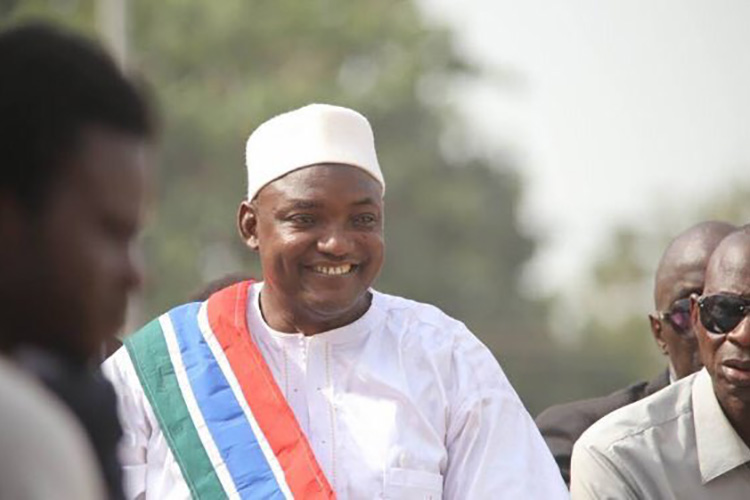 Adama Barrow, President of The Gambia since January 2017. Credit: Marvanda

Past shady dealings of The Gambia’s former rulers may be coming back to haunt the country’s new reform government as it entangles itself with a notorious company that is under investigation for corruption.

When Yahya Jammeh, the impoverished West African country’s former dictator, accepted defeat in the 2016 election and agreed to step down, the international community was stunned. Jammeh was infamous for presiding over decades of authoritarian rule and brutal human rights abuses. Now he had opened the door to wide-ranging reforms.

In some ways, Adama Barrow, The Gambia’s new president, has put the country on the path to recovery. He has released political prisoners, removed restrictions on free speech, and taken steps to attract foreign investors.

But three sets of leaked data from company and government insiders, including contracts, emails, and internal correspondence, enabled reporters to find disturbing holdovers from Jammeh’s rule.

The agreement grants Semlex a 70 percent share of the profits with the government getting the rest. The company estimated revenues of more than US$67 million over the five-year life of the contract.

Local civil society organizations have complained vigorously about the contract and say it would allow the company to gain control of the identities of most of The Gambia’s citizens and even gives it the power to say who is a citizen and who is not.

“This represents a truly bad deal to The Gambia and its citizens,” said Jeggan Grey-Johnson, head of the African regional office of the Open Society Foundations (OSF). “It’s a continuation of the state capture that occurred under the Jammeh regime.”

In response to such criticism, the national assembly launched an inquiry into the arrangement which may conclude as early as this week. Meanwhile, last week, the government issued a press release confirming that the Semlex contract was still in place and that its terms were being reviewed.

The contract’s shortcomings appear to be significant, say critics. A signed version obtained by the Organized Crime and Corruption Reporting Project (OCCRP) makes no mention of any government oversight over Semlex’s work, according to a legal opinion commissioned by the Ministry of Justice.

The contract appears to be vague in critical areas, and ultimately disadvantageous to the Gambian state in several important ways.

The contract prohibits the government from “interfering” with any third parties selected by Semlex as investors or partners. The company is also able to repatriate profits to anywhere without limits on the amount and at any time.

Perhaps the most unusual clause of Semlex’s contract with the Gambian state limits the government’s ability to cancel the contract, stating “the validity and continuity of this contract shall not be affected by any institutional change within The Gambia.”

The contract does not restrict or monitor Semlex’s role in collecting, storing, using, or safeguarding citizens’ private data. Security-related issues and the rights of Gambian citizens are never mentioned other than a vague assurance that Semlex will meet “optimal security standards” which are never defined.

There is no comprehensive data privacy law in The Gambia governing these kinds of agreements, meaning the data of Gambian citizens is vulnerable to misuse.

The contract does not spell out who is responsible for oversight on the handling of identity cards, or passports. Even who is considered an “alien” or non-citizen remains unclear.

Since the contract was signed in 2016, it has been largely unimplemented. A local company, Pristine, was given, again without bids, two contracts from 2009 through 2020 to produce identification documents and has continued to provide citizens’ identification cards for the state. Pristine’s owners told reporters that taking away their contract in favor of the politically connected Semlex would leave them deeply in debt.

Jammeh confused matters further in August 2016 when he gave another set of companies, the Belgium-based Zetex and the local company Africard, the same contract as Semlex. Reporters could find no evidence that either company has carried out any work.

Now Semlex, supported by former ministers and other powerful politicians, seems to be back on top. The government in a press release in July confirmed that Semlex is the national contractor, implying all other contracts are no longer valid.

In addition to their old contract, in January of 2017, Semlex was offered another sensitive contract, again with no apparent government oversight: to provide citizens with voter cards Critics fear that if a company is beholden to a regime for the success of its business, it might be asked to, or might willingly volunteer, to use its power over voter cards to influence elections. The country’s next presidential elections are to be held in 2022.

“The moment Semlex got a bigger contract ahead of forthcoming elections to handle voters’ cards, I knew the game was up,” says Sidi Sanneh, a former diplomat and foreign affairs minister under Jammeh. 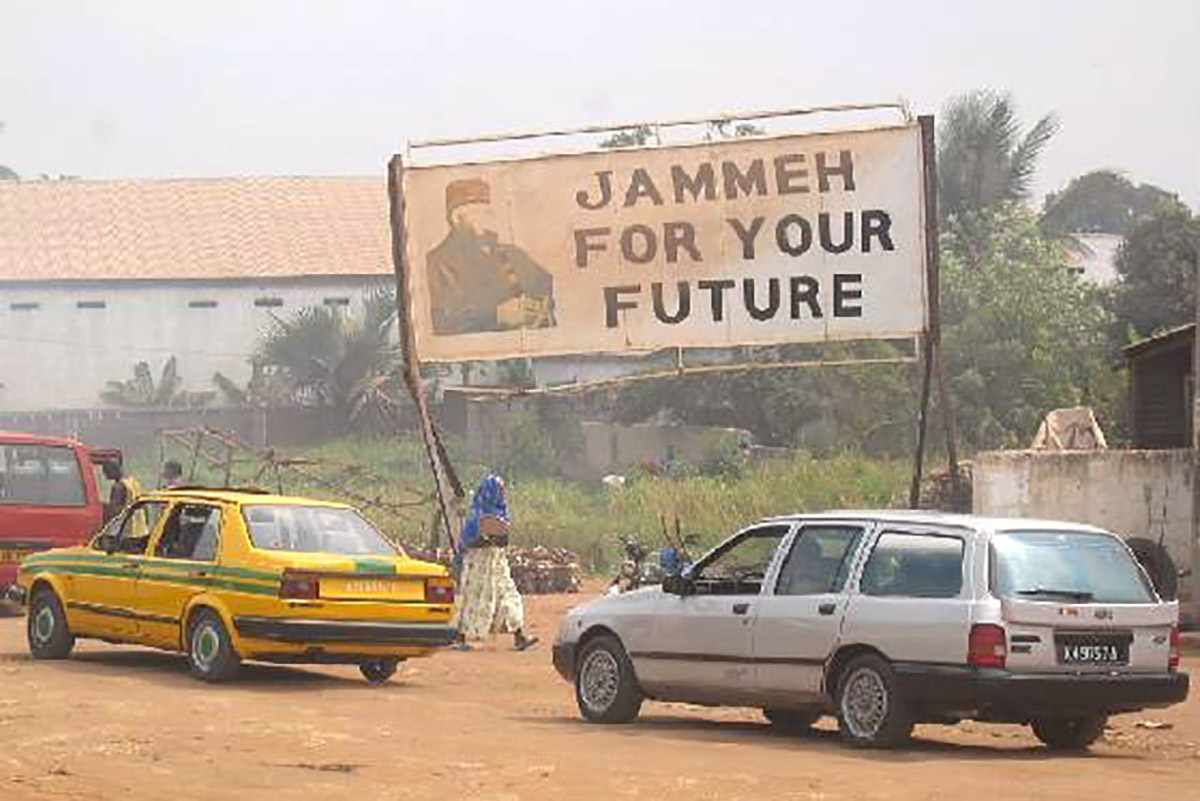 Semlex has a checkered history in Africa, tarnished by previous deals with dodgy regimes or ministers. In the Democratic Republic of Congo, Reuters wrote that an associate of President Joseph Kabila earned $60 for each biometric passport the company produced. The money was paid to a Dubai-based company linked to Semlex. In 2015, all shares in this company were transferred to the same associate of the Kabila family.

Semlex has denied the charges publicly but would not respond to OCCRP’s questions. The deal ultimately lead to a raid by Belgian police on the company’s headquarters in Brussels. A spokesman for Belgium’s federal prosecutor explained that the action concerned “possible money laundering and corruption,” according to a Reuters report.

In the Comoros, more than 100 Iranians, including some executives from the oil and mining industries who may themselves have been under international sanctions, fraudulently received passports manufactured by Semlex. The country cancelled the passports soon after. The affair raised alarm within the Comoros government, Interpol and the International Civil Aviation Organization, which sets regional standards for passports and other identification cards.

Starting Off on the Wrong Foot

The Gambia’s original deal with Semlex appears to have been conceived by Laurent Lamothe, a former Prime Minister of Haiti and director of a US-based communications company called Global Voice Group. Global Voice Group had done work in the country with GamTel, the state telecom company, but that work ended in 2007.

Lamothe approached Semlex in early 2007 to enter the biometric passport business in Africa. Lamothe contributed his local connections while Semlex brought expertise. The two companies drafted contracts and agreed to create a local joint venture called Semlex Gambia between Semlex and a company, Biometric International Group, to be run by Lamothe.

In one version of the contract, Biometric International was to earn 20 percent of the joint venture revenues, paid out as bonuses -- to whom it is not clear. On July 24, 2007, Semlex sent an email with a formal submission to the Gambian government, although it’s not clear whether Biometric International was still involved by that time. However, no deal seems to have been finalized with the government at the time.

Several other companies have been fighting over the lucrative contract including Zetex, Africard and Pristine, the current producer of identification papers.

In the summer of 2016, Jammeh’s office told Interior Minister Ousman Sonko to cancel Semlex’s contract in favour of another Belgian company, Zetex, and its local partner, Africard.

The move led to a series of conflicting claims over which company – Zetex, Pristine or Semlex – held the rights to the contract. One glaring problem emerged: not a single company was ever subjected to the Gambia’s public procurement processes. And when the new democratically-elected Barrow government did offer a bid, only Pristine responded to the call. Semlex declined to do so, alleging it already had an existing valid contract.

The government appeared to side with Semlex. It has since announced Semlex’s contract is valid and its terms are being re-evaluated. The bidding process appears to have been stopped.

While the president is allowed to “exempt any procuring organization from requiring the approval of the Authority with respect to any procurement in whole or part,” Gambian law requires such exemptions to be published in a Gazette.

For Pristine -- the local company with 200 employees that has been making ID cards -- the move is a financial disaster. Niania Dabo Touray, wife of Pristine’s now-deceased founder Mamadou Touray, said the family has invested $4.3 million to do the work and are heavily in debt. Their contract was set to run until 2020.

“Our company actively participated for years to end the tyranny of Jammeh’s regime. But within the first six months of the new regime, corruption resurfaced,” Touray said.

Meanwhile, civil society activists are worried that the review of the contract being done by the national assembly is not likely to be effective. They note the assembly committee has allocated only 10 days to the task. It is convening in a rural part of the country at a time when many assembly members may be on vacation.

“Civil society objects to the 10-day period of the inquiry, the secrecy of the committee involved and demands that the investigation, hearings and findings be made public,” said OSF’s Grey-Johnson.