Patients start gathering outside his office at the Central Hospital of Oilmen in the country’s capital, Baku, before 10 am. 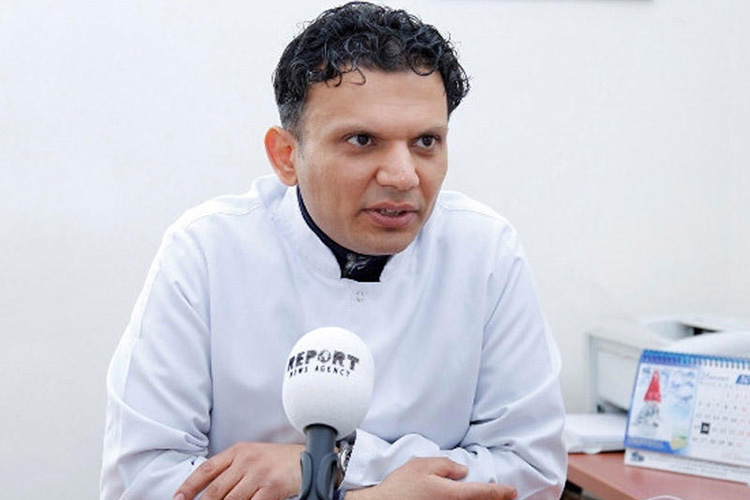 Dr. Mirjalal Kazimi, an Azerbaijani doctor who specializes in transplant operations. Both of his patients in Georgia died one week after surgery. (Photo credit is anonymous for Azerbaijani reporters’ security)

Most seem to have been referred not by physicians, but by TV.

“Are you coming because you saw Khoshghadam Bakhshaliyeva’s program?” they ask each other, referring to a popular talk show. “She’s always praising Mirjalal, saying he is a really good liver doctor.”

Kazimi specializes in partial liver transplants using live donors. He so dominates this field in Azerbaijan that when an iFact.ge reporter asked the Ministry of Health for transplant information, officials gave Kazimi’s contact information and suggested asking him.

Kazimi was happy to talk about his liver transplant operations — until iFact.ge, a partner of the Organized Corruption and Reporting Project (OCCRP), asked him about the Lancet Medical Center in Tbilisi, the capital of neighboring Georgia. “Don’t talk about Georgia,” he snapped, raising his voice. “Only my lawyer can talk about Georgia.” He soon ended the interview.

In a single week in March 2016, Kazimi performed two liver transplant operations at the Lancet clinic.

Both patients, Karlo Kekelidze, 64, and Giorgi Chubinidze, 41, died seven days after their procedures. The two men were Kazimi’s only transplant patients in Georgia.

Now Kazimi and three other doctors from his Baku transplant team, Kamran Beydullayev, Gulam Rustamzades, and Mail Sadiyev, may face charges in Georgia for fraud and for operating without a license. The fraud charge alleges the doctors took substantial fees from the patients without telling them how risky the operation was.

According to the Georgia prosecutor, Kazimi was paid 35,000 lari (about US$ 14,000) out of the $40,000 that the Lancet clinic had collected from one of the patients. The second patient was taken from his hospital bed just hours before the surgery so he could sign a $40,000 personal loan agreement with the clinic to pay for the procedure.

And in a separate court proceeding, Farman Jeiranli, the clinic’s founder, was recently sentenced to six years in prison on fraud charges stemming from illegal liver transplants and appropriating large sums from patients.

Kazimi’s interactions with the Lancet Medical Center began about 15 months before the operations took place, according to the Georgian Ministry of Health. During this period, he visited the clinic, becoming familiar with its staff, equipment, and resources and reviewing patient records.

The two men who died came to Kazimi after Lancet ran an advertising campaign saying “famous Turkish doctors” were in Tbilisi and ready to do transplants.

Georgia’s Ministry of Health said it did not approve either transplant and that one of the two operations was performed without its knowledge. The ministry’s board charged with evaluating the need for transplants voted against the operation in the one case it did know about — that of Kekelidze.

Karlo Kekelidze had consulted with doctors at several other clinics in Georgia before arriving at Lancet, where Kazimi insisted the transplant needed to be done immediately.

Although the Georgian health ministry did not agree with that assessment, Kazimi went ahead anyway, and Kekelidze died seven days later. One ministry board member said he did not know about the operation until two days after it happened.

The ministry ruled that Kekelidze’s official cause of death was kidney, heart, and respiratory failure, possible tuberculosis; fluid accumulation in the digestive system; liver fibrosis and cirrhosis.

Nestan Londaridze, a lawyer from the Tbilisi-based Human Rights Center who is working with the families of both patients, says that during Jeiranli’s trial, several expert witnesses testified that there had been no urgent reason to operate.

The liver donor was Leana Dolorenti, Kekelidze’s daughter, who Londaridze says has recovered from the procedure. Dr. Gia Tomadze, president of the Georgian Association of Transplantologists, says donors should ideally be family members because of the high likelihood of a good match.

But the health ministry says the documents submitted by the family had failed to adequately prove their blood relationship.

Natia Nogaideli, head of Georgia’s State Regulation Agency for Medical Activities, says the ministry requires a notarized document with proof of relationship between donor and patient, an informed consent document from both donor and patient, documents on their health, and a document indicating whether blood tests suggest the patient’s body would accept the transplanted tissue.

The board looks at all these documents before approving an operation. Nogaideli says that the process takes place online and the board has 48 hours to make a decision.

Before the family could provide additional proof, Kazimi went ahead and performed the 11-hour transplant. According to testimony in Jeiranli’s trial, family members said that after the operation, the patient’s feces were very dark, suggesting internal bleeding.

On March 7, 2016, four days after Kekelidze’s operation and three days before his death, the Georgian TV station GDS devoted a midday talk show to Lancet Clinic, Kazimi, and liver transplants. The clinic promised many more successful transplants and talked about starting a school for transplant operations.

Six minutes into the program, the video shows Kekelidze and his daughter side-by-side in beds. “After the operation, I feel like I’m born again,” Kekelidze says into the camera, his voice barely audible. Three days later, he was dead. 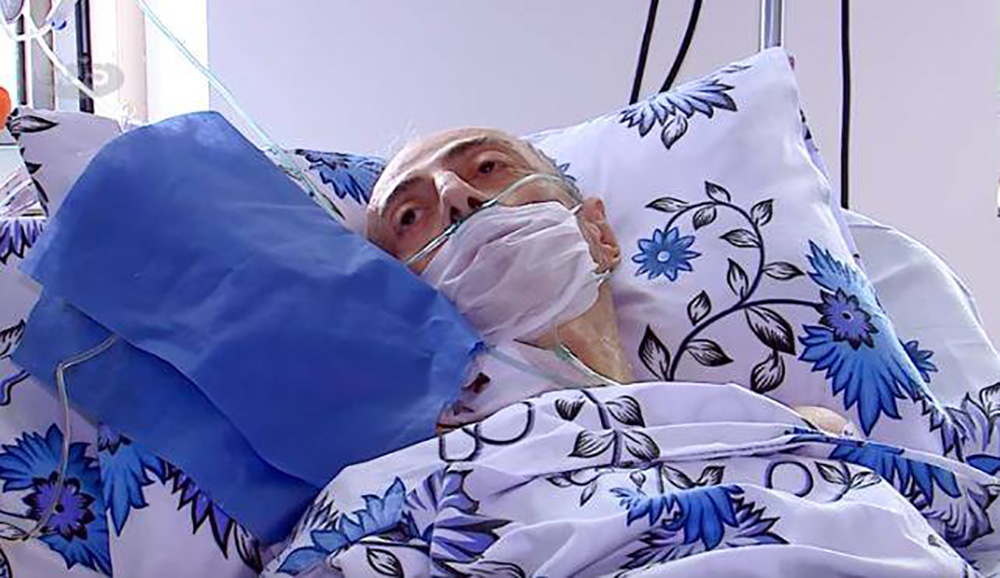 For several years prior to his surgery at the Lancet clinic, Giorgi Chubinidze had been treated for hepatitis C in Spain, according to the lawyer Londaridze. (The families of both patients chose not to talk directly with iFact reporters).

“We have a report from Spanish doctors that he did not need a transplant,” Londaridze says. “He just needed monitoring every six months or a year to check on his disease.”

But three months after returning from an examination in Spain, Chubinidze’s family saw Lancet’s ads for Turkish doctors in Tbilisi and decided to get another consultation.

Londaridze adds that when Lancet doctors said Chubinidze urgently needed a transplant, his family wanted him to go back to Spain for a second opinion. But the Lancet doctors warned that he could suffer a blood clot and die if he took an airplane flight.

According to expert medical testimony at Jeiranli’s trial, Chubinidze showed no indications that he might suffer a blood clot.

Londaridze says Lancet performed several tests to see if Chubinidze’s donor, his cousin Iona Shengelia, was suitable. She says Lancet sent test results to a German clinic for analysis and advice on the best way to perform the surgery, but Kazimi operated before the answers from Germany arrived. Chubinidze died seven days later.

Chubinidze’s family did not have $40,000 to pay for the transplant. They asked for a few days to find the money. Lancet told the family that Chubinidze needed the operation urgently and that the clinic needed a quick answer.

The clinic then told the family it could lend them the money, but they’d have to sign over their flat as collateral. According to Londaridze, Chubinidze was taken from his clinic bed in the middle of the night before his operation to sign the loan documents in front of a notary. His wife couldn’t sign for him because her name wasn’t on the deed.

The loan document was signed by Chubinidze and Giorgi Archvadze, a lawyer for Lancet. The document does not mention Lancet or specify why the loan was made. The entire $40,000 had to be repaid in one month, or interest would be added at the rate of 1 percent daily.

After his death, Londaridze says, the clinic asked the family to repay the loan. The family has refused.

According to Tomadze of the transplantologists’ association, the Ministry’s transplant board was never notified about the operation.

By way of an explanation

Before cutting the interview short, Kazimi told iFact.ge that the Georgian Ministry of Health had approved both transplants.

“The procedure is very different in Azerbaijan,” he said. “The patient comes with the relative who would be the donor, and if it is a good match, the clinic decides whether or not the operation should be done.

“I am the only doctor transplanting livers in Azerbaijan. Turkish doctors came and did three; I did all the rest. We let all patients know the the risks of the operation.”

“In Georgia, the procedure is different,” continued Kazimi. “The donor and recipient go to the Ministry of Health, and a commission decides about the operation, whether it is a good match or not.”

“There are many cases when they do not match. In Azerbaijan, we tell the recipient that your donor does not match. If they do match, we pick a date for the operation.”

According to Kazimi, he has performed 114 out of the 117 liver transplants done in Azerbaijan since 2008. He says 14 of those patients died; Azerbaijani health officials say they do not keep those statistics and referred iFact.ge to the doctor’s office.

Kazimi said the reasons varied. “Many of them can’t obtain the proper medicine, others cannot receive other necessary items.”

Tomadze, of the transplantologists’ association, wrote a report for the prosecutor’s office about what happened at the Lancet Clinic, but declined to discuss his findings.

He did, however, explain that foreign doctors need licenses to work in Georgia. Kazimi got a one-year license when he first came to Georgia, but it had expired before the two transplants. Six months after the two deaths, his license was renewed. The three Azerbaijani doctors on his team never got licenses in Georgia.

“For foreign doctors to get licenses, we check citizenship, education, resume, license in their home country, and operation activity,” Tomadze said. “We give a recommendation to the Ministry of Health, and they make a decision.”

Tomadze says Kazimi may have forgotten to renew his license. “I know him personally. He is really a nice person,” Tomadze said. “I personally gave him a recommendation to get that license. We wanted him to do transplants here.”

When asked why advertising for Kazimi said he was a Turkish doctor, Tomadze said: “Maybe it was a mistake. I don’t know if it happened deliberately or accidentally.” Kazimi did some of his medical studies in Turkey.

The Georgian prosecutor has noted that the Lancet Clinic used both television and social networks to say that a transplant surgeon had been invited from Turkey to Georgia and he would hold free consultations for people with liver problems.

Jeiranli, the Lancet Clinic director, says he is being punished on the behest of the Azerbaijani government. Pro-government Azeribaijani outlets have accused him of supporting and raising money for political dissidents. The dissidents say they came to Lancet because they felt safer there than in Azerbaijan.

The Lancet Clinic has since closed and has reopened as a Viva Medi clinic.

Kazimi told the Azerbaijan Press Agency that Jeiranli is trying to blame him for the deaths. “I received information that the expert at Jeiranli’s trial testified that there were no medical errors,” he said.“It means that accusations against Jeiranli are not connected to my operations.”

Despite the Georgian prosecutor’s contention that Kazimi received $14,000 for operating on Kekelidze, Kazimi insists he was never paid. “The main subject of that court case was financial compensation for families of patients. I declare that I received nothing from those patients.”

So far, it appears Kazimi won’t come back to Georgia for any trial. He told the iFact.ge reporter: “We are going to get an acquittal.”