Beka Gonashvili's love for Georgian folk music led him into the sheep export business nearly a decade ago. But he’s singing a sad song now, claiming that government-connected companies have driven him out of what had been a lucrative market. 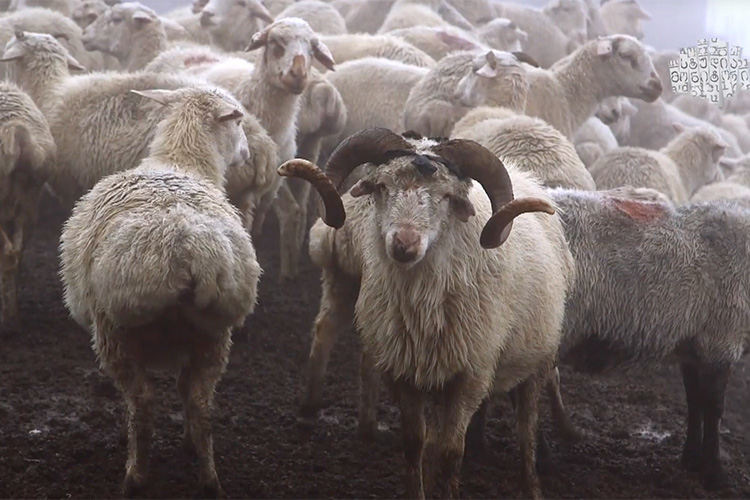 In 2008, his father's sheep business was failing, and his mother asked him to help. He told the tale to an old friend from his choir days who had moved to Turkey. His friend arranged an introduction to Ismail Yildiz, a major Turkish sheep importer.

Yildiz brought a group of Lebanese businessman to Georgia, and they liked what they saw.

Beka Gonashvili, Georgian sheep farmer and chairman of the Shepherds Association of Georgia. (Photo: Studio Monitor) The sale of sheep for slaughter is big business in Muslim societies, which eschew pork. For one religious festival, Eid al-Adha, families traditionally sacrifice a live sheep, eating some and distributing the rest to charity. That single festival creates a worldwide demand estimated at 100 million sheep every year.

Soon a rush of big-time sheep traders flocked to Georgia -- and not just from Turkey. Within three months, prices shot up.

“They would arrive in groups from two or three different Arab countries,” says Dato Utiruidze, a sheep farmer from Georgia’s remote and mountainous Tusheti region. “We would herd sheep to a bridge, and they would buy them all, no questions asked.”

Another Tusheti sheep farmer, Musakhan Uzbashiev, remembers those days fondly: “Sheep had been worth nothing. I would trade one for a sack of flour. Then, in 2008, foreigners became involved, and the prices skyrocketed. Suddenly they were worth $60 apiece.”

According to Georgian government statistics, in 2008 there were just two companies exporting sheep, and they shipped only to neighboring Azerbaijan. By the end of 2009, 21 new companies had formed and were exporting to Armenia, Jordan, Lebanon and Saudi Arabia.

The statistics show that the number of sheep exported increased more than ten-fold during that period, even as the price per animal increased by about half. In 2008, 25,271 sheep worth about US$ 1.1 million were sold abroad; the following year, exports shot up to 266,540 sheep worth $17.1 million.

Georgian sheep farmers say the buyers snapped up their sheep because they were grass-fed, healthy, and tastier than the alternatives. They say sheep from neighboring Armenia, by contrast, sold for less because they were partially grain-fed and sometimes suffered from common sheep diseases.

But, for most of these companies, the sheep-export boom was short-lived. Within two years, the start-ups began to shut down; by 2013, only five exporters were left.

As of 2017, only four remained. Two of them ship only small numbers of sheep next door to Azerbaijan -- and the other two have an apparent connection to a former Georgian Minister of Agriculture who now heads the Agriculture Committee in Parliament.

And as the new companies were folding, Georgian sheep farmers say a second trend was developing: Cheaper sheep from Armenia began to be imported into Georgia, where they were kept for a few months before being sold abroad as Georgian sheep for a higher net profit.

Connected companies thrive while others wither

The two companies linked to the former minister are Victoria LLC and Alkernazi LLC, founded nine days apart in late summer 2013 and registered at the same Tbilisi address. Victoria LLC has more than 100 employees and continues to export sheep to Saudi Arabia, Azerbaijan, and Iran. Alkernazi was founded by a citizen of the United Arab Emirates and has since changed its name to Alturasi; no further details are known. 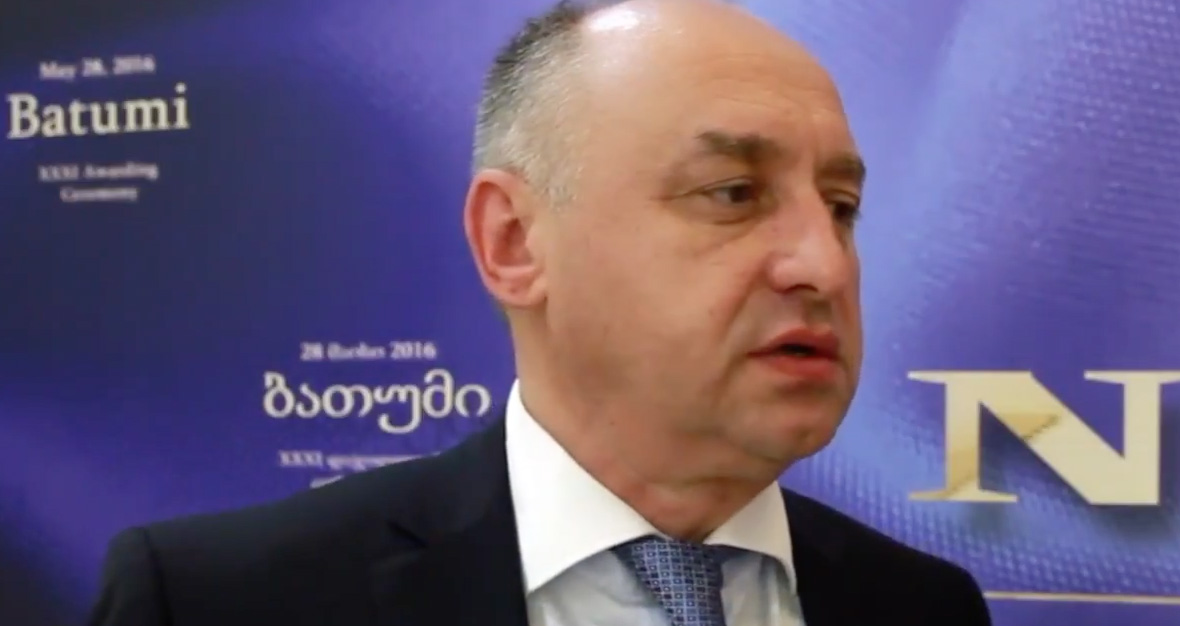 Gia Adamia, founder of Victoria LLC. (Photo: Studio Monitor) Victoria LLC was founded by Gia Adamia. His nephew, Giorgi Adamia, is a close friend and former classmate of Otar Donelia, the Minister of Agriculture from 2014-2016 and since then a member of Parliament and chairman of its Agriculture Committee.

Sheep farmers who have quit the export business claim that government favoritism for these two companies -- and bureaucratic roadblocks for everyone else -- drove them out of what had been a profitable business.

Gonashvili says his company was squeezed out in 2013. “I realized I couldn't meet their criteria, including quarantine arrangements, blood tests, brucellosis (a bacterial disease) tests, and everything else. But somehow, a couple of companies managed it.” 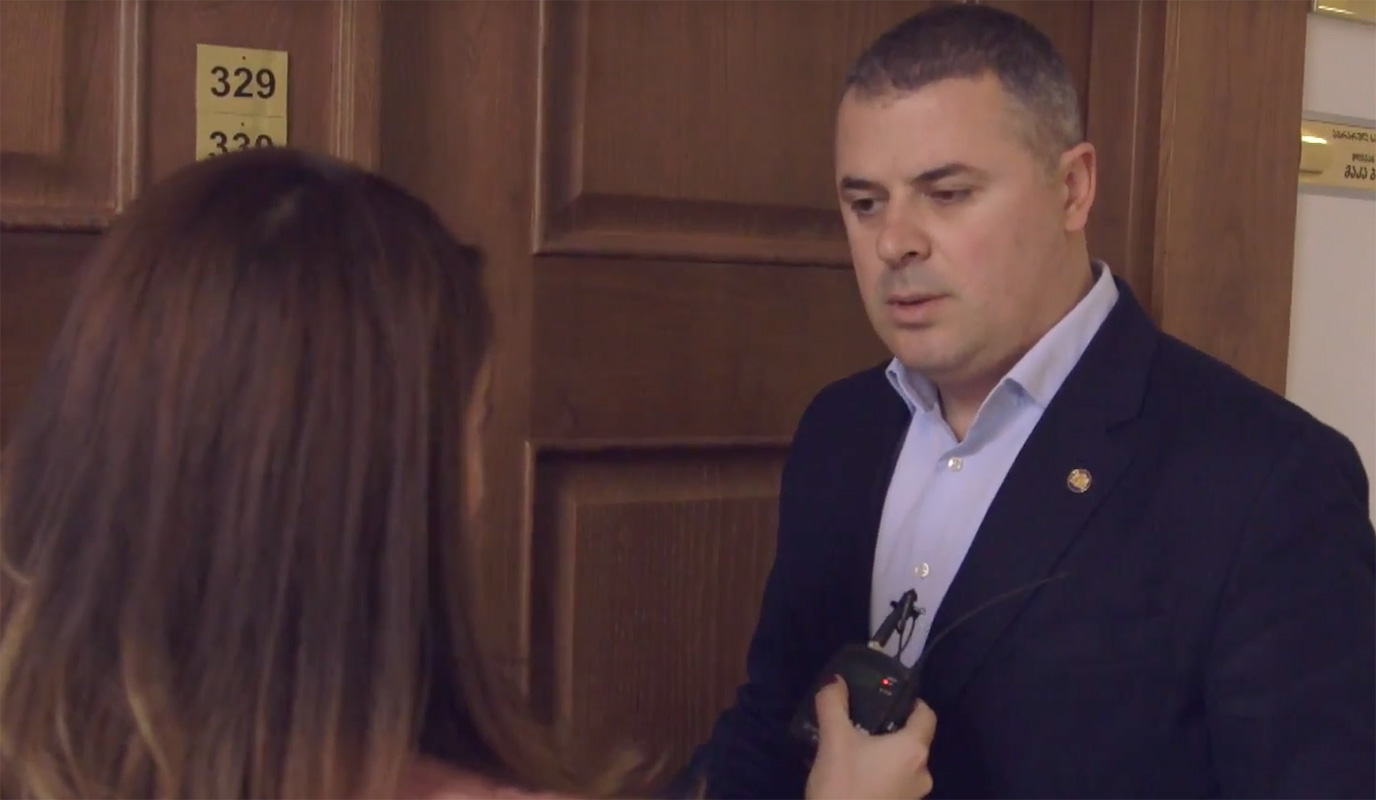 Otar Donelia, former Minister of Agriculture, interviewed by a Studio Monitor reporter. (Photo: Studio Monitor). Yildiz, the Turkish businessman whose entry into Georgia first boosted the prices and who suppliers say spent tens of millions of dollars on sheep, said he pulled out of the Georgian market in 2015. “Because the sheep farmers who supplied me suddenly encountered problems, my Arab partners parted with me and turned to other companies,” Yildiz said in a 2015 TV interview with Zviad Tkhelidze. “I always paid cash and never had any difficulties with the sheep farmers.”

In a recent phone interview with Studio Monitor, Yildiz explained that in 2014 -- the year Donelia became Minister of Agriculture -- he “was called in by the (Georgian) financial police.”

“They were investigating me,” he said. “I asked them why. I told them I was willing to pay overdue taxes if I had missed a deadline, but they said no to that. I hired a lawyer, and then I never heard from them again.”

By comparison, Victoria LLC is still a thriving Georgian company that, according to one leaked document, continues to export sheep jointly with Alkernazi.

A reporter for Studio Monitor, an OCCRP partner, asked former minister Donelia how his friend’s uncle managed to succeed in a business when so many others were failing, and why the number of exporting companies had dropped so precipitously.

He also denied knowledge of a letter sent to him from Victoria LLC in March 2015. That letter, a copy of which was sent to journalists by a whistleblower, asked if the quarantine period for sheep imported to Georgia could be reduced from six months to one month:

“Since our country is unable to meet this demand, we are forced to consider importing sheep from neighboring countries. However, we are prevented from doing so by regulations for veterinary services and certification of origin, which requires (sheep) to stay six months in the host country.”

The National Food Agency wrote on March 23 that it agreed to the request “in the best interests of the country.” (6) So far, the law on the books has not been rewritten and the legal quarantine period remains six months.

When contacted by phone, Victoria LLC founder Adamia denied writing the letter. He promised to sit for an interview, but later refused and stopped responding to phone calls.

An invitation to fraud

Meanwhile, Gonashvili claims that sheep exports from Georgia are so potentially profitable that the business invites fraud. He says that for $5 a head, fake documents can be drawn up that falsely state an Armenian-born sheep is Georgia-born, which allows it to be exported in one month or less.

The mark-up involved is significant. According to Yildiz, the Turkish importer, the profit on genuine Georgia-born sheep was $2 apiece, while the profit on cheaper sheep imported from Armenia and then falsely marketed as Georgian was $20 apiece or higher.

With the assistance of an OCCRP partner in Jordan, Studio Monitor found that all sheep exported from Georgia to Jordan in recent years were listed as Georgia-born, while no sheep imported into Jordan were listed as Armenia-born.

Allegations of sheep diseases have also roiled the export market. Georgian sheep owners claim that some sheep imported from Armenia carried sheep pox, and the National Food Agency (NFA) confirms that the pox – which does not harm humans but can kill sheep – hit the industry in 2015-16.

Gonashvili further says that a ship loaded with 13,000 sheep owned by Victoria LLC was turned away by Saudi Arabia in the spring of 2015 because the sheep were infected with brucellosis, a highly contagious bacterial infection that can be passed to humans but is rarely fatal.

And allegations of fraud dog other cross-border transactions. According to Georgian records, after several years of brisk trade, Jordan abruptly stopped importing sheep from the country in 2015. Georgian government officials said they never received any formal notice explaining why.

Sami Adouat, the assistant general director for Animal Resources for the Jordanian Department of Agriculture, said Jordanian inspectors stopped buying Georgian because they began seeing the same kind of scam the Georgian farmers reported – only this time involving Georgian sheep passed off as Jordanian.

Georgian sheep farmers say they can no longer find an export market, and with increases in taxes and rent for pasture land, they're not breaking even. Some simply burn tons of wool in the mountains rather than trying to sell it in the cities.

After a Monitor TV story aired in June, current Minister of Agriculture Levan Davitashvili promised to tighten the import and quarantine rules so no sheep imported from other countries could be sold as Georgia-born.

With additional reporting in Jordan by Naima Chougui of ARIJ, Arab Reporters for Investigative Journalism.

Click here for a video version of this report by OCCRP partner Studio Monitor.