The official photos of the May 31 inauguration of Aleksandar Vucic present an idyllic scene  --  for good reason.

Even as Serbia’s new president pledged to do his utmost to preserve “human and minorities’ rights and freedoms,” men outside the building were forcefully removing inconvenient protesters and journalists. 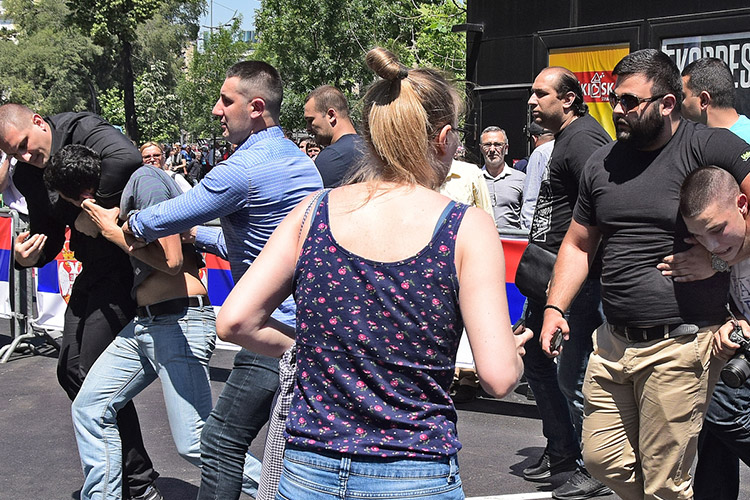 Then they turned against a woman reporter for the newspaper Danas, who was trying to interview an elderly man holding an anti-government banner.

“Stop taking photos or I‘ll take that phone from you,” one of the men commanded, before lifting her up and carrying her away.

A man held a photographer by the neck while another grabbed his arms to prevent him from taking photos of protesters. Another photographer documented the scene.

After the event, Vucic first apologized, then justified the violence, saying that the men had been doing their jobs providing security for the ceremony.

In an official statement, his Serbian Progressive Party (SNS) criticized media outlets that reported on the violence, accusing them of biased coverage in favor of anti-Vucic protesters.

“Those same outlets are [now] lynching the SNS guards who prevented incidents by the protesters, openly targeting them and portraying them as some kind of a monstrous group of bullies,” the statement read.

The victims later said that none of the attackers explained who they were or had any identifying insignia that would show they were there in an official capacity.

KRIK, a Serbian partner to the Organized Crime and Corruption Reporting Project (OCCRP), found that at least one of them did have links to a notorious underworld figure.

In Serbia, collusion between criminals and government officials stretches back to the breakup of Yugoslavia in the early ‘90s. Football hooligans supported the nationalistic cause of late Serbian President Slobodan Milosevic, and even fought for the cause in organized paramilitary units.

One of their most notorious leaders was Zeljko Raznjatovic, known as Arkan, who recruited a brutal paramilitary force widely known as the “Tigers” from the ranks of Belgrade’s soccer hooligans. The group’s crimes earned Arkan a indictment from the UN war crimes tribunal in The Hague, but he was killed in 2000 before any further action was taken.

Ever since, soccer hooligans have played an important role in Serbian politics.

KRIK found evidence that the connections among the Serbian government, the criminal underworld, and the soccer hooligans did not end with the arrival of Vucic, the country’s new pro-Western president.

A young man in a blue shirt, shown firmly pinning the arms of a protester in one of the inauguration photos, is an associate of one of Serbia’s most notorious underground figures, reporters found. 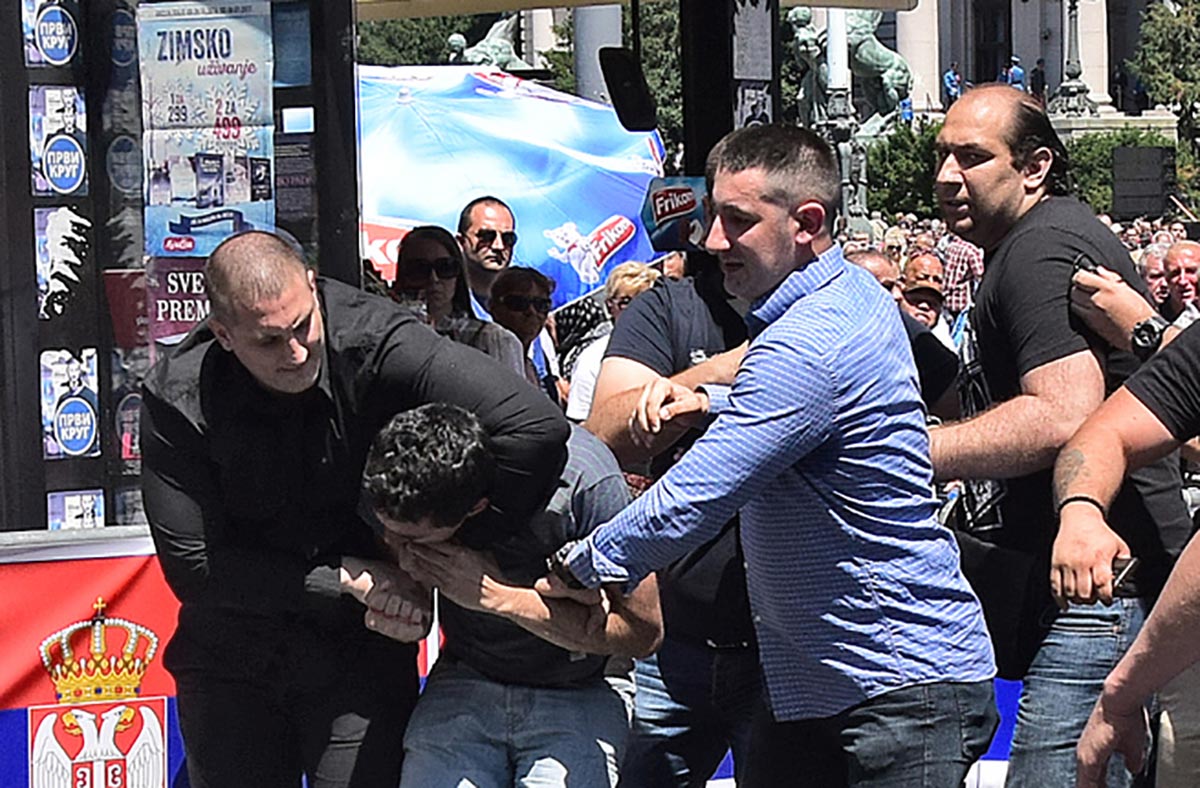 According to his Facebook profile, Borko Aranitovic -- who sometimes works as a security guard on Belgrade’s party barges -- is close to the crew of Aleksandar Stankovic, an underworld boss assassinated last October better known as “Sale the Mute.” Stankovic was convicted of leading a criminal group that was dealing drugs but never served his sentence after convincing judges 12 times to postpone it, claiming to have a medical condition. He was also known as the leader of the Janjicari, violent football hooligans associated with the Partizan team.

Reporters identified Aranitovic by comparing his Facebook photos with those from the inauguration. They clearly show the same person -- a young man with a striking profile, a mole on his chin, and what appears to be a scar on his head. 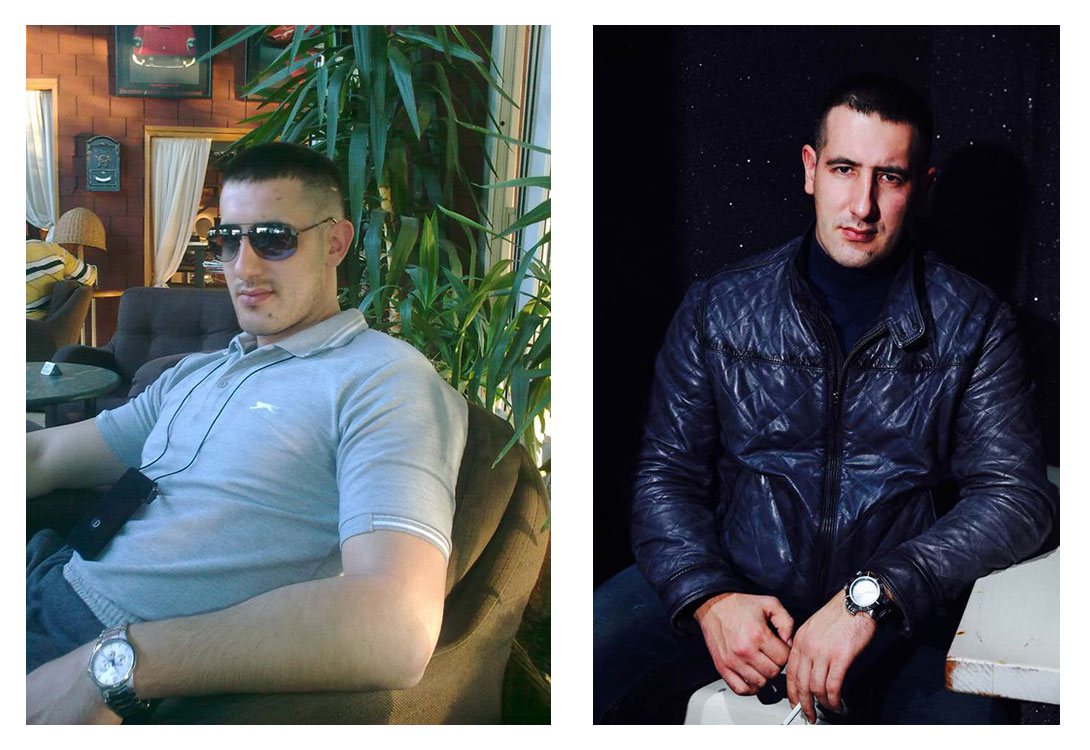 Other photos on his Facebook page show him working as a security guard on the “Freestyler,” a nightclub barge moored on Belgrade’s Sava river. He is also seen with members of Sale the Mute’s gang.

He again appears in their company in a security camera video that shows the gang beating Zoran Jaksic, a leader of the deadly Group America, a former murder squad that has become a major global drug wholesaler. Jaksic is currently on trial in Peru for drug trafficking.

The footage went public after a video of someone watching it -- and laughing along -- was published by Kurir and Blic, two popular dailies. Kurir identified the voice as that of Nenad Vuckovic (“Vucko”), a member of a special police force called the Gendarmerie.

Vuckovic’s connection to Sale the Mute and his gang has been amply demonstrated.

He is mentioned in a criminal complaint filed against two military officers suspected of letting him and Sale the Mute use an Army shooting range, weapons, and ammunition for target practice.

And when Sale the Mute was assassinated, an obituary submitted to a newspaper -- signed by “Vucko” -- read: “Last greeting to my best man.” Shortly afterwards, a photo of the two men cheering at a Partizan football match appeared in the media. 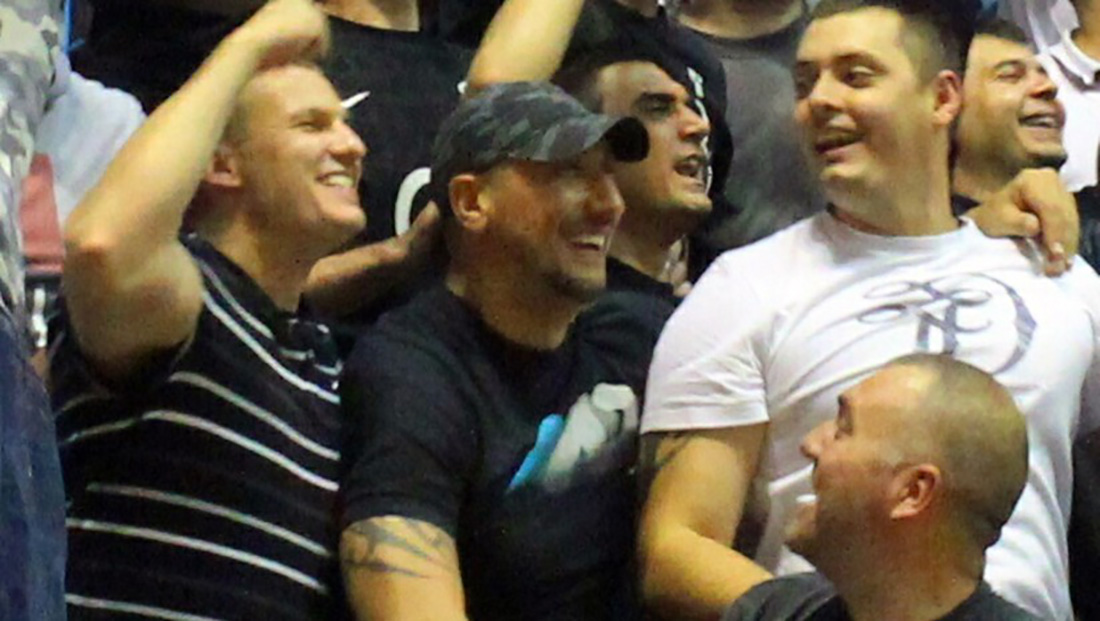 Their association demonstrates the personal ties between Serbia’s underworld and its law enforcement apparatus.

Police Minister Nebojsa Stefanovic did not see Vuckovic and Stankovic’s friendship as a problem. “Cheering is not against the law,” he told journalists.

Aranitovic’s Facebook profile provides the newest evidence of their association, featuring a photo of him with Vuckovic, the special police officer Vuckovic.

There is no investigation into Vuckovic‘s links to criminals, the Interior Ministry told KRIK.