Ukraine: No Soldiers for Soldier's Land 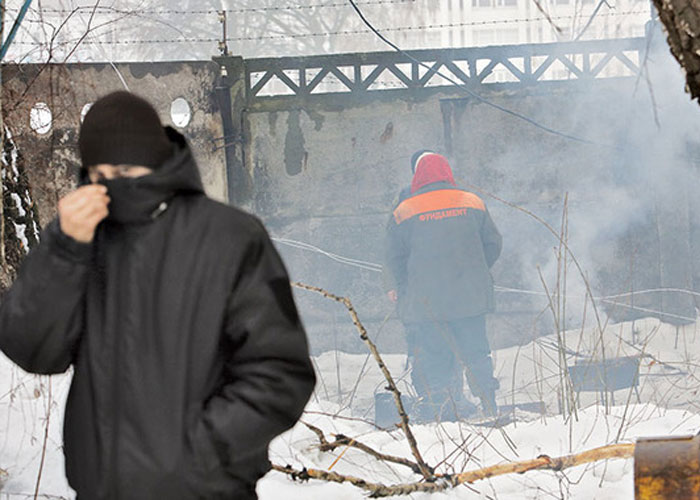 A man covering his face is seen at the construction site of a residential high-rise development in Kyiv’s Holosiivsky district on Jan. 27. Local residents have staged protests believing the project threatens the nearby park and urban infrastructure. (Photo by: Volodymyr Petrov) The Security Service of Ukraine (SBU), Ukraine’s intelligence and investigative agency, promised to provide apartments to families of Donbas war veterans in a 13-building residential estate under construction in the southern district of Kyiv, bordering a 4,525-hectare (11,200 acre) national park.  The prime land was given to the SBU for its use but was zoned for military purposes only.

However, the law enforcement agency has backed down from its pledge and now most of the apartments instead will be sold to anyone with the money to buy them. According to the SBU’s official website, only 10 percent of the flats in the Bergen Complex near the city’s biggest park in the Holosiivsky district --327 apartments out of 3,269 --will be owned by SBU employees who are also veterans of Russia's war against Ukraine.

However, doing so would violate a law that requires the dwellings on government-donated military land to be used only for military personnel, their families, or free or subsidized housing for the needy.

The agency has pointed to an executive branch regulation promulgated in 2011 which establishes a formula for allowing commercial construction on military land.  However, parliamentary law usually trumps such regulations.  The conflicting laws have opened a loophole that the agency is using.

Meanwhile, members of the local community have picketed the construction site. They believe the project is a threat to the nearby Holosiivsky National Park and that it will increase traffic in the area. 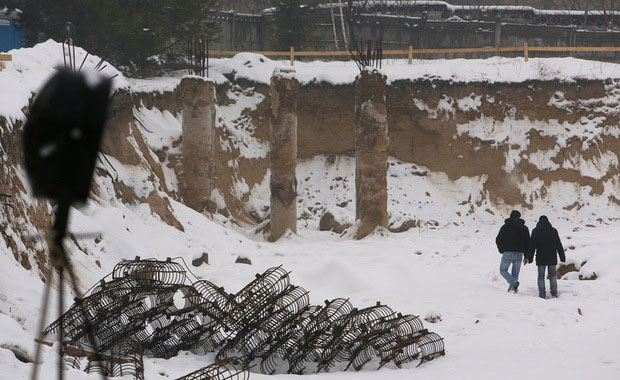 A site of a residential high-rise development in Kyiv’s Holosiivsky district on Jan. 27. (Photo by: Volodymyr Petrov) The development has been controversial since its beginning.

The SBU originally said that the apartments would be allotted to Donbas war veterans, families of slain soldiers, and relatives of those who “sacrificed their lives,” according to SBU spokeswoman Olena Hitlyanska. Those who “need to improve their living conditions” would also be accommodated, the SBU stipulated.

In response to the worries about such a huge complex next to the park, in late December Volodymyr Kiptenko, head of the SBU’s procurement department, told the protesters that the construction would be “put on hold.”

But that didn’t happen.

Instead, during a protest on Jan. 20, hired thugs – known as “titushki” – were spotted near the construction site. They subsequently tried to disperse the protesters.

Construction company representatives said the strongmen were not titushki but had been hired to “check who’s behind the protesters.”

Hitlyanska said earlier that SBU officials would be prepared to meet with local residents to explain that they are going to provide social housing.

Activists, however, are still waiting.

One of them, Kyrylo Kyforuk, opposes the construction. “It’s another business construction which is hiding behind the label ‘for servicemen,’” he told OCCRP partner Kyiv Post. “Meanwhile, there are lots of ads about selling apartments around the city and even a sales office has opened.”

Indeed, there are numerous colorful billboards in the Holosiivsky district advertising apartments for sale in the residential complex for Hr 13,100 (US$ 500) per square meter, about average for the current market.

In response to questions from the Kyiv Post, SBU stated that they have all the necessary permits for the construction, claiming that no violation of the law has taken place. The agency didn’t comment on the fact that 90 percent of the apartments at the residential complex will be sold, citing a government resolution from July 6, 2011 which establishes the scheme of commercial construction on “defense land” in exchange for providing apartments to the military.

Parliamentarian Ihor Lutsenko, said SBU is being “parasitic” toward the war veterans, using them as a pretext.

“In reality, (SBU) just provides an opportunity to make money for certain commercial structures,” says Lutsenko. “And the overall practice, when state agencies start construction on their land and then 80 percent of the apartments go to the construction company, is corrupt.”

The process began in November 2012, nearly 18 months before hostilities erupted, when the SBU obtained a development permit from the Kyiv City Council. The service got the green light to start construction from Ukraine’s former prime minister, Mykola Azarov, who issued a special decree in 2013.

According to the land cadastre, the land in question is controlled by the SBU, but it also stipulates it can be used only for “defense purposes.”

However, housing in the Bergen Estate, named for the Norwegian city, is being advertised for sale to the public at market prices.

The SBU first announced a call for proposals to build the estate in February 2014. According to the bid specifications, the complex was to consist of 13 buildings of between 16 and 22 stories each. According to documents published on the SBU website, at least 329 apartments, or 17,625 square meters, had to be given to the SBU.

In August 2014, however, a new bid was announced – with no mention of the tender process re-starting – in a special section of the SBU’s website. The SBU later deleted information about Arkada’s initial winning bid from its website.

According to Arkada company lawyers, the company failed to agree on the terms for sharing the construction and commissioning rights to the project with the SBU, an agreement Arkada needed in order to sell mortgages for the property. The company then stopped working with the SBU.

A new winner – Housebuilding Company No. 7 – was announced after the SBU changed the details of the project to make the deal much sweeter. The SBU decreased the minimum number of apartments it should get to 323, while removing any limitations on the height of the buildings. Afterward, the winner said its buildings would range from 25 to 27 stories.

The organization that stands to earn the most is Housebuilding Company No. 7, a company that is listed as being owned by Roman Bielik, a resident of Stovpyahy village in Kyiv Oblast, and an asset management company representing unknown beneficiaries. It is possible Bielik, an attorney who could not be reached, may be a proxy for another party.

In July 2015, the building company’s head and former owner, Oleh Chenchyk, told the Levyy Bereg website that Bergen is a “social, not a commercial project, so the apartments will not go on sale.”

But in an interview with the Kyiv Post on Jan. 27, the deputy head of Housebuilding Company No. 7, Yuriy Sokolnytsky, said this was not “precise information,” as a number of undisclosed investors are financing the project.

“The social focus of this project doesn’t mean that investors who are investing their money won’t get a profit – they will… But it can’t be a VIP project, it’s an economy class one, as some of the apartments will be given to SBU employees. The others will be sold,” he said.

Despite the SBU issuing a decree on Dec. 29 asking the construction company to consider halting their work “because of public tension,” concrete mixer trucks continued to be seen entering the controversial residential development.

Sokolnytsky said the company used several people “their contractor hired” to make sure the mixers make it to the site.

“We wanted to find out who is behind residents’ protests against the construction, that’s why we used those guys – they are not titushki,” Sokolnytsky added. “They were there just for two days. I instructed them, they were not allowed to use any force. We have an agreement where deadlines were set,” Sokolnytsky said. “Now what? Stop construction? Then who’ll pay for the expenditures?