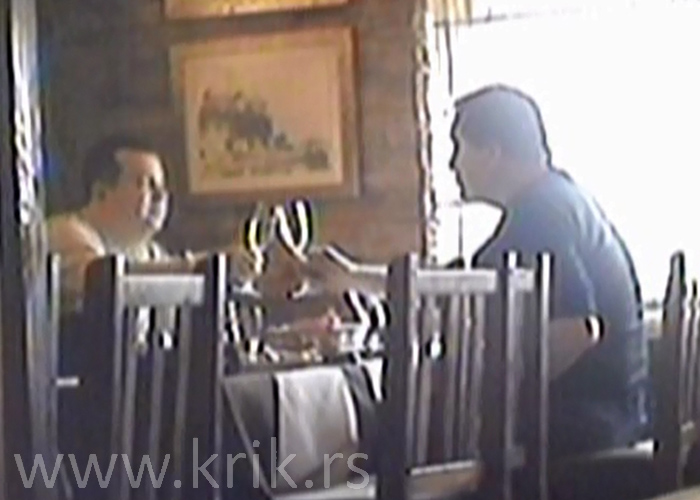 Balkan drug gang boss Rodoljub Radulovic has met nine times with officials of the Serbian Ministry of Police, according to intelligence videos obtained by KRIK.

Two of the meetings were with Ivica Dacic, who previously served as prime minister and minister of police, and Ivica Toncev, his advisor for national security.  The meetings took place while Dacic was head of the police and Radulovic and convicted drug lord Darko Saric were arranging large shipments of drugs to Europe from South America.

Dacic is currently serving as chairman of the Organization for Security and Co-operation in Europe (OSCE) and as Minister of Foreign Affairs for Serbia.

Based on the videos, the meetings with Dacic and Toncev seem cordial, even warm, with the men kissing each other and raising toasts.

The meetings were recorded with hidden cameras by agents of the Serbian intelligence agency, the Bezbednosno-Informativna Agencija (BIA), who monitored Radulovic’s activities as a member of a drug trafficking clan during Operation Most (bridge). The videos do not have sound. The meetings took place from November 2008 through April 2009 in Belgrade in restaurants, cafes, a parking lot and a park.

Besides Dacic and Toncev, the videos show Radulovic also met with Branko Lazarevic, who was then Dacic’s chief of cabinet, and Vanja Vukic, deputy chief of cabinet. At the time the meetings were occurring, Radulovic was preparing a shipment of 1.8 tons of cocaine from South America to Europe using his ships “Golden” and “Verty.”

Prosecutors say Radulovic was working for Saric, the Balkan narcotics baron, who was recently convicted of smuggling 5.7 tons of cocaine from Latin America to Europe and sentenced to 20 years in prison. Radulovic was also sentenced in that case to 12.6 years for his role in the smuggling, but has absconded and his whereabouts are unknown.

The meetings and the 1.8-ton drug shipment occurred in April of 2009, when cocaine was hidden in shipments of soybeans traveling from Argentina to Europe. A special task force including Serbian police, Serbian intelligence officials and agents from the United Kingdom’s Serious Organized Crime Agency was monitoring the group and planned to seize the drugs in Greece.  Through a leak from police, the gang found out about the investigation and unloaded the cocaine on the Spanish coast instead.

One of the smugglers who later become a protected witness, Drasko Vukovic, testified in the Saric case that in late 2008 an insider at the Ministry of Police was informing Radulovic about ongoing investigations into the drug operation. Vukovic said he was never told who the informer was but afterwards he was ordered to change the way the group was communicating to prevent the police from monitoring them further. The gang instead started exchanging information in drafts of unsent emails to avoid scrutiny.

Lazarevic is the only person seen in the videos who is being prosecuted for leaking information to the smugglers and will go to trial soon.  However, in his pre-trial defense, Lazarevic said he didn’t provide any sensitive information, but only gave Radulovic general information from a police database which contains criminal histories and traffic warrants. Lazarevic said his boss Dacic was the one who introduced him to Radulovic. He refused to comment on the case to OCCRP/KRIK reporters.

Dacic, Vukic and Toncev have not been charged and there is no indication they are under investigation.

Toncev, Dacic’s advisor, told OCCRP/KRIK that he never gave Radulovic any state secrets, describing their meeting as a business meeting. Toncev, as earlier reported by OCCRP, had meetings with other members of criminal gangs.

Also, OCCRP reported in late 2012 that Dacic’s Socialist Party of Serbia rented space in its headquarters to Saric, where he established a high-end nightclub called Vanilla.

Vukic told KRIK/OCCRP reporters that he never met or spoke with Radulovic, although one of the videos clearly shows them talking on the street.  Radulovic is holding a white folder.  An identical white folder is shown in Vukic’s possession at a café one hour later.

Vukic, possibly unaware of the existence of the video, said “[Radulovic] was recorded in the moment he was passing next to me. In that moment I didn’t even know who he was.” Vukic said he was sitting in a café with his girlfriend and her sister and he never received anything from Radulovic.

The issue of Dacic’s relationships with drug traffickers has come up before.  Dacic and members of his cabinet were in conflict with the police after several police reports were leaked to the public which listed calls between Dacic and Radulovic. Dacic held a press conference and said that, although he was heading the police, he didn’t have direct knowledge that the man he described as his “friend,” Radulovic, was a crime figure.

Dacic survived the political scandal. When Aleksandar Vucic’s Serbian Progressive Party won the 2014 elections, he formed a new government with Dacic’s Socialist Party of Serbia - even though Dacic’s party was not needed in a coalition. Dacic was appointed Minister of Foreign Affairs with Toncev as his advisor.

Although Lazarevic is about to go on the trial, he still works in the Serbian embassy in Athens.

The videos show Radulovic having the following meetings: