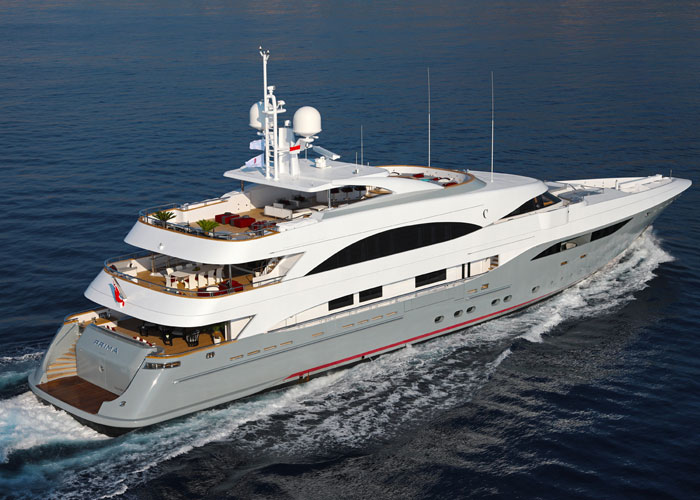 Friends and family of President Ilham Aliyev make free use of two luxury yachts worth US$ 59 million that are owned by the State Oil Company of Azerbaijan (SOCAR), the organization charged with managing the country’s oil wealth for its citizens.

That means the yachts deprive Azerbaijani citizens of about US$ 12 million per year in oil profits—the amount experts say such yachts typically cost to run. That’s in addition to the US$ 2,000 worth of fuel per hour that the yachts consume.

It’s not the first time SOCAR has been so accommodating to the Aliyevs. The First Family previously used SOCAR to register their US$ 25 million London mansion.

Former crew members on one of the yachts told OCCRP that Aliyev, his family and inner circle have regularly used the yachts, often when visiting glamorous destinations such as Saint-Tropez and Cannes on the French Riviera.

Three other former crew members told reporters for the Investigative Reporting Project Italy (IRPI) that they were often sent on long trips across the Mediterranean to mislead media or just so the Azerbaijani VIPs could have lunch on the boats – at a cost of more than $100,000 in fuel.

The yacht revelations come in the wake of news reported by OCCRP that the Aliyev family owns many of Azerbaijan’s key businesses and controls hugely expensive properties disproportionate to its known sources of income. The family has significant stakes in banks, luxury hotels, mining companies, construction companies and the telecom industry.

Allegations of corruption on the part of the First Family have been consistently denied by Azerbaijani officials. 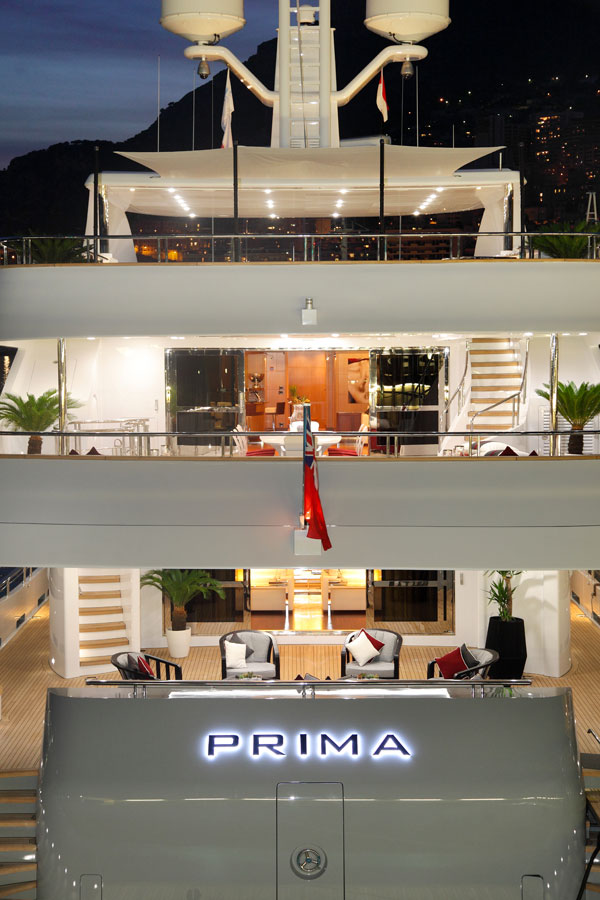 The Prima is currently docked at Porto Cervo in SardiniaThe 54-meter Prima is one of the two yachts known to be enjoyed by the Aliyev family. Its asking price at the time of sale in 2012 was € 24.5 million (around US$ 32 million at the time).

Its lavish interior accommodates 12 guests, and its common areas - all 350 square meters of them – are decorated with marble, leather and drapery. Prima reportedly “boasts an exquisite Italian character, with high-end furnishings throughout, and a well-chosen color palette,” according to sales literature.

A former crew member who worked on Prima told IRPI that the Aliyev family had used the yacht, although their visits were not as common as others.

More often, the yacht was used by persons close to the First Family: ministers, bodyguards and their families. A frequent guest was Transport Minister Ziya Mammadov, whose family is known for its dealings with the Aliyevs and its lobbying efforts to boost the image of Azerbaijan in the West.

Crew members said those who used the yacht could be remarkably circumspect; when an Azerbaijan-France congress took place in Cannes in 2013, officials only used Prima as a place to dine, and stayed overnight in hotels out of fear of being spotted by journalists.

Azerbaijani General Beyler Eyyubov, a man described as Aliyev’s right-hand man, came aboard several times, visiting with numerous bodyguards and families in Porto Cervo, an exclusive resort in Sardinia. “They never slept on the yacht, and they used to spend their time in the most expensive hotel, spending something like € 45,000-50,000 (US$ 51,000-57,000) per night,” the crew member said.

Professional yacht crews are hired for their skills and their discretion. Crew members asked that OCCRP not identify them lest they risk losing future assignments. That was especially true of the Prima: staff members were often chosen for their ability to keep their mouths shut rather than their technical skills. 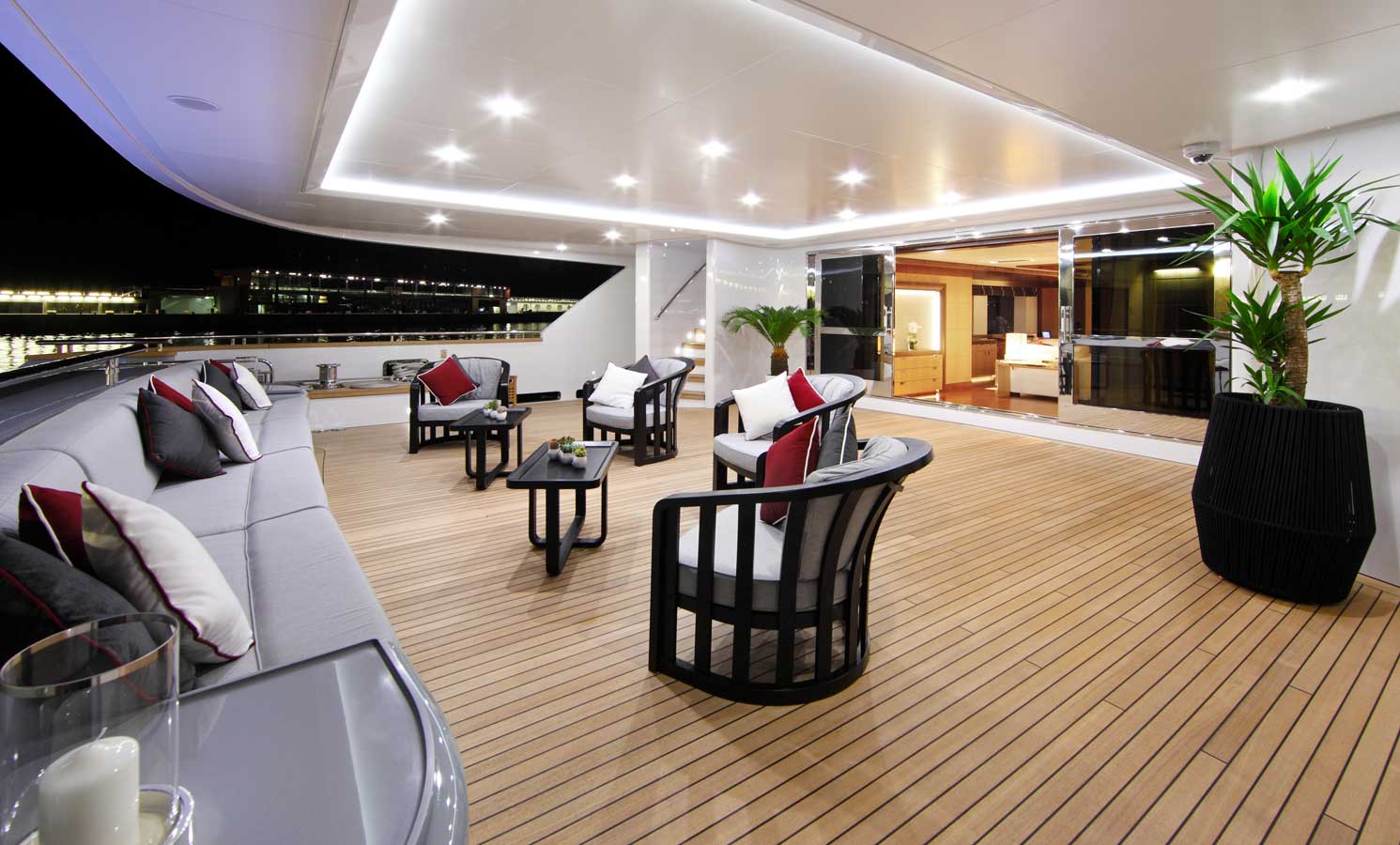 One of several lounge areas aboard the PrimaFor example, Prima was temporarily seized by Italian port authorities in 2012 for dumping fuel and bilge water into the sea — at the exact moment when the Savona Port Authority officials came aboard the yacht.

Prima’s captain was fined, but his willingness to follow orders and remain silent is said to have saved his job.

According to staff, Prima often sails from one location to the next, seemingly at random. The crew suspects it is a diversion to keep the identity of its owners and when and where they use the yacht a secret.

“They would order us to go back and forth across the Mediterranean, with an empty yacht, they were never there. It must have done thousands of miles: go to Greece, go to France, go to Sardinia, to Gibraltar,” one crew member said.

A Hard Yacht to Find 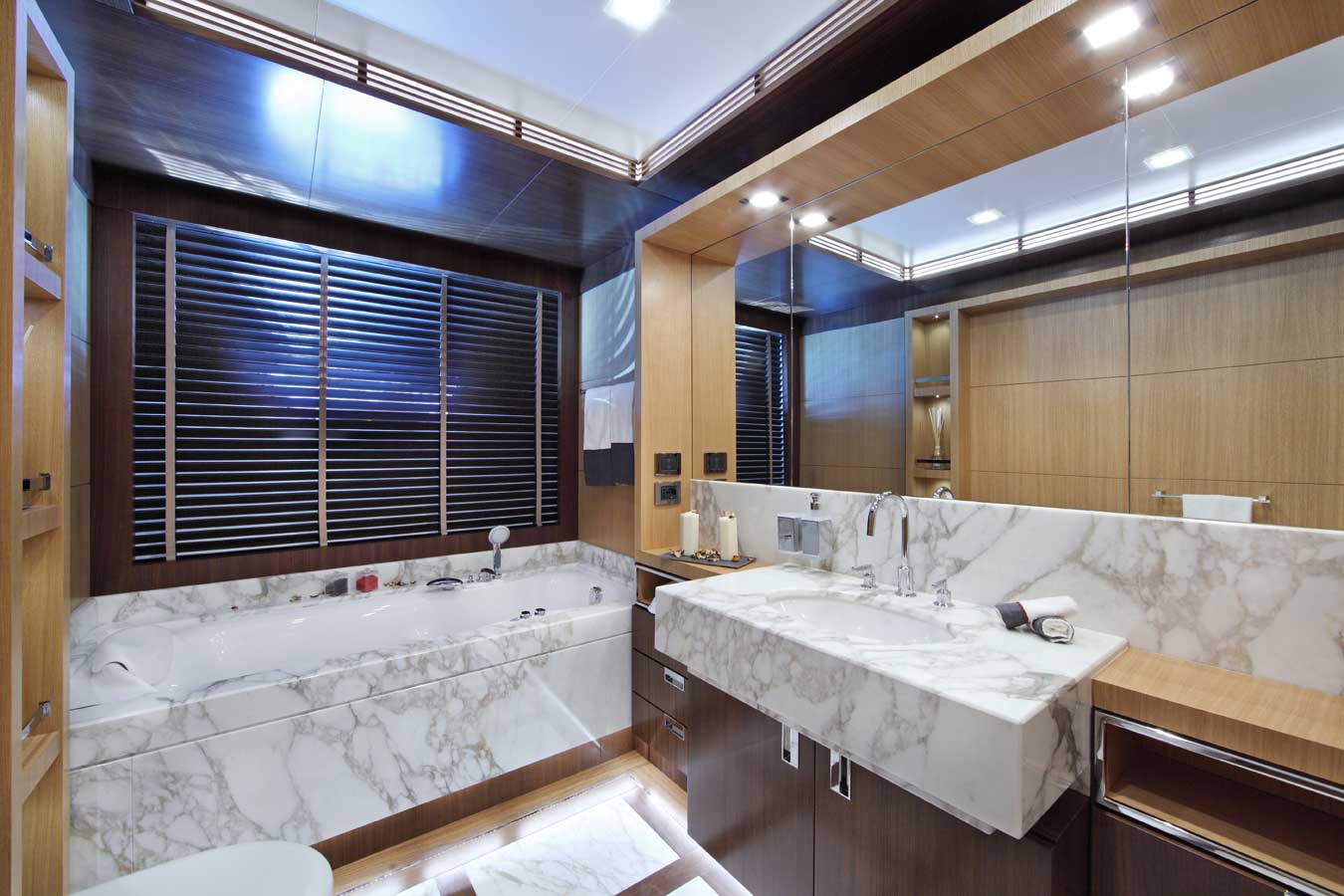 A marble bath aboard an ocean-going vessel? Why not?Currently, Prima sails under the flag of Panama and is registered with the Panamanian Maritime Authority. OCCRP requested a certificate of ownership from the Panamanian consulate in London, which seemed at first to be a simple task.

Initially the consulate seemed keen to provide the document, but days afterwards consulate staff claimed that there was no such vessel in their database.

OCCRP contacted a representative at the US office of the Panama Authority, who was able to find the vessel, and the Maritime office in Panama provided confirmation that the yacht was on its registry. When this was reported to London, the consulate took a different line and announced that the yacht was a “bareboat” charter, meaning it had no permanent crew and therefore no ownership information could be supplied.

According to this representative, the main company currently associated with Prima is the Panamanian-registered Prima Shipping and Marine Services. One of its directors is Rasul Hasanov, who works at the State Maritime Administration of Azerbaijan.

This appears to be no coincidence. One crew member said Hasanov came aboard the Prima. “He was kind of vice-minister for the State Maritime Administration. He was always in uniform.” 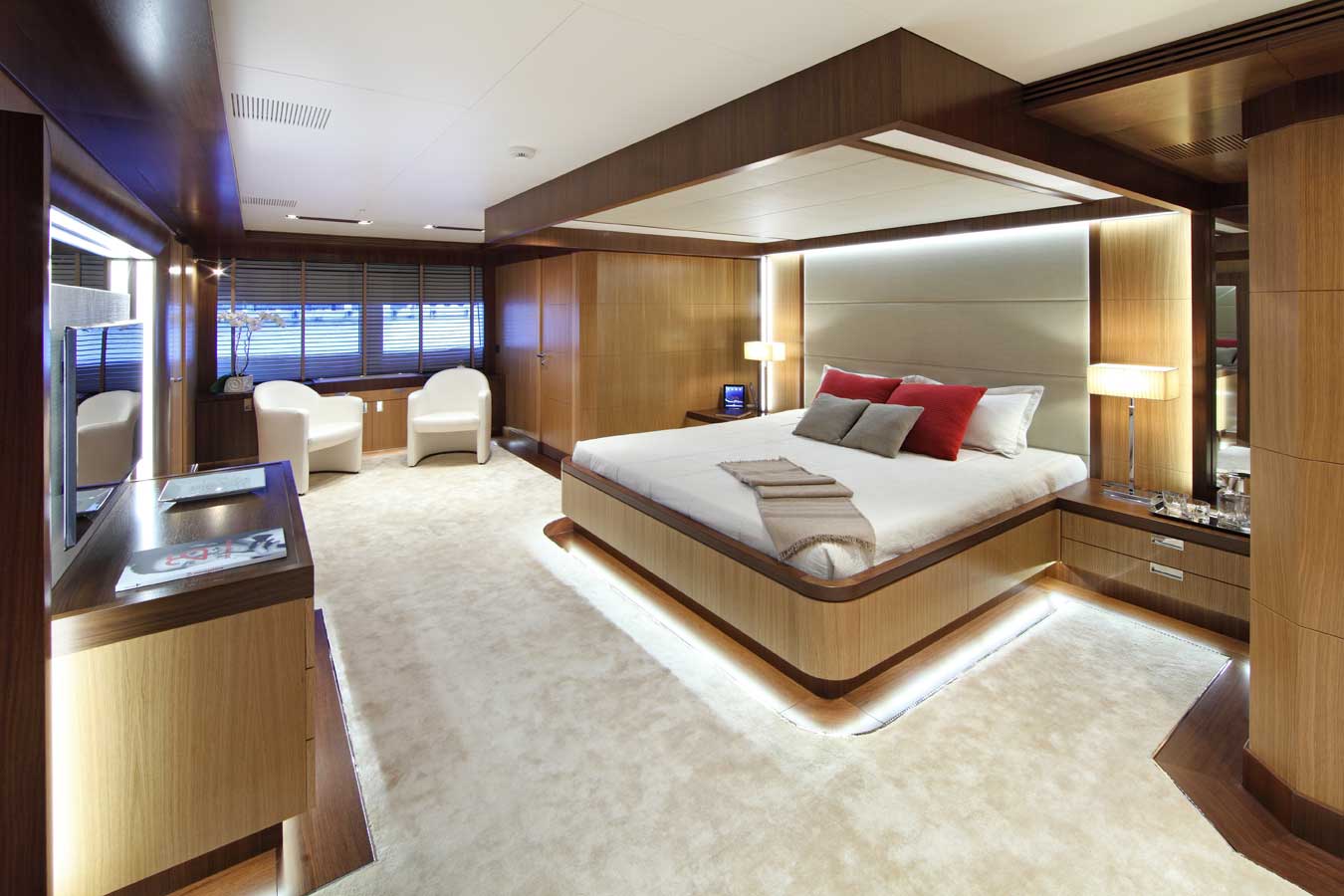 The master suite aboard the PrimaAccording to another crew member who worked aboard Prima recently, the yacht has also been used by Gudrat Gurbanov, head of Azerbaijan’s State Maritime Administration.

This member said he’d only seen President Aliyev once, and that initially the yacht was used by one of the President’s daughters and then by his son, Heydar, who apparently came for dinner: “Once they sent us to Gibraltar from Sardinia for a dinner, and then the son came, a kid about 18 years old.”

Leyla Aliyeva, the president’s eldest daughter, visited Prima more frequently than other members of the family, and would visit with her then-husband, Russian pop singer Emin Agalarov. “The daughter would use [the yacht] a bit more, she came three or four times a year, once with a famous … singer”. 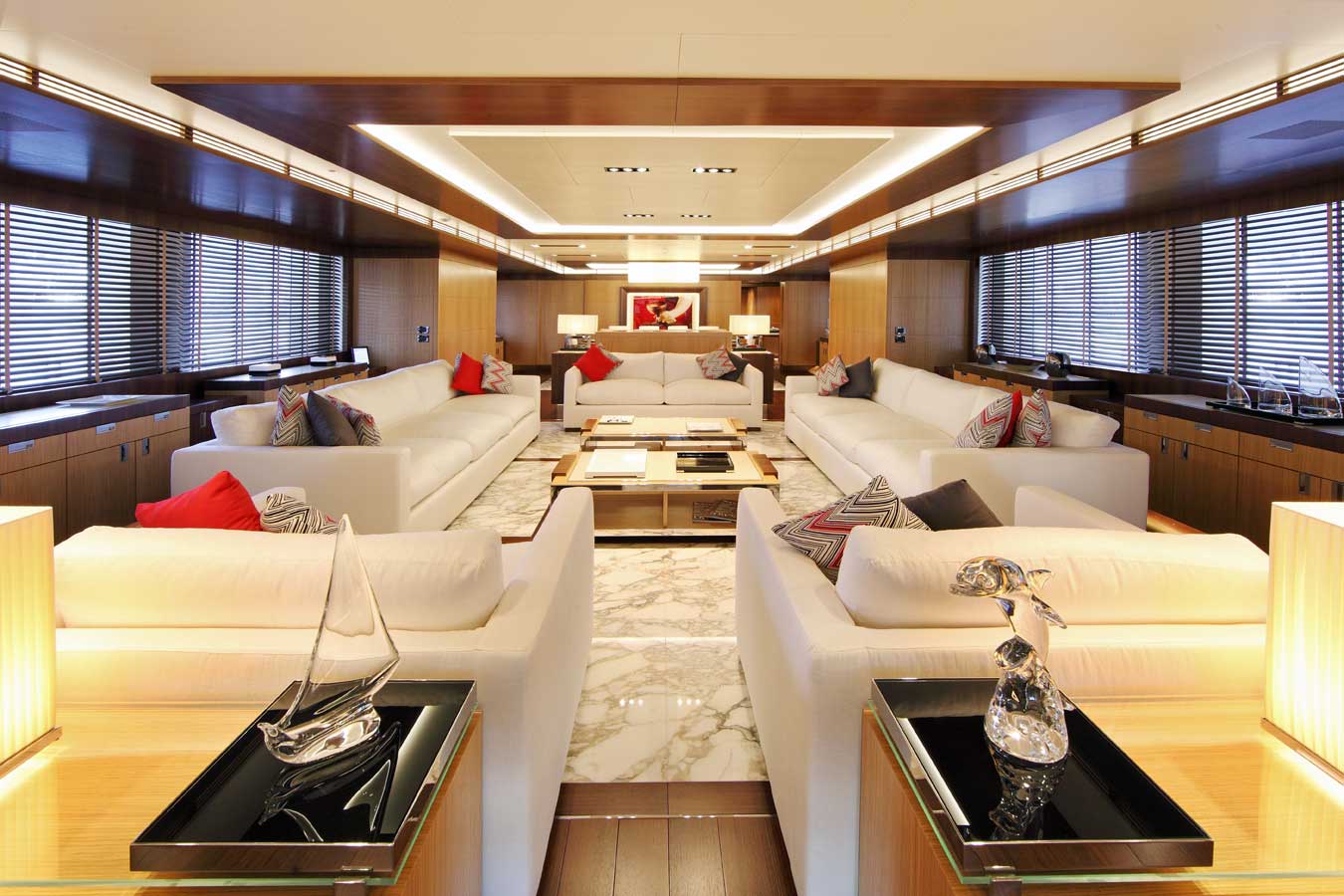 The Prima’s main saloonYet another ex-crew member shed light on why the Aliyevs were seldom seen aboard Prima: on one occasion when Aliyev and his wife, Mehriban, were on board, the First Lady is said to have felt seasick and the presidential staff complained that the yacht was too small.

“During a short trip the wife felt sick and said that the boat was too small. So then her staff started to talk about buying a bigger boat, of 70 or 100 meters,” the crew member said.

Fortunately, the Aliyevs appear to have a number of choices when it comes to luxury yachts. According to a crew member, they have at least two yachts in the Caspian Sea and additional yachts in other locations.

One of the two yachts in the Caspian is the oddly named 44-meter superyacht “Sedation A”. Crafted in 2007 by luxury shipbuilders Heesen Yachts, she would have cost about US$ 27 million at the time. 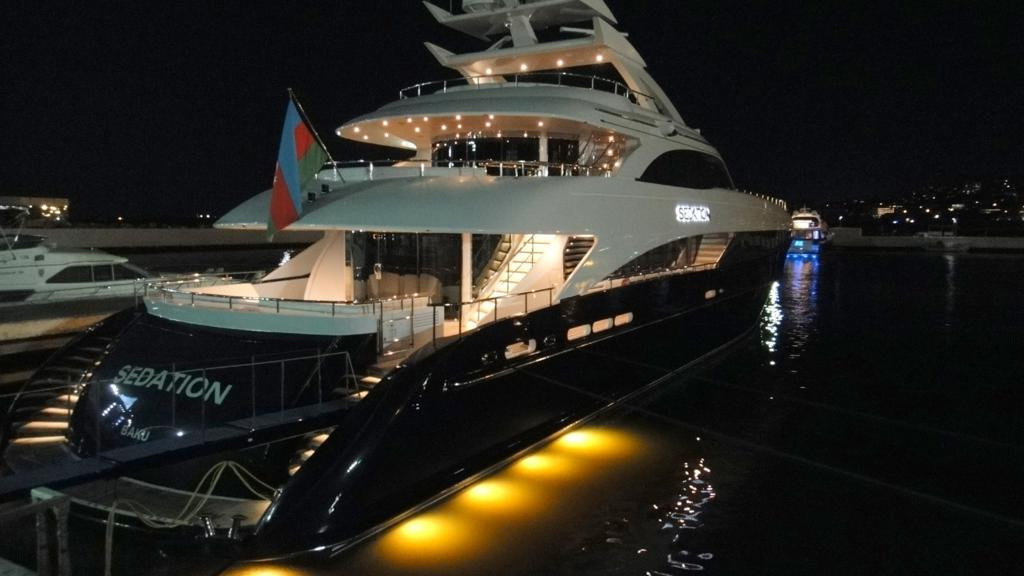 Sedation A, docked at the Baku Yacht ClubThe interior was designed by Omega Architects, who described it as a “unique ethnic design that features crushed bamboo” – apparently a collaboration between Omega and the yacht's owners themselves.

According to its profile on superyachts.com, Sedation A can accommodate 10 guests. It has an owner cabin and a VIP cabin. It is big enough to carry nine crew members, “to ensure a relaxed luxury yacht experience.”

But the yacht’s buyer was no ordinary Azerbaijani; this purchase was also made through SOCAR. The purchase was confirmed in a 2007 annual report published on the SOCAR website. It is also mentioned that SOCAR bought another boat at the same time, the smaller Atlant that is often photographed alongside Sedation A at the Baku Yacht Club.

In the report there is no mention of purchase price, and no explanation of why it was bought. In fact it doesn’t say much, and the text referring to the yachts is only present in the English translation – it does not appear at all in the Azerbaijani-language text.

Presently, Sedation A is said to be owned by Caspian Marine Services, a company closely linked to SOCAR, according to the American Bureau of Shipping database.

However, Sedation A is also registered in Russia.

Corleones of the Caspian

It appears that owning luxury property through state companies is a trait that the Aliyevs share with at least two other heads of state with whom they have friendly relations.

A search for Sedation A in the online Russian Maritime Register does not produce any results, nor does the yacht appear in the list of vessels in the registry sailing under the Azerbaijani flag. 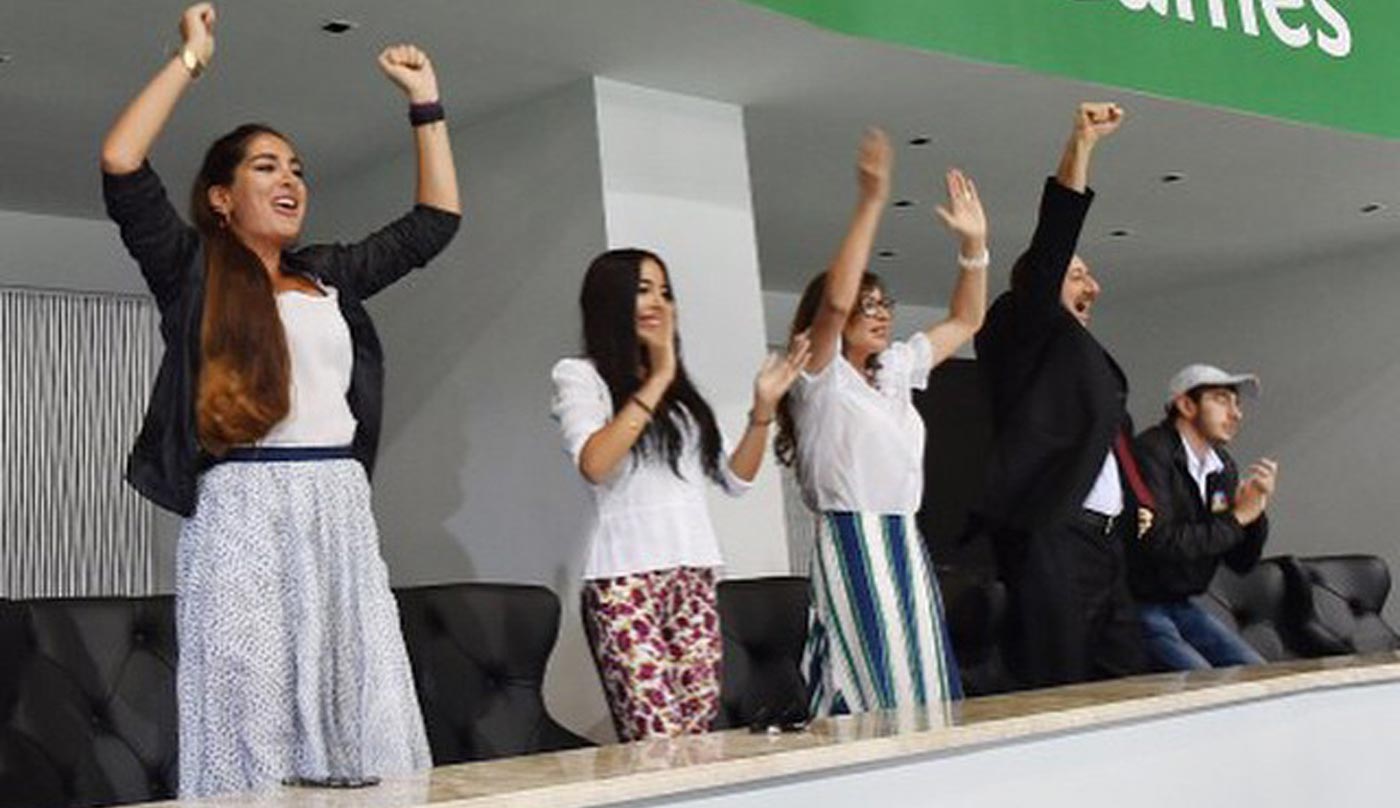 The First Family, cheering at the European GamesBut by scouring a PDF file of the entire Russian shipping registry, it is possible to find Sedation A, with its owner listed as SOCAR. The same registry features another luxury yacht named Wind, officially owned by the Turkmenbashi Oil Processing Complex.

Wind is in fact the new name of Galkynysh, the €60 million yacht (around US$77 million in 2008) which, according to documents published by Wikileaks, is owned by the president of Turkmenistan.

Likewise, the yacht Chayka, reportedly used and controlled by Russian President Vladimir Putin, is listed in the same document, registered under the ownership of the “Production Supply Enterprise of the Administrative Department of President of the Russian Federation.”

Sedation A can often be seen at the Baku Yacht Club, where it is frequently photographed by Baku residents passing by the exclusive club - and sometimes by Azerbaijanis fortunate enough to find themselves inside.

Among the latter group, Sedation A’s connection to Ilham Aliyev is something of an open secret; one local posted a photo of himself right next to Sedation, posting “#Yaxt klub Baku#sedation#Mr#President#yaxt#Ilham#Aliev”.

But another Instagram user added just two words in Russian: “Don Corleone”-- perhaps a reference to the fact the Aliyevs have been referred to as the “Corleones of the Caspian.”

Paid for by the Public

The total value of the two yachts can be pegged at US$ 59 million. The operational cost of the yachts would be around 10 percent of their initial value per year.

What’s more, another 10 percent of their total cost would likely have been spent on accessories, breakdown, berthing and other expenses. The $12 million annual costs for the seldom-used fleet would employ more than 2,380 Azerbaijani workers for one year at the average salary. It also exceeds President Aliyev's official annual salary of US$ 228,000 by more than 50 times.

Why SOCAR needs two luxury yachts and why, at least in the case of Prima, it is not used by the oil company is not clear. Spokesmen for SOCAR and the President did not return phone calls or emails about the story.