Where Yanukovych and his rich hunting buddies hung out 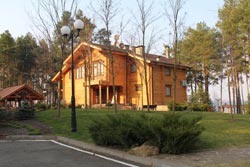 “We’ve survived, though we are outlaws.”

This line from a Russian gangster song became the unofficial anthem of the presidential hunting club whose members were a who’s who of the Ukrainian ruling elite including presidents, billionaires and others during the rule of deposed President Viktor Yanukovych.

The Kedr hunting club occupies nearly 100 hectares (250 acres) of protected forest adjoining Yanukovych’s billion-dollar Mezhyhirya residence. That land has been returned to the state after the former leader fled to Russia, where he is dodging mass murder charges filed by the new Ukrainian government.

The club land is being leased from a limited liability company named Dom Lesnika, which is closely connected to Mezhyhirya and Yanukovych.

Ukraine’s former president is still palpable in every detail here. Ostrov (Island), one of the hunting clubhouses, closely resembles Honka, Yanukovych’s posh mansion at Mezhyhirya, today a symbol of corruption and extravagance.

Kedr’s membership roll is exclusive including only 28 members  but they are the richest and most influential individuals during the Yanukovych era.

Ex-presidents Leonid Kravchuk and Leonid Kuchma, billionaires Viktor Pinchuk and Vadim Novinsky as well as a whole array of ministers, officials, members of parliament and businessmen were among those who joined Kedr’s ranks to go hunting with Yanukovych.

Former secretary of the National Security and Defense Council Andriy Kluyev was the last public official to join Kedr. On Dec. 28, in the midst of EuroMaidan protests, he filed an application form. On Feb.10, just 12 days before Yanukovych fled the country, Kluyev paid Hr 120,000 ($15,000) in membership fees. 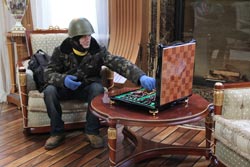 A Maidan self-defense member checks out a chess set at a hunting residence of Kedr, a hunting club set up for the pleasure of Viktor Yanukovych and his cronies.

From the inside, Ostrov looks like a large sailing ship with the masts and interior balconies resembling captain’s decks. A massive wooden table for 18 persons sits in the middle.

“Club members used to dine at this table,” Kedr’s director Mykola Hordiychuk recalls. “They brought their personal chefs with them. We merely cleaned up after them. Even tablecloths were laundered in Mezhyhirya, as they were too large for us to handle.”

Inside the house, there was a small swimming pool with a marble massage table. In one of the rooms, journalists of the Organized Crime and Corruption Reporting Project  found presents members gave each other: expensive bottles of alcohol and empty boxes for hunting knives with handles carved liked the jaws of wolves.

According to the documents found in Mezhyhirya, the clubhouse was leased from Dom Lesnika for nearly $75,000 per month.

The budget was comprised of membership fees, which in 2013 escalated to Hr 600,000 ($75,000), or six-fold the amount that members had to pay in 2008, when the club was established. According to Kedr’s accounting records, dues were often paid in cash.

In addition to such generous cash injections by the members, Ukraine’s state budget also took the group’s hunting needs into consideration. According to a state procurement portal, in 2010-2012 nearly Hr 2 million ($250,000) of taxpayers’ money was spent on a large animals enclosure. Additionally, nearly Hr 7.3 million ($1 million) was spent to build over 20 kilometers of state-of-the-art roads in the forest. 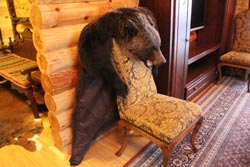 A bear chair is one of many exclusive furniture items created for Kedr, an exclusive hunting society associated with former President Viktor Yanukovych.

Hunting was a passion of Yanukovych. He didn’t begrudge spending money on it – almost every building in use had a weapons locker, a separate wardrobe with equipment and, of course, trophies on the walls. A security group called Rubezh protected the hunters and fishermen from prying eyes.

Yanukovych had his eye on the hunting area since the 2004 presidential election fiasco, when the Orange Revolution prevented him from taking power during a fraudulent election.

It is a place with vivid history. In 1967, it was a favorite area of the Soviet Union’s Communist Party leader Volodymyr Shcherbytsky, who ruled from 1972-1989.

Everything needed for luxury recreation is here – 30,400 hectares of preserved forests, access to the massive Kyiv water reservoir, 800 tree stands, gazebos, wild ducks, hares, foxes, wild boars and deer. In 2006, a part of this territory was leased for free to Dom Lesnika, a company closely related to Yanukovych.

Very quickly Shcherbytsky’s modest hunting lodge was replaced by a new wooden two-storied palace. It has its own name: Akatsia. A stuffed wild boar head greets visitors as they walk inside. A bit further, on a  nightstand is an owl. On the opposite wall is a moose head. The floor in the main hall is covered with the skins of wolves. A bearskin hangs on the chair.

There are several guest rooms on the top floor. “Members of the club hardly ever stayed here. Sometimes they stayed up to 2 or 3 o’clock in the morning – and that’s all,” says Serhiy, a former worker who refused to give his last name out of personal safety concerns.

In 2006, the construction of a second structure called Ostrov began.

A construction worker said that construction started with a banya, or bath house, presented to Yanukovych by Kharkiv billionaire Oleksandr Yaroslavskiy. “It was custom-made in St. Petersburg, then it was transported here and assembled,” the worker said.

They picked a perfect place for the bathhouse, between the water reservoir and an artificial bay for boats. There is a helipad and a shooting range nearby. The bath house is big enough to fit two bedrooms with dressing rooms, showers, massage rooms, a kitchen and a karaoke room. Over the sound system in the hall stands a large framed photo of a singing Yanukovych, billionaire Rinat Akhmetov and iconic Russian singer Iosif Kobzon.

Both Ostrov and Akatsia were finished by autumn 2008. At that time, President Viktor Yushchenko, who by then had lost the people’s trust, was still in power. Meanwhile, Yanukovych was the main opposition leader gearing up for a clash with the former Prime Minister Yulia Tymoshenko over the president’s seat.. In October the public organization Association of Hunters and Fishermen “Kedr” was founded at Yanukovych’s actual residence address: NoviPetrivtsi village, 19 Ivana Franka Street.

In its charter, the fishermen and hunters of the club wrote that the purpose of their activity is “to satisfy and protect the social, economic, sport and other common interests of its members.”

Viktor Pinchuk, a billionaire and club member, said that “banal as it may sound, the purpose of my participation in the hunting club was to hunt.”

Pinchuk says it’s his long-time hobby, and when he received an invitation to join this club, Yanukovych was leader of the opposition.

Despite the fact that Yanukovych’s firm was a leaseholder of the hunting area for the club, he does not show up as a founder or even a formal member. According to the director of Kedr, Mykola Hordiychuk, Yanukovych was invited to hunt by the club members, not vice versa.

But Pinchuk said it worked another way. “When the situation changed (Yanukovych got elected), a new rule kicked in that turning down the president’s invitation was not to be done,” he says.

According to its papers, Kedr’s first official decision was to appoint Ivan Tokhtamysh as head of the organization. Even after leaving this post a few years later, Tokhtamysh continued to be the main organizer of the “royal” hunt. According to the club’s register, he visited the residence almost every week. The last visit took place on Feb. 9. Kedr had a total of 94 employees. After Yanukovych’s escape, Tokhtamysh disappeared and has not been seen since at the club.

The hunters came mostly on weekends and usually without prior warning.

“It was also related to security. You never know what is on someone’s mind,” says Hordiychuk. “When there was a group hunt, opening or closing of the season, everyone tried to join.”

Konstantin Kobzar, Yanukovych’s chief bodyguard, was responsible for the president’s safety and took tough security measures. All technical employees were isolated from the members and guests of the club. “Their personal security was first to arrive. In the whole area, the staff was hidden,” Hordiychuk recalls.

Club members came mainly with their own weapons, occasionally using the arsenal from Kedr. On the hunting grounds, there even was a full-time gunsmith. Yanukovych owned a large collection of arms. He left many gun boxes behind as he ran from his residence.

“We rarely had time to be there because President Yanukovych didn’t have time. The hunting stopped when events on the Maidan began. And since the opening of the hunting season in the fall, the club didn’t get together,” said Boyko, the former deputy prime minister and presidential candidate.

But, according to guest books obtained by journalists, some club members celebrated the New Year on the hunting grounds, and staff were called in to serve them through the night. On Christmas Day, celebrated in Ukraine on Jan. 7, a Vertep, or puppet theater, was invited to the hunting lodge. The last celebrations in the restaurant took place between Feb. 6-8, just days after the first EuroMaidan protesters were killed, but before the massacre on Feb. 20.

According to the records, Yanukovych’s cronies enjoyed firework displays on each of those days, set up by the Trade House Lomakin company, as well as flowers and musicians.

This investigative project was conducted by the Washington-based Organized Crime and Corruption Reporting Project, a Kyiv Post partner.