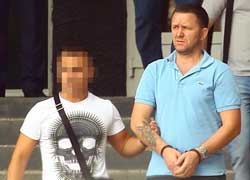 Organized crime boss Ion Anton Druta, known as “Vanea” or “Pisateli The Writer” was arrested July 12 in Chisinau by the National Inspector of Investigations of the Republic of Moldova.

According to state Police Chief Ion Bodrug, police had monitored Druta for a long time and arrested him the moment he tried to flee. This was immediately after the Chisinau Appeals Court announced that he had been sentenced to 20 years in prison for orchestrating a triple homicide by subordinates in 2000.

Dorin Recean, the minister of Internal Affairs, said the officers who arrested the organized crime figure will be decorated, but not publicly named.

“Ion Druta is an authority in the organized crime world. His detention is a success for the police,” said Ion Bodrug, the Moldovan Chief of Police, at a press conference.

Interpol was also searching for “The Writer” at the request of Romanian authorities. Druta is accused of hiring Vitalie Proca, a paid assassin to murder another organized crime figure, Puiu Mironescu, in Bucharest.  He allegedly was acting under orders from the Mararu organized crime clan. Druta is suspected of bringing Proca into Romania and providing him with information needed for the attack. According to prosecutors from Bucharest, Druta provided the Kalashnikov and Makarov pistol Proca used. On Nov. 26, 2012, on a street in the Bucharest neighborhood of Vitan, Proca shot the wrong man, confusing the victim with Mironescu, the intended target.

Proca is in custody in Moscow where Russian officials announced he will be extradited to Romania. Scotland Yard is also investigating him for an attempted murder in London in March 2012. In that case, the victim was the Russian banker, Gherman Gorbuntsov.

OCCRP wrote about Proca, Drutu and other Moldovan members involved in the murder-for hire networks operating in Romania and Moldova in its Murderers Trail Series with the Guardian.