Twitter
If it wasn’t bad enough that the worldwide monetary melee has revealed malfeasance like giant Ponzi schemes, creative accounting that hid massive risks and companies lavishing bonuses on their leaders after receiving government bailouts, another scandal is now gaining prominence: Mob money has been propping up banks, according to the UN drug czar. 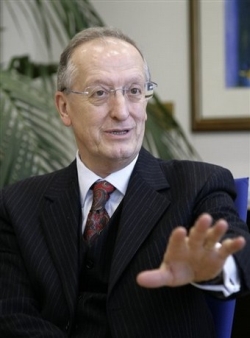 Antonio Maria Costa
“Stupid and diabolic” bank behavior since the world financial system crumbled in September, wrote UN Office of Drugs and Crime head Antonio Maria Costa, has allowed the transnational mafia’s drug money to enter the financial system. “With the financial crisis, banks became desperate for cash, and one of the few sources of liquidity these days is the transnational mafia,” he said in an e-mail.

Costa and others have recently warned that the financial crisis is benefiting organized crime. Due diligence in banking, they say, seems to have gone out the window. Meanwhile, a rocky economy means police budgets are being slashed in the US and elsewhere, paving the way for more crime to flourish. And in one country known for its enormous organized crime presence, banks’ reluctance to lend has led to the return of mafia loan sharking. At the same time, Costa said, the crisis offers an opportunity to crack down on money laundering. And a few mob groups are watching their incomes dwindle.

It is now far easier for criminals to launder money than it was before the crisis, Costa said.
“Bankers have done something both stupid and diabolic,” he said. “They have allowed the world’s criminal economy to become part of the global economy. Investment bankers, fund managers, commodity traders and realtors have assisted syndicates to launder the proceeds from crime and become legitimate partners to business. Banks have developed complex financial instruments that have made financial markets deliberately less transparent and more accessible to wrong-doing. Thanks to them, criminal groups have become multinational corporations through money laundering: a sort of mafia borghese, or white collar syndicate.” 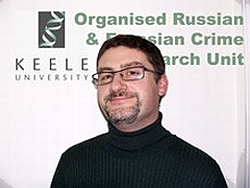 Mark Galeotti
Drug money – which the UN estimates is a $320 billion per year global business – makes up most of the ill-gotten funds finding their way into the banking system, Costa said. But other illegal revenue includes profits from smuggling people, guns, cigarettes and natural resources.

While Costa would not be specific about which banks were involved, or even which countries were to blame (“The problem is everywhere,” he said), a professor at the NYU School of Continuing and Professional Studies says the problem is real.

“All criminal money flows have become easier,” said Mark Galeotti, a Russia expert who edited Organized Crime in History (Routledge, 2008). “If someone comes up with a suitcase of one million dollars to a bank in London, they’ll still look askance. But if that money has been lightly laundered, it’s like the game of ‘pass the parcel’ – you don’t want to be caught holding the parcel when the music stops, but while the music still plays, you’ve got good chance of getting away with it.” 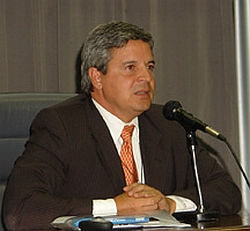 Antonio Gustavo Rodrigues
International banking’s failure on due diligence was also slammed earlier this month by human rights campaigners Global Witness, who charged that Barclays, HSBC, Citigroup and others had helped corrupt dictators and their families loot oil, gas and timber revenues from state coffers. Current laws, according to Global Witness, are ambiguous about how far banks must go to identify the real person behind a series of front companies and trusts.

One group that came under fire in the report for not doing enough – the 34-country Financial Action Task Force (FATF), which sets the standards for anti-money laundering rules – has acknowledged that they need to help protect the financial system from criminals. The FATF agreed last month to a Dutch proposal to study how the financial crisis is affecting the fight against money laundering. “The current economic crisis should not blind us to the continued need to protect our financial systems from misuse by criminals or terrorists,” FATF president Antonio Gustavo Rodrigues warned a Council of Europe committee in December. “Consistent application of recognized international standards is thus essential to facing up to criminal and terrorist misuse of the financial system.”

But who will enforce the already existing laws if police budgets are slashed? Police budgets are as susceptible to the world’s financial vagaries as business and industry. But when an insurance company cuts jobs, it doesn’t affect public safety; police belt-tightening, on the other hand, can benefit crime and organized crime. In the UK, police faced tight budgets even before the crisis. Two years ago, Britain’s 43 police forces faced a forecast one-billion-pound ($1.4 billion) shortfall. Things have only worsened since then, particularly since one police force – the South Wales Police – had invested seven million pounds in Icelandic banks.

In the US, nearly two out of three police agencies answering a survey by a police research group in January said they were making plans to cut their budgets.

“Police departments usually are among the last agencies to be cut when the economy turns bad, because elected officials see public safety as a top priority and try to find other places to cut,” said the president of the Washington, D.C.-based Police Executive Research Forum John Timoney at the time the survey results were released. “The fact that most police departments currently are being asked to make cuts is an indication of how badly this recession is affecting local tax bases.”

Assistance to the Mob Apparatus 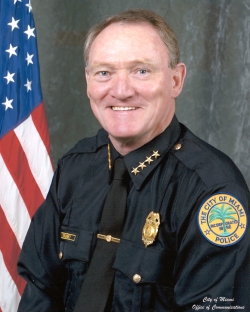 John Timoney
The upshot is not just a simple case of criminals dealing without police watching. In one country, when banks are not lending, mafia groups step in as a high-interest and violent version of the banks. Italian banks – stingy with small business loans even in the best of times – have nearly stopped lending. And Italy’s four mob groups – Sicily’s La Cosa Nostra, Naples’s Camorra, the Calabrian region’s ‘Ndrangheta, and the Puglia region’s Sacra Corona Unita – are reportedly enjoying various aspects of the windfall. Italy’s intelligence service told parliament earlier this month that the growing number of unemployed could provide mafia groups with new recruits, and that cash-strapped businesses had become more vulnerable to loan sharks and proftection rackets. “Unemployment and the restriction of credit have been, and may continue to represent, conditions favorable to exploitation by the criminal system,” the report said.

But the financial crisis, with its accompanying hostile climate towards banking secrecy, also provides an opportunity, said UNODC head Costa. 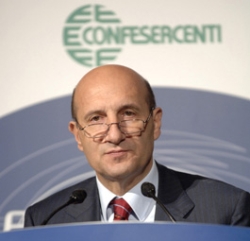 Marco Venturi
“Now is the time to take advantage of calls for greater regulation in the financial system, insist on the know-your-customer principle, and strengthen anti-money laundering measures – especially for transactions in the real economy,” he said, adding that while he was proud of what the FATF had done since its founding in 1991, there was a lot more to be done. “Just look at the ample evidence on both sides of the Atlantic, or the Mediterranean, the Persian Gulf or the China Seas and do a bit of digging into its origins.”

Others have noted that the crisis isn’t a boon to all organized crime groups worldwide. Japan’s yakuza mob groups are seeing revenue dwindle from their usual activities – gambling, prostitution and loan-sharking. And in Russia, the crisis is actually slamming legitimate doors shut for some criminal groups, which could mean a renewal of the turf wars of the 1990s, said Russia expert Mark Galeotti.

“White-collar Mafiosi might be involved at a strategic level in drug dealing or human trafficking, but they’ve got a portfolio of interests, a lot of which are legitimate. They don’t really care what they do, as long as it makes money and brings power,” he said. “What’s happened because of the crunch, these white-collar types who’re used to prosperity, are finding that their income streams are drying up.”

Falling income is somewhere Russian mobsters have been before, with the 1998 collapse of the ruble. But this time, Galeotti said, there’s lucrative regional drug production to be fought over – Afghan heroin, southern Russia’s marijuana or synthetic drugs from St. Petersburg.

“We’re just on the cusp of a kind of sharpening of the tensions in the underworld,” he said. “These more house-trained criminals are now coming to pressure and are now having to resort to their bandit past. There’s a huge bonanza of narcotics – gangs trying to make ends meet are increasingly turning to the drug trade. We might see a renewal of turf wars. And we’ll see an upsurge in contract killing.”