Lebanon’s authorities are employing defamation laws to silence journalists, activists, and other critics of their policies and corruption, as the country’s anti-government protests entered the fifth week, Human Rights Watch (HRW) reported Friday. 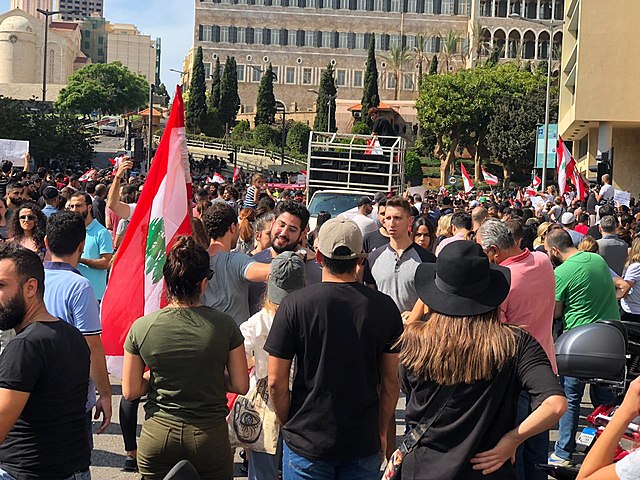 While protests in Lebanon entered the fifth week, demanding stronger fight against corruption in the country, authorities work on stronger defamation laws. (Photo: Shahen books (CC BY-SA 4.0))The report finds that “Powerful political and religious figures have increasingly used the country’s criminal insult and defamation laws against people leveling accusations of corruption and reporting on the country’s worsening economic and political situation.”

The HRW warned that convictions under such laws could lead to prison terms of up to three years, and called on Lebanon's Parliament to “urgently repeal the laws that criminalize speech, some of which date from Ottoman (1516 - 1918) and French Mandate (1923 - 46) periods.”

Deputy Middle East HRW director, Joe Stork, also warned that criminal defamation laws could be weapons in the hands of those who want to “silence criticism and debate about pressing social and human rights issues.”

“At this critical juncture, Lebanese officials should safeguard, not stifle, free expression,” he said, referring to massive protests across the country to demonstrate anger over endemic corruption.

The protests, which entered the fifth week, have been considered the largest in the country since the 2015 “Cedar Revolution," which broke out after President Rafik Hariri was assassinated.

After 2015, the organization reported, the country witnessed an “alarming increase in attacks on peaceful speech and expression.”

The Cybercrimes Bureau – an Internal Security Forces unit that fights cybercrime and enhances online security – reportedly initiated 3,599 defamation investigations between January 2015 and May 2019, with the number increasing in the last few years.

During that period, as HRW noted, Lebanese criminal courts sentenced at least three people to prison for defamation, including a “person given nine sentences ranging from two months to six months in separate criminal cases filed against him by the same politician.”

The report also found that the prosecution and security agencies improperly, and sometimes illegally, intimidated and tried to silence people charged in these cases.

Although Lebanon’s constitution guarantees freedom of expression “within the limits established by law,” the penal code criminalizes defamation against public officials and authorizes imprisonment.

President Michel Aoun, as Al Jazeera reported, said in a TV interview Tuesday that if those demonstrating “see no decent people in this state, let them emigrate. They won't get into power.”

Aoun’s words provoked another wave of public protests at the Presidential Palace on Friday, but the military and police, according to the report, used barbed wire and three-man-deep lines of riot police in full body armor to stop them a few hundred meters from the palace.

Parliament is debating a new media law that would amend the existing defamation provisions for published content and should prohibit pretrial detention for all publishing crimes, so the HRW called on Lebanese lawmakers to ensure that the new media law meets international human rights standards, including by banning imprisonment for all speech crimes.

“As Lebanon begins the painstaking process of addressing its economic crisis and holding those responsible for major human rights abuses to account, its laws need to protect people who expose corruption and misconduct,” the HRW’s Joe Stark said.

Until that happens, as he added, “parliament should urgently decriminalize defamation.”