Thousands rallied against the Albanian government on Thursday, claiming it is corrupt and linked to organized crime, as opposition lawmakers resigned from parliament, demanding an early election. 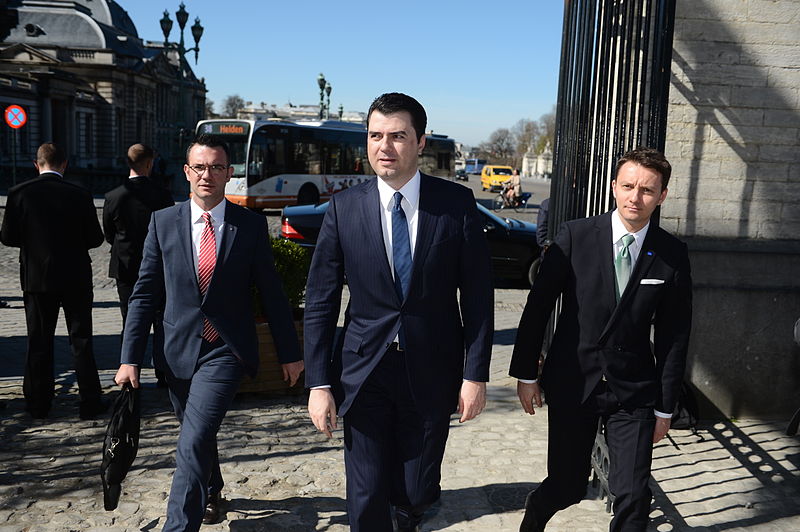 Lulzim Basha, mayor of Tirana and head of the Democratic Party of Albania (Photo: European People's Party, CC BY 2.0)“We launched today a journey of hope that will not stop until the European destiny of this country becomes a reality, until we remove the crown prince and his criminal government,” the lawmakers, led by the center-right Democratic Party stated, referring to Prime Minister Edi Rama.

The opposition party’s website details how Rama and his ruling Socialist Party manipulated the results of the 2017 elections, with the help of organized crime gangs. It also detailed how Elisa Spiropali, a ruling party MP and spokesperson, awarded contracts worth 550 million lek (US$5 million) to family members through tenders which did not attract attention and then covered up the clear conflict of interest.

Democratic Party leader Lulzim Basha announced the lawmakers’ resignations in front of protesters who gathered in the capital of Tirana to demand the government step down.

After his speech encouraging a continuation and spread of the massive rallies, which have now been held six times, supporters of the opposition followed Basha to the offices of the Parliament Building, according to the Associated Press where he handed over the resignation letters of opposition party members.

Balkan Insight reported that police deployed about 1,000 officers, equipped with gas masks and some in full anti-riot gear but that no violence erupted.

A US Embassy statement described previous protests as violent and resulting in multiple injuries to demonstrators and police. Police were reported to have used tear gas during clashes with protesters on Saturday, while crowds were alleged to have attacked Rama’s office.

Gramoz Ruci, president of the Assembly of Albania, on Wednesday called the resignation of the opposition party undemocratic. “Power is not taken at the table, and the sovereign is not a crowd, no matter how many citizens come to a protest, but the entirety of the citizenry who judge us by vote and mandate us by vote,” his statement said.

The US Embassy criticized on Tuesday the opposition as undermining “the basic principles of democracy and subvert(ing) the important progress Albania has achieved on rule of law and responsible governance.”

It called on Albanian MPs to “rise above the political fray, reject calls to abandon their mandates, and defend the ideals and principles central to any vibrant democracy.”

The next Albanian presidential election is scheduled for 2022.