Thieves Can’t Sell Gold Lunchbox, So They Dine Like Princes

Police in Hyderabad, India, arrested two men Tuesday for the theft of a 4-kilogram diamond-studded gold lunchbox, saying that the men had been eating their meals out of it after failing to fence it. 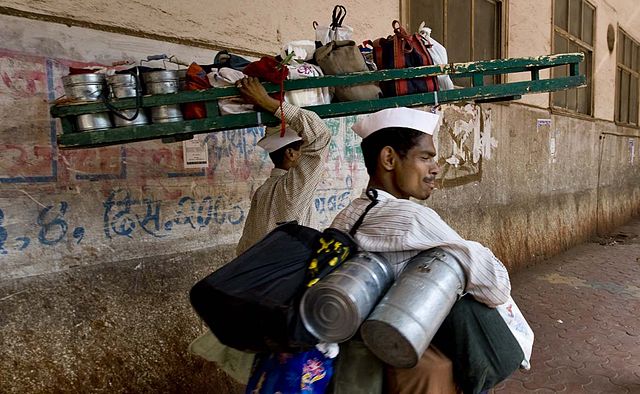 A man carries lunch deliveries in tiffin carriers in Mumbai (CC 2.0)“We are told that this particular thief had been using the tiffin box to have his meals ever since he looted it from the museum,” reported Uma Sudhir for Hyderabad’s NDTV. Tiffin boxes, also called dabbas, are round metal dishes with lids, which are stacked into a column and clamped together for easy transport of multi-course meals.

The stolen box, an ornate gold tiffin carrier adorned with diamonds, belonged to the last king of Hyderabad, Mir Osman Ali Khan, who was named the richest man in the world in 1937 and ruled Hyderabad until its annexation by India in 1948.

The dabba was filched early last week from its display case in his former palace, along with a ruby-studded gold teacup, saucer, and teaspoon, reported Hyderabad news outlets. The total value of the goods is estimated at $7 million.

Police told local reporters that the thieves climbed into the palace (now a museum) through a ventilator, twisted away CCTV cameras, and unscrewed the glass fronts of display cases before taking the items.

After bagging the lunchbox and teacup, the men then hightailed it to Mumbai with plans to fence the valuables, said police. There, they lived a “fancy life” in a five-star Mumbai hotel--and ate from the lunchbox.

Dabbas are particularly popular in Mumbai, which boasts of a famous system of daily dabba deliveries that brings hot, home-cooked food to workers citywide. Across India, it’s estimated that 200,000 such deliveries occur daily.

After failing to find anyone in Mumbai to buy the lunchbox or the tea set, the men returned to Hyderabad, where they were nabbed during a massive manhunt, reports the BBC.

The recovered tea set and lunchbox will be returned to the museum.