A Belgrade court has sentenced one of the richest businessmen in the Balkans, Miroslav Miskovic, to a five-year prison sentence for helping his son evade almost US$ 3 million in taxes. 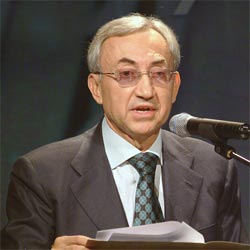 Miroslav MiskovicHe was also fined 8 million Serbian Dinars (RSD) (US$ 73,000) – the same amount his son was fined in March.

Miskovic is the owner of Delta Holding, one of the biggest regional companies dealing with real estate, insurance, agriculture and retail.

He was arrested in December 2012 along with 10 others, and in May 2013, the group was indicted on charges of abuse of power and tax evasion. Miskovic's son Marko was also one of those arrested. Prosecutors accused the group of pocketing more than $39 million during Serbia’s privatization of highway companies in 2005.

The elder Miskovic was placed in pre-trial detention following the arrest and his passport was confiscated.

The arrest was considered one of the biggest achievements of the current Serbian government, headed by Aleksandar Vucic. The government and pro-government media have boasted about Vucic's success in fighting organized crime.

Miskovic's bail was set in July 2013 at € 12 million (US$ 13.6 million) – the highest bail ever set in Serbia. His trial began in November 2013. In December that year, the judge presiding in the case freed him from detention and returned his passport. Miskovic paid the bail, left the country for a business meeting, and later returned to Serbia.

In February 2015, Miskovic's trial restarted, as it was combined with another trial against an alleged associate who was sentenced in another case. The judge who decided to return Miskovic's passport, Vladimir Vucinic, was swapped with judge Maja Ilic.

By late 2015, Miskovic's case would be separated again due to his deteriorating health at the time.

According to the Serbian Center for Investigative Journalism (CINS), in March this year, seven of the 10 people arrested together with Miskovic were found not guilty, while 3 others received sentences. Among those 3 was Miskovic's son Marko, who was jailed for 3.5 years and ordered to pay a fine of eight million Serbian Dinars (RSD) (US$ 73,000) for tax evasion.

Miskovic was sentenced for helping Marko evade 320 million RSD (US$ 2.9 million), but was not sentenced for abuse of power in the case regarding siphoning off funds from road maintenance companies.

Serbian Organized crime and Corruption Reporting Network (KRIK) reports that judge Maja Ilic said Miroslav Miskovic was the brain behind all key decisions in the companies owned by his son. She reportedly said that Miskovic received a higher sentence in the case than his son because he was the one who thought up the tax evasion scheme, but that prosecutors have not been able to provide enough evidence to sentence him for abuse of power.

In fact, according to the KRIK, the court found Marko Miskovic was trying to reduce his stake in the businesses of the controversial companies, saying he was more interested in music, film and sport, while his father was making all of the important decisions.

Miroslav Miskovic did not attend his sentencing on Monday. According to his lawyer Zdenko Tomanovic, he refused to show up. According to KRIK, Tomanovic said the sentence is “not the result of evidence, but of a lack of courage on the part of the judiciary to oppose announcements by our (Serbian) political elite,” which had been heavily boasting that Miskovic would be sentenced for years.

The website of Delta Holding published a statement the same day, saying the court had refused to hear all witnesses and present evidence proposed by Miskovic's defense, ultimately sentencing Miskovic “without evidence.”

The announcement states Miskovic's defense will lodge an appeal against the first-instance ruling to defend his rights, which include “the return of his travel document and enabling him to do business abroad; the release of frozen assets worth more than € 40 million (US$ 45 million); the return of bail money in the amount of € 12 million (US$ 13.6 million); and finally, passing the second instance and final judgment that will confirm the falsity of the first instance charges.”

Miroslav Miskovic began building up his business empire under the rule of Slobodan Milosevic in the early nineties, and was well known for maintaining strong political ties to any government in power in Serbia for decades since then.

Forbes magazine named Miskovic the richest Serb in 2007, estimating his fortune at about € 1 billion (US$ 1.13 billion).