Guatemala’s prosecutors allege former President Otto Perez Molina and ex-Vice President Roxana Baldetti are linked to another corruption scheme, this time over a contract for operation of a container terminal off Guatemala’s Pacific coast, BBC said. 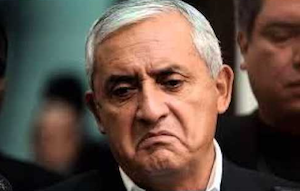 Otto Perez Molina (Photo Credit: Youtube)After resigning last year in the wake of street protests, Perez Molina was jailed to await trial for his alleged involvement in a separate custom fraud case. The case shook the nation with a history of political impunity, the New York Times said.

Baldetti is also in jail awaiting trial in connection with the scheme, which allowed companies to import goods tax-free, news outlet The Local.es wrote.

Investigators said the duo appointed collaborators to top jobs in a state company which then negotiated with TCB. TCB had to pay at least US$ 25 million in bribes to secure the contract, Insight Crime reported. Perez Molina and Baldetti allegedly each received an estimated US$ 4.2 million of the bribe money.

The TCB offered to pay part of the bribe in company stock, Insight Crime reported from investigators, but Perez Molina and Baldetti allegedly insisted on cash payments to be made before the end of Molina’s term in October 2015. Perez Molina allegedly started the approval process immediately after taking office in November 2011, BBC wrote. The project had no competing bids.

Guatemala’s Attorney General’s Office (known as the Public Ministry) said Perez Molina used his office to obtain a direct economic benefit to the detriment to the interests of the nation.

Both Perez Molina and Baldetti are accused of conspiracy, passive bribery, money laundering and fraud in the case, which also saw several others arrested, Deutsche Welle (DW) reported. The former leaders deny any charges and are scheduled to appear in court today, DW said.