On Sunday, Ukrainian Prime Minister Arseniy Yatsenyuk said he is quitting amid allegations his government is corrupt, reported BuzzFeed. 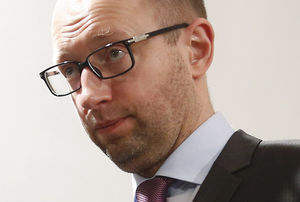 Arseniy Yatsenyuk (Photo: Wikimedia)Yatsenyuk said there were several issues leading to his decision, according to his resignation speech published on the Ukrainian government’s official website. He claimed the political crisis was “created artificially” and described the situation as absurd.

He said accusations against him are groundless and he plans to formally submit his resignation to Parliament on Tuesday.

Nearly two years since he rose to power after the fall of former President Viktor Yanukovych in February 2014, Yatsenyuk barely survived a no-confidence vote this past February, reported the Kyiv Post. The country has been in a state of political crisis since. His popularity sank as his government imposed austerity measures amid numerous allegations of corruption.

His resignation comes just a week after the Panama Papers revealed President Petro Poroshenko may have broken Ukrainian law, allegedly establishing a new company while in office and failing to report its existence in asset disclosure statements. Poroshenko defended his commitment to transparency last week, said the Mirror, as lawmakers called for an investigation into the Panama Papers’ allegations.

Yatsenyuk said he did not want the executive branch destabilized during a war, referring to the conflict with Russian-backed separatists in eastern Ukraine. He also said the majority coalition in the Ukrainian Parliament is being renewed through a fresh agreement.

“The Parliamentary [sic] faction of the block of [President] Petro Poroshenko has nominated Volodymyr Groysman to the post of Prime Minister,” Yatsenyuk said.

Groysman is currently Chairman of the Verkhovna Rada, the parliamentary speaker, according to Ukraine’s parliamentary website. He is described as an ally of Poroshenko, said Bloomberg.

Yatsenyuk and Poroshenko’s parliamentary factions are planning to create a new coalition, the Kyiv Post said. They need 226 votes in Parliament, the minimum required for the creation of a governing coalition. Bloomberg said Groysman expects approval of the coalition this week.