In a heist that would have put Caesar’s sack of Gaul to shame, nearly 500 golden coins produced by an ancient Celtic culture in what is now southern Germany were boosted from the Celtic and Roman Museum in the Bavarian town of Manching, Germany this week. 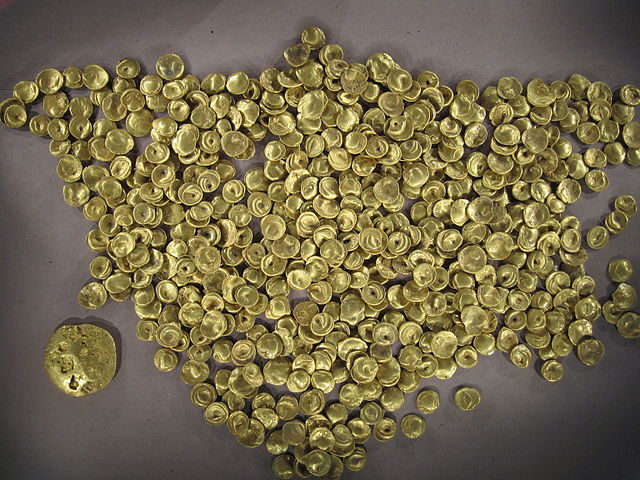 The coins were discovered only as recently as 1999, and the entire museum was set up to showcase them as one of the most significant historical finds in the area. (Photo: Mößbauer, Wikimedia, License)The thieves were in and out in under nine minutes, as they emptied the museum of its flagship exhibit, authorities said.

“It’s clear that you don’t simply march into a museum and take this treasure with you,” Bavaria’s minister of science and arts, Markus Blume, told German public broadcaster BR according to the AP. “It’s highly secured and as such there’s a suspicion that we’re rather dealing with a case of organized crime.”

Weighing some 4.4 kilograms in total, the coins if melted down would be worth nearly $250,000. Their historical significance  pushes their value  much higher, potentially into the millions.

The illegal antiquities trade is a multi-billion dollar global industry, according to a 2018 report by Standard Charter Bank, and its beneficiaries are not just wealthy art aficionados. The illicit trade is also a major funding source for criminal and militant groups.

“You cannot look at it separately from combating trafficking in drugs and weapons. We know that the same groups are engaged, because it generates big money,” said Catherine de Bolle, Executive Director of Europol after a major crackdown on the illegal antiquities trade in May 2020.

The coins were discovered in 1999, and the entire museum was set up to showcase them as one of the most significant historical finds in the area.