Closing seven days of hearings at an appeal court on Tuesday, a top Geneva prosecutor accused convicted mining magnate Beny Steinmetz of being a “coward” for roping friends and colleagues into a cover-up of bribery to obtain coveted mining rights and requested his sentence to be upheld. 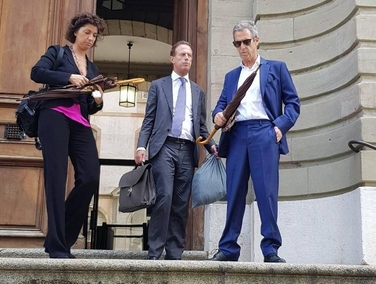 Beny Steinmetz (C) leaves a court in Geneva. (Photo: Daniel Balint-Kurti, OCCRP, All Rights Reserved)Steinmetz, 66, and two of his former partners were appealing their January 2021 convictions for bribing the wife of the late President of Guinea, in West Africa, to obtain the world’s largest undeveloped iron ore concessions.

Steinmetz was sentenced to five years and fined 50 million francs (US$56 million), while Frédéric Cilins, a fixer who helped him get the mining rights, received a three-and-a-half-years sentence. Sandra Merloni-Horemans, a Belgian national who administered hundreds of companies in Steinmetz’s corporate group, is fighting a two-year suspended sentence.

It could be months before there is a final verdict in the complex case, which comprises more than 250 thick folders of evidence, all of which were lined up on shelves behind a three-judge panel, headed by Judge Catherine Gavin.

Prosecutor Yves Bertossa said he saw “no element in favor of the accused.” Steinmetz “didn’t hesitate to use one of his friends” to send bribe money under false pretenses, and he used Cilins “as a pawn… to carry out the dirty work,” the prosecutor added.

In final comments to the court, Steinmetz said he was “upset by what the public prosecutor has said. I’m innocent and I have nothing to reproach myself with”.

Steinmetz and his lawyers argued that no bribes were paid to obtain the rights to blocks 1 and 2 of Guinea’s Simandou mountains. After having obtained the rights in 2008, his company Beny Steinmetz Group Resources (BSGR) sold a 51% stake to Brazilian mining giant Vale for $2.5 billion, equivalent to twice Guinea’s budget at the time.

Steinmetz’s principal lawyer, Daniel Kinzer, said his client did not discuss the mining rights with then-President Lansana Conté’s wife, Mamadie Touré, and that “there was no active corruption, but at most lobbying or traffic of influence,” which he said “is not punishable under Swiss law.”

After having dismissed his leading lawyer in last year’s case, Marc Bonnant, Steinmetz brought advocate Christian Lüscher – also a Swiss MP, for Geneva - onto his team for the appeal. While Kinzer focused on factual and legal details, Lüscher reprised allegations that Steinmetz is the victim of a plot by billionaire financier George Soros and Alpha Condé, the Guinean President who withdrew BSGR’s mining rights in 2014.

Condé was overthrown in a military coup last September. “The soldiers were clear” that corruption was “the reason for which Alpha Condé was arrested,” said Lüscher. Bertossa responded that “this is not the trial of Alpha Condé”.

Prosecutors argue that Steinmetz had full knowledge of the bribery scheme, and that the founding act was a February 20, 2006 contract between Touré and Cilins’ middleman company, Pentler, under which she was promised a stake in Simandou in return for helping BSGR obtain the mining rights. BSGR later signed contracts directly with Touré.

For years, BSGR and Steinmetz insisted the contracts were fake, but in May this year a Paris arbitration court — the International Center for Settlement of Investment Disputes — ruled against the company in a dispute with Guinea, and said that the contracts were genuine.

“I became aware of these accords much later,” Steinmetz told the court. “If someone signed them, it wasn’t me.”

The Swiss authorities have given Steinmetz permission to leave the country before the verdict is announced. Asked if Steinmetz would take the case to Switzerland’s supreme court, the Tribunal Federal, should he lose, his spokesman Marc Comina said: “It’s a certainty.”