African rhino poaching rates declined from 3.9% of the continent's rhino population in 2018 to 2.3% in 2021, most likely due to better policing, but the total number of rhinos fell from 23,562 to 22,137 – says a new report by the International Union for Conservation of Nature (IUCN). 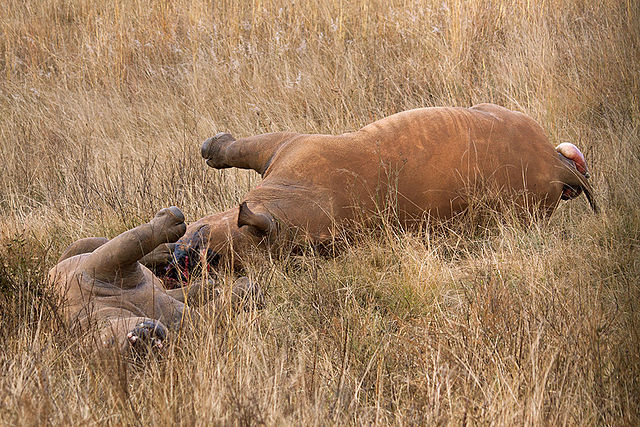 Rhino poaching in Africa started to intensify in 2008, fuelled by a booming demand for rhino horn in China. (Photo: Hein Waschefort, Wikimedia, License)“The overall decline in poaching of rhinos is encouraging, yet this remains an acute threat to the survival of these iconic animals,” said Sam Ferreira, IUCN’s rhino expert.

“The effects of decreasing poaching rates are not resulting in substantive population increases because the illegal killing of rhinos has additional indirect effects on rhinoceros dynamics,” explained the report.

As rhino calves tend to be existentially dependent on their mothers for up to three years, poaching substantially reduces cows’ lifetime reproductive output. Another important effect concerns a decreased population density, which might reduce mating opportunities.

Africa is home to populations of white rhinos, classified as near threatened, and critically endangered black rhinos.

Rhino poaching on the continent started to intensify in 2007. It was notably fuelled by a booming demand for rhino horn in China, where it is used in traditional medicine and increasingly also serves as a status symbol of success and wealth.

The report highlighted marked differences in the success of rhino conservation across the continent.

The decline in the number of white rhinos was predominantly accounted for by South Africa, whose white rhino population shrank by 2,657 from 15,625 in 2018. The other major white rhino range states — Namibia, Kenya and Zimbabwe — saw their population of the species grow.

The black rhino population expanded in all range states with the exception of Botswana, which because of an ongoing poaching crisis lost nearly half of its rhinos between 2018-2021. According to the Environmental Investigation Agency (EIA), the crisis is driven by corruption, debilitating the capacity of authorities to crack down on poachers.

While falling levels of poaching seem to indicate that rhino protection is becoming more efficient, the report highlighted that poachers are adapting their modus operandi to ensure the continued success of their operations.

In South Africa for example, organized syndicates were reported to infiltrate the employees of Kruger National Park to solicit information such as rhino locations and ranger deployments.