The U.S. sanctioned the reputed girlfriend of Russian President Vladimir Putin, adding her to the list of members of the Russian elite that were punished for the Kremlin’s invasion of Ukraine. 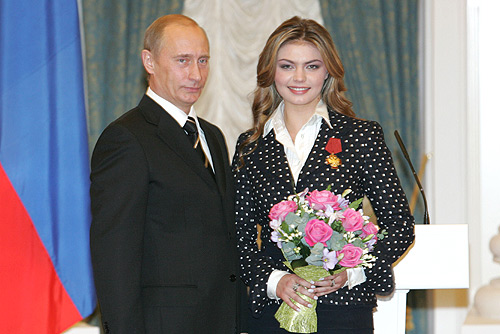 Alina Kabaeva (R), reputed girlfriend of the Russian President Vladimir Putin (L), found herself on the U.S. black list of Russian elite supporting Putin's regime and Russian invasion of Ukraine. (Photo: Kremlin.ru - Russian Presidential Press and Information Office, Wikimedia, License)Alina Kabaeva is one of the six people the U.S. Treasury’s Office of Foreign Assets Control (OFAC) added to the list, along with a large multinational corporation and a financial institution that was described as a sanctions evasion scheme, according to a statement released on Tuesday.

“These elites and businesses operate in economic sectors that generate substantial revenue for the Russian regime, including from sources outside of Russia,” read the statement.

Popova is the First Deputy Director of Non-State Development Institute Innopraktika, a Russian technology firm. She was designated, among other things, for functioning or having operated in the technology sector of the Russian Federation economy.

OFAC said that Popova was also designated as the spouse of Kirill Dmitriev, the CEO of the Russian Direct Investment Fund, a US$10 billion sovereign wealth fund established by the Russian government to co-invest in the Russian economy. U.S. authorities have already blocked his property and interests in property.

Guryev is also known for his Witanhurst estate, the second-largest in London after Buckingham Palace. The U.K. blacklisted him as well. Australia, Canada, the EU, Switzerland, and the U.K. joined the U.S. in designating also his son Andrey Andreevich Guryev for “operating or having operated in the financial services sector of the Russian Federation economy.”

The U.S. also sanctioned Russian billionaire Viktor Rashnikov, the Chairman of the Board of Directors of Magnitogorsk Iron and Steel Works (MMK), one of the world’s largest steel manufacturers. According to OFAC, MMK – one of Russia’s major taxpayers, providing a significant source of cash to the Russian Federation’s government – was also designated, as well as a number of its subsidiaries.

OFAC said that the latest designations were taken “in tandem with the U.S. Department of State, which imposed additional sanctions on entities and individuals, as well as visa restrictions.”

The OFAC designations mean that all property and interests in property of the designated individuals or entities that are in the U.S. or in the custody or control of U.S. persons are blocked and must be reported to OFAC.

She emphasized that the Treasury Department would utilize every instrument at its disposal to ensure that Russian elites and Kremlin enablers are held accountable for their role in a war that has claimed countless lives.

“Together with our allies, the U.S. will also continue to choke off revenue and equipment underpinning Russia’s unprovoked war in Ukraine,” said Yellen.