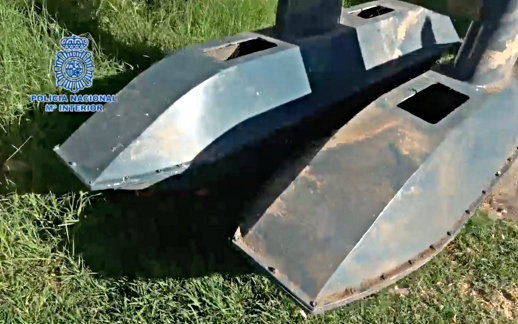 A novelty in drug trafficking – underwater drones. (Photo: Policía Nacional, Twitter, Screenshot, License)Drug traffickers use these submarine drones to avoid detection and bring drugs across the Strait of Gibraltar into Spain and Europe.

“The navigation of these devices was done remotely via GPS, so that a person or a member of the organization could check the location at any time and then arrange the docking from home with a tablet and the right software,” Juan Antonio Siloleo, head of a central narcotics brigade, told local media.

Spain is a major entry point for cocaine and other drugs coming into Europe because of its proximity to Morocco, which is a major producer of hashish, and its links with cocaine producers in South America.

The suspects produced underwater drones with double bottoms, trailers and surfboards. All those changes enabled drug traffickers to transport loads of up to 800 kilos.

During the raid, in addition to the seizure of three underwater drones, authorities spotted six large flying drones near the port city of Cadiz, Siloleo said.