Spain’s National Police, in cooperation with Italian and U.S. authorities, recovered last week a rare archeological piece dating back to Roman times that was stolen 60 years ago. 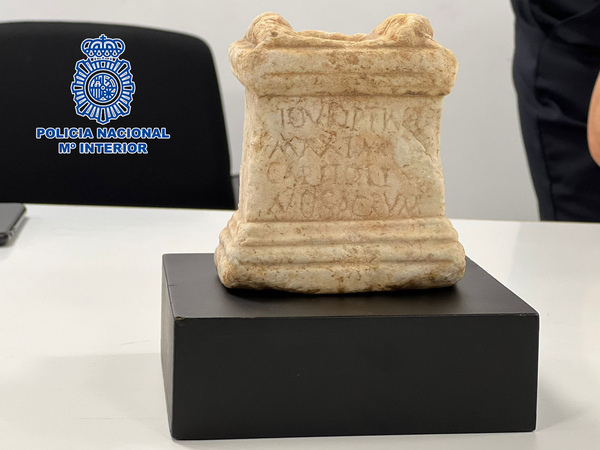 The white marble altar, stolen 60 years ago, was originally used in Roman times to present offerings to the divine. (Photo: Policia Nacional, License)The artifact, a small, white marble altar, only 12 centimeters high, was originally used to present offerings to the divine. Essentially, such altars were religious monuments placed on consecrated land or within temples and other places of worship.

This altar in particular holds considerable historic value for Spain’s Archaeological Museum of Tarragona, as it is included in the Corpus Inscriptionum Latinarum database.

Written by the German classical scholar Emil Hübner and published in 1869, this compendium contains a comprehensive list of Latin inscriptions that have survived for millenia on Roman-era artifacts.

Inscribed on the white marble is a proclamation of glory to Jupiter, the Roman God of the sky and thunder. It reads “Iovi optimo maximo capitolino sacrum,” which translates as “To the Sacred Jupiter, the best and greatest at Capitolin.”

Despite the altar’s theft from the museum in 1962—and therefore low chance of ever resurfacing again—authorities caught a lead in 2015 when Italy’s Carabinieri caught wind of its possible location.

Italian authorities reported that the antiquity was listed as recently sold on an online auction house in the United States. From there, investigators went about tracing its movements, where they discovered that it had previously been purchased in 2002 from a well-known auction house based in London.

Police worked in tandem with the auction houses and eventually managed to identify the altar’s current holder: an American who at the time was residing in London.

The person in question reportedly handed over the artifact voluntarily to Spain’s Embassy in London upon learning of its theft 60 years ago, according to Spanish police.

While most antiquity thefts result in the artifacts being circulated on the black market, this one resurfaced without anyone noticing for years.

The inscription greatly helped police in properly identifying the altar. Curators at Tarragona’s Archaeological Museum used it to confirm beyond any doubt that the piece was the one stolen from them back in the 1960s.

Before its theft, this particular antiquity had been a part of the museum’s collection since 1880.