British authorities arrested 24 people suspected to be involved in the trade of fraudulent passports for U.K.-based organized crime groups, either as manufacturers, abettors, a middleman, or as the group’s clientele. 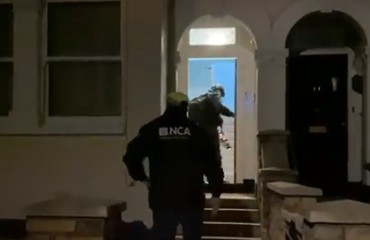 British authorities arrested 24 people suspected to be involved in the trade of fraudulent passports for U.K.-based organized crime groups, either as manufacturers, abettors, a middleman, or as the group’s clientele. (Photo: National Crime Agency, Twitter, screenshot)More than 250 officers across London, Kent, Essex, and Merseyside took part in a series of early-morning raids on Monday. In what was known as ‘Operation Strey’, the National Crime Agency (NCA) said that they dismantled a crime group that enabled fugitives and criminals such as transnational drug and firearm traffickers to cross borders undetected.

Investigators claim that the group specialized in supplying fraudulently-obtained genuine passports (FOGs), which are authentically issued passports containing false information. This means the FOGs are capable of deceiving the methods used for detecting counterfeits, resulting in a highly sought after commodity for criminals worldwide.

According to the NCA, the suspects would source individuals willing to provide their personal information for the FOG passports. This information would be combined with the client’s photo to create an authentically issued passport used by criminals to pass themselves off as law abiding citizens.

Those who supplied their personal information to the group were reportedly paid up to £2,000 (US$2,718) for their services.

“We believe that this group’s activities has enabled some of the most serious organized criminality in the U.K. and around the world,” said Jacque Beer, NCA Regional Head of Investigations.

Beer went on to say that the targeting of these “elite criminal specialists” has broken up a “widespread and deep-rooted criminal conspiracy” within the United Kingdom.

The intelligence acquired from investigating these FOG passports has allowed international authorities to recognize them and subsequently arrest their handlers. This includes other countries within Europe as well as countries branching out as far out as Dubai, Australia, Thailand and Brazil, according to the NCA.

British authorities have released all 14 people suspected of assisting the group as well as four alleged members of the group, pending further investigation. The remaining five managed to post bail.

A 66-years-old man whom the NCA believes had acted as a broker between the suspects and their clientele was arrested on Tuesday and charged the same day by the Westminster Magistrates’ Court with “one count of conspiracy to pervert the course of public justice, two counts of conspiracy to make a false instrument and one count of money laundering.”

The group’s clientele is said to include various criminals of noticeable renown, such as arms traffickers and members of high-profile Irish and Scottish organized crime groups.

One such suspected client is Jamie Acourt, who was arrested and extradited from Spain on drug-related charges in 2018, for which he is currently serving a nine-year sentence.

Acourt is also a suspect in the 1993 murder of Stephen Lawrence, which authorities believe was racially motivated, according to the BBC.