Belarus Continues to Crack Down on Independent Media

Belarus authorities continue to keep the editor of the country’s oldest weekly and one of the last independent news outlets in the country incarcerated and have closed down the national journalist association in what is being seen as part of an ongoing crackdown on media. 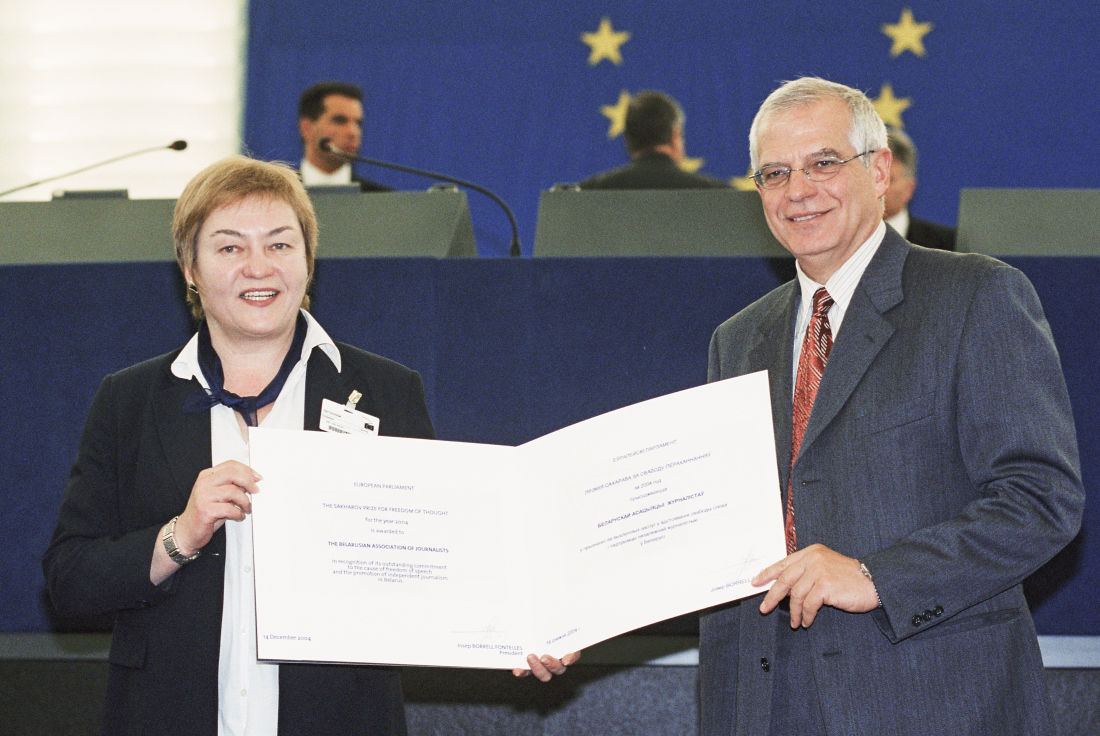 Belarusian Association of Journalists was awarded with the Sakharov Prize for Freedom of Thought in 2004. Lukashenko's regime shut it down in 2021. (Photo: Europeana)Andrej Skurko, editor of Naša Niva, was jailed in July for “organizing or taking an active part in group actions grossly disturbing public order,” according to the charges levied against him. His elderly parents have appealed on authorities to release him as they and his 18-month-old son depend on his support, the country’s journalists association said Friday.

However, the same association — the Belarrusian Association of Journalists (BAJ) — just like the Belarusian PEN Center, the Office for the Rights of Disabled People, the National Youth Council, the Belarus Press Club, organizations concentrating on gender rights, as well as those that help elderly people, have been among the dozens of organizations slated for liquidation by Alexander Lukashenko’s regime as part of a crackdown on media and civil society that started after the country’s election last summer.

“After organizing fraudulent elections to keep himself in power, the Belarusian dictator, Alexander Lukashenko, proceeds to an outright liquidation of all sectors of Belarusian civil society,” the President of the European Federation of Journalists (EFJ), Mogens Blicher Bjerregård, said in a statement.

“Amid continuing massive violations of the right to freedom of expression and media freedom in Belarus, OSCE Representative on Freedom of the Media, Teresa Ribeiro, deplored the decision of the authorities to shut down the Belarusian Association of Journalists (BAJ),” Organization for Security and Cooperation in Europe said in a statement.

The Minsk-based court’s decision to liquidate the BAJ is part of the “unprecedented repression of the state” against independent media organizations and journalists in Belarus, which started following the country’s 2020 presidential elections, according to BAJ.

The persecution of the BAJ started in June this year when the Justice Ministry launched an audit and asked the “to provide thousands of administrative and financial documents on its activities, including lists of its members, covering the last three years,” according to BAJ. The deadline was the same day.

The association said it managed to deliver the documentation but the Ministry still asked for the BAJ to be closed, citing insufficient addresses of a few association’s branches as violations of the law.

“This closure is part of the systematic and continued repression of all independent voices in the country,” the European Union said in a statement, reminding that 27 media workers were among the 649 Belarusians who have been recognised as political prisoners.

“The EU strongly condemns this ongoing repression, calls on the authorities in Belarus to stop it, adhere to its international commitments and obligations within the U.N. and OSCE, and to finally respect the human rights and fundamental freedoms of their own population,” read the statement.

The New York-based Committee to Protect Journalists (CPJ), which promotes press freedom worldwide and defends the right of journalists to report the news safely and without fear of reprisal, has also denounced the news from Minsk.

The International Federation of Journalists (IFJ) underlined that the “BAJ and its membership of over 1,300 media workers has promoted freedom of expression and independent journalism in Belarus, facilitating the exercise of civil, social, and cultural rights,” for more than 25 years.

The European Parliament bestowed the EU’s highest human rights honor — the Sakharov Prize for Freedom of Thought — on the BAJ in 2004. Seven years later, the group won the Atlantic Council’s Freedom Award, and last year, the BAJ became the first winner of the Canada-U.K. Media Freedom Award, which honors individuals and organizations campaigning for media freedom.

However, the association’s liquidation does not imply the end of its activities, the BAJ chairman, Andrei Bastunets, declared. “We will continue to do our work regardless of the decisions of courts and administrative bodies, by all legal means.”