It has never been more dangerous to be a journalist in Belarus, where President Alexander Lukashenko’s regime is trying to silence and suppress the independent media, reporters said at an online press conference in Minsk on Tuesday. 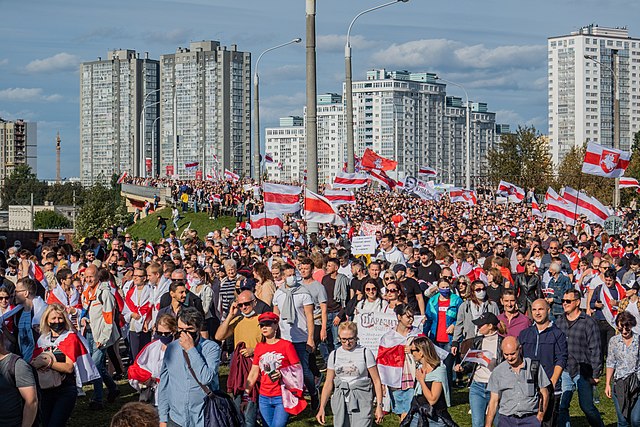 Massive protests in Minsk in 2020, following the Belarusian elections and victory of Alexander Lukashenko. Soon after the protests, a new wave of persecution of independent media, writing about massive anti-Lukashenko protests, started. (Photo: Homoatrox, Wikimedia, License)Only this year, they said, Belarusian law enforcement raided and searched more than 100 media premises or homes of journalists or editors, detained 87 media workers of which 29 are still in jail and pressed 21 administrative charges.

Just last week police shortly detained reporters from one of the country’s oldest weekly newspapers, Naša Niva, raided its offices and the apartments of two editors and blocked the news outlet’s website (nn.by).

The human rights center ‘Viasna’ said that reporters were questioned and released under a gag order — which bans them from making any public comment — while editor-in-chief, Jahor Marcinovič, and editor, Andrej Skurko, were detained and suspected of “organizing or preparing and participating in activities that would violate the public order and for planning or organizing mass riots,” according to the Belarusian Association of Journalists (BAJ).

“Naša Niva’s editors are still in jail,” BAJ Deputy Chairman, Aleh Aheyeu, said during an online press conference of his association and of representatives of outlets that have been targeted by the Minsk regime.

The state’s propaganda, as he explained, labels some independent media outlets as terrorist or extremist, building a basis for further persecution.

However, the crackdown has not silenced independent media, reporters said.

“Working for independent media here is like suicide,” Naša Niva journalist Nastassia Rouda said. The regime will probably make her and her colleagues leave Belarus but they will continue to do their job from abroad, she stressed.

Editor at Hrodna.life, Iryna Novik, who was shortly detained in late May, said some of her colleagues have already left the country and others work from home under great psychological and economic pressure. They are “waiting for someone to knock on their door,” while advertisers are cancelling deals.

“The Economic Court of Minsk on Wednesday (July 7) had a closed session upholding the decision of the extra-judicial commission to recognize the materials of the portal as extremist,” BAJ said and underlined that 15 employees of TUT.BY and its partner organizations, remain behind bars.

Aliaksandra Pushkina of the TUT.BY, which started working under a new name — Zerkalo.io — said that the regime managed to destroy their team of 270 people and to block all of their bank accounts.

However, they won’t give up and they will use different channels to reach their readers, like the Telegram web platform, she said.

“We still have a significant amount of followers. They understand us, find us, follow us,” she said.

Belarus also accused Andrei Aliaksandrau, the founder and chief editor of the Belaruski Zhurnal news website, of treason last week. He is facing up to 15 years in jail if convicted.

The New York-based Committee to Protect Journalists (CPJ), which promotes press freedom worldwide and defends the right of journalists to report the news safely and without fear of reprisal, stressed that “Belarusian authorities should immediately release journalist Andrei Aliaksandrau, drop all charges against him, and ensure that journalists can work freely and without fear.”

“We also keep the U.N. Special Procedures Office (human rights) and the Organization for Security and Cooperation in Europe (OSCE) Special Representative on Freedom of the Media informed and we receive support from these bodies,” Aheyeu said.

The most bizarre case of Lukashenko’s regime remains the case of Roman Protasevich, a Belarusian activist and the former editor in chief of Nexta, a media outlet that shed light on Lukashenko’s crackdown on civil society after the 2020 presidential election.

In May this year, a Belarusian fighter jet forced a passenger plane en route from Greece to Lithuania to land in Minsk, only to arrest Protasevich.