As the EU Plans new Sanctions, Russia Continues to Back Belarus

As the West is considering further sanctions in response to Belarus’ hijacking of a Ryanair flight and the subsequent arrest of a journalist last weekend, President Alexander Lukashenko met on Friday with Russian President Vladimir Putin in what appeared to be a further sign of Moscow’s support for Minsk. 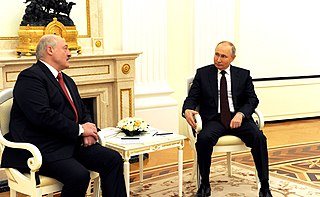 The Belarussian strongman met on Friday with Putin in Sochi, where the two agreed that the West’s reaction to the incident was an “outburst of emotion.” (Photo: The Presidential Press and Information Office, Wikimedia, License)Belarus outraged the West last Sunday when it sent a MIG-29 to force down the passenger plane flying from Athens to Vilnius so it could arrest 26-year-old journalist Roman Protasevich who has been critical of Lukashenko’s regime.

In response, the EU banned Belarussian flights from its airports and is now considering further economic sanctions that would target Belarus’ main export item -- a type of mined salt called potash -- as well as the nation’s oil and financial sectors, Reuters reported.

Two European airlines said on Friday that Russia had refused to let them fly to Moscow because they were avoiding Belarus airspace, CNN reported.

Lukashenko has remained defiant and suggested that the EU should cover the costs of him forcing down the Ryanair jet and that it should think twice before it imposes further sanctions against his country.

"And before you make sharp, thoughtless movements, remember that Belarus is the center of Europe. And if something breaks out here - this is another war, a world war. The previous one, by the way, also started here,” Lukashenko said, speaking before the Belarussian National Assembly but addressing the West.

The start of World War II is considered to be the German invasion of western Poland in 1939 but it is possible that Lukashenko is referring to the start of Operation Barbarossa and German-Soviet fighting on the Eastern front, which began with Nazi advance through the Belarussian City of Brest-Litovsk in 1941.

With the West looking to punish Lukashenko for human rights abuses, alleged election fraud and last weekend’s interception of the passenger plane, the Belarussian strongman met on Friday with Putin in Sochi.

The two agreed that the West’s reaction to the incident was an “outburst of emotion,” Reuters reported.

The Russian President said that the West was “silent” when in 2013 a plane carrying Bolivia’s President Evo Morales was forced to land in Austria at the time the United States were after whistleblower Edward Snowden.

Minsk’s behavior was also condemned by the G7, a group of the world's wealthiest nations on Thursday. The group said the Ryanair incident “jeopardized the safety of the passengers and crew of the flight,” while the arrest of the journalist “represents a serious attack on media freedom.”

“We demand the immediate and unconditional release of Raman Pratasevich, as well as all other journalists and political prisoners held in Belarus,” the leaders said.