A Texas Judge Shot Down The NRA’s Bankruptcy Petition

A federal judge in Texas dismissed on Tuesday the National Rifle Association’s bankruptcy claim, arguing that the type of threat the organization faced from the lawsuit brought by New York Attorney General Leticia James did not qualify for Chapter 11 bankruptcy protections. 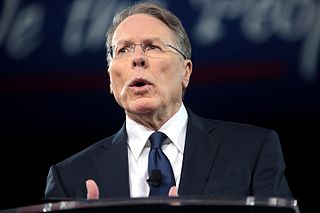 Wayne LaPierre (Photo: Gage Skidmore, Flickr, License)The NRA filed for bankruptcy in January, seeking to leave it’s incorporated home of New York to restructure in Texas - a move the New York Attorney General’s office argued should be denied as it was an attempt to avoid oversight.

The state of New York, which has been the NRA’s home for 150 years, launched an investigation last year that ultimately led State Attorney General Leticia James to file a lawsuit seeking to dissolve the organization.

“The NRA’s influence has been so powerful that the organization went unchecked for decades while top executives funneled millions into their own pockets,” Attorney General James said about the complaint. “The NRA is fraught with fraud and abuse, which is why, today, we seek to dissolve the NRA, because no organization is above the law.”

Judge Hale heard arguments for a month from the National Rifle Association (NRA) and an attorney representing the state of New York during a virtual hearing in Dallas. Ultimately the judge agreed that seeking bankruptcy for the purpose of dissolving its relationship with the state of New York was not how Chapter 11 protections were intended to be used.

"The NRA clearly and undisputedly had no financial reason to file bankruptcy," attorney Gerrit Pronske, who represented the state of New York said. "The NRA is vastly solvent and filing bankruptcy is an abuse of this court's jurisdiction."

The state of New York accused the NRA of filing an illegitimate bankruptcy, citing a letter from Executive Vice President Wayne LaPierre to NRA members, assuring them that the organization was “as financially strong as we have been in years.”

“You know that our opponents will try to seize upon this news and distort the truth,” the letter to NRA members said. “Don’t believe what you read from our enemies. The NRA is not ‘bankrupt’ or ‘going out of business'."

LaPierre was also at the center of the allegations of financial impropriety brought by Attorney General James. The complaint listed multiple misuses of charity funds that benefitted LaPierre and his family. For Example, LaPierre spent hundreds of thousands of dollars to travel in private jets, and revealed that he hadn’t flown commercially since 2013, according to court records.

The LaPierre family took frequent trips including eight trips to the Bahamas over a three year period which the complaint said cost the NRA half-a-million dollars and came accompanied by time on a private yacht owned by an NRA vendor.

The Nonprofit Executive also accepted trips to Africa paid for by NRA vendors to go on safari with his wife, according to the complaint.

While LaPierre defended his behavior in court, saying the private jets and yachts were for “security” and the African safari was while filming a TV program for the NRA, the timing, location, and motivation of the Chapter 11 filing left New York attorneys suspicious.