As COVID Restrictions Ease, Smuggling in the Indian Ocean is on the Rise

The easing of COVID restrictions may have contributed to the recent rise in smuggling incidents in the Indian Ocean which saw everything from old Soviet arms to African psychotropic plants illegally crossing its waters in March. 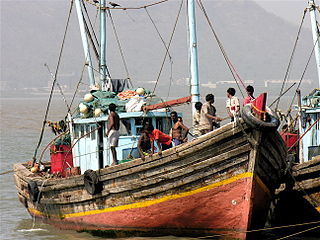 Smugglers mostly used smaller fishing vessels rather than hiding their shipments in large containerships. (Photo: Jon Hurd, Flickr, License)According to a recent report by the Information Fusion Centre for the Indian Ocean Region, the Indian Navy recorded 77 incidents, which is a 75% increase compared to the 44 incidents reported in February.

The rise may, “in part, be attributed to the relative easing of COVID-19 related restrictions and greater number of enforcement operations by authorities,” the navy said.

Among the products smuggled were arms and drugs, most commonly methamphetamines, but also heroin, cannabis and khat, a type of plant-based stimulant native to the horn of Africaas well as Indonesion wildlife and Sri Lankan spices.

In one incident, a shipment of AK-47 rifles and over 1,000 rounds of ammunition was found in an otherwise innocent looking fishing vessel.

“This incident highlights the possible narco-terrorism nexus and the possibility of smuggling routes of seemingly benign items like domestic products, being exploited for more sinister purposes such as landing of arms and explosives,” the report said.

However, law enforcement also intercepted several other illegal trades in the region, such as contraband turmeric, hardwood, cigarettes and even wildlife.

Alongside the increase in smuggling, March also saw a 75% jump incidents of poaching over the previous month. In a boat caught off of Indonesia, authorities found over 900 contraband turtle eggs.

“Authorities intercepted a suspicious fishing boat, recovered 275 hawksbill eggs and 628 ordinary turtle eggs which were stuffed inside a cardboard box,” the report said.

A delicacy in high-end restaurants and bars, the market for turtle eggs has led poachers to destroy some 90% of nests in the region, driving the creatures onto the endangered species list.

“Poachers currently have the upper hand on circumventing local authorities, and little is known about the routes they use to smuggle endangered species,” the report said.