With pressure mounting on international institutions to cut all ties to Myanmar’s junta, the World Bank Group has refused to say if it is considering moving out of the office it rents in a complex on military-owned land. 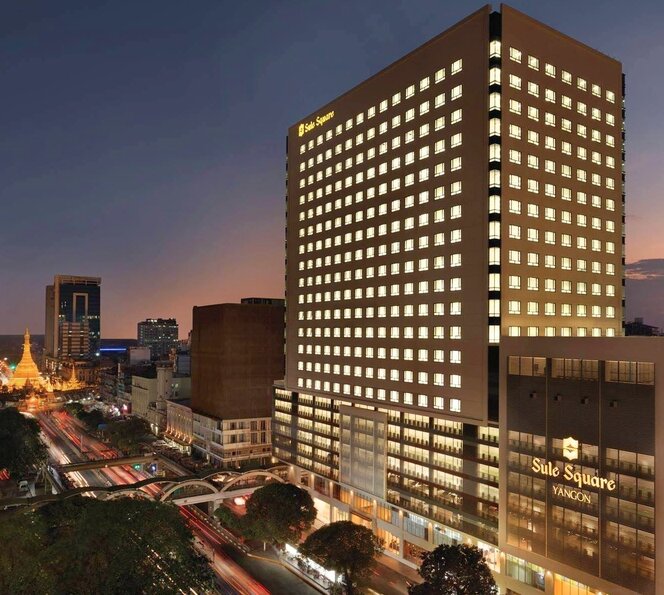 Sule Square mall and office in Yangon, Myanmar. (Photo: Facebook)Foreign investors have found themselves in an awkward position since February 1, when Myanmar’s military abruptly reversed a decade of political and economic reforms by ousting the civilian government.

Some international firms have said they would halt business to prevent investments from funding the military, which has killed at least 769 people, including dozens of children, since the coup.

“Investors have a responsibility to take action and ensure they are not contributing to and profiting from the bloodshed,” said the advocacy group Justice For Myanmar in a statement on Thursday, as it released a list of companies with connections to the military.

Included on the list was Shangri-La Asia Ltd, which owns Sule Square, a high-end development in the center of Myanmar’s commercial capital, Yangon, that hosts the World Bank Group and other foreign companies and institutions.

“We are currently assessing the situation in Myanmar, according to internal policies and procedures that we are following carefully,” said a World Bank Group spokesperson by email.

The spokesperson refused to say if the assessment included its rental payments to a company that has provided funds to the military, or if it was aware when it rented the office that Sule Square was on military-owned land.

“The lease was signed a number of years ago based on World Bank Group procurement policies for renting and acquiring real estate space,” said the spokesperson, who declined to specify whether the policies include restrictions on providing funds indirectly to militaries.

The land Sule Square sits on is owned by the Quartermaster General’s Office, which oversees military businesses,according to a filing with the Myanmar Investment Commission by another tenant.

Sule Square was developed by two Myanmar-registered companies, Traders Square Company and Shangri-La Yangon Company Limited. Both are owned by Shangri-La Asia Limited, an international property development company that is incorporated in Bermuda, and raises money on the Hong Kong Stock Exchange.

Shangri-La Asia and its owner, the Kuok Group, which is headed by Malaysian billionaire Robert Kuok, did not respond to emailed questions. The Hong Kong Stock Exchange said it “does not comment on individual cases or companies.”

The amount of money Myanmar’s military has received from leasing the land for Sule Square Office Tower and Retail Mall is unknown. But Shangri La said in a 2017 statement that it spent US$125 million on the 23-floor development.

“The modern office and retail complex will serve as an ideal venue to bring the community together, while meeting the needs of business corporations,” said Phillip Couvaras in the statement announcing the opening of the development.

Couvaras is listed in company documents as a director with both Traders Square Company and Shangri-La Yangon Company. He did not reply to a request for comment.

Aside from the Kuok Group, shareholders of Traders Square Company are three firms with unknown owners that are registered in the British Virgin Islands, and one in Samoa.

Foreign investors in Myanmar have come under intense scrutiny since the coup, especially those with direct business ties to the military –– a relatively common situation, as the military developed extensive economic interests over almost five decades of unbroken rule until 2011.

The U.S. sanctioned MEHL in March, along with another military conglomerate, the Myanmar Economic Corporation (MEC). India’s Adani Group said on Tuesday that it could abandon its investment in developing a port in Yangon if it is found to be violating U.S. sanctions by paying about $30 million to MEC in land lease fees.

The World Bank Group announced in February that it had “temporarily put a hold on disbursements” to its projects in Myanmar, and implemented “enhanced monitoring” of those already underway.