Mexico’s parliament has passed a new law imposing restrictions on foreign intelligence activities in a move the United States has warned will make citizens of both countries “less safe.” 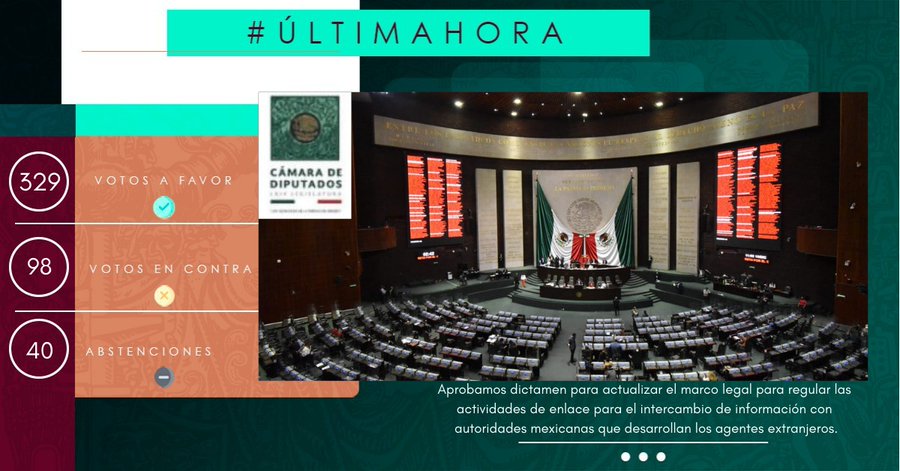 Laws revoking diplomatic immunity for foreign agents passed Mexico’s parliament with a majority of 329 to 98 (Credit: Camara de Diputados)The additional provisions under Mexico’s national security laws, passed with a considerable parliamentary majority on Tuesday, have revoked diplomatic immunity for foreign agents operating in the country, as well as requiring them to share present and future intelligence with Mexican officials.

U.S. Attorney General William Barr said in a statement last Friday that the new legislation “would have the effect of making cooperation between our countries more difficult,” only serving to “benefit the violent transnational criminal organizations and other criminals that we are jointly fighting.”

As the foremost entry point for narcotics entering the U.S., Mexico has long proven a key target for U.S. enforcement agencies in their historic war on drugs, with ongoing operations provoking heated debate over questions of national sovereignty.

It was those questions that in October saw Mexico City successfully lobby for the repatriation of General Salvador Cienfuegos, a former defense secretary who’d been detained on narcotics charges in the U.S. for his alleged role as chief of an unholy alliance between Mexico’s armed forces and the infamous H-2 drugs cartel. Facing no such charges in Mexico, he has returned to his home country a free man.

President Andres Manuel Lopez-Obrador sent proposals for the recent legislation to parliament in early December, after publicly criticising the U.S. Drug Enforcement Administration’s checkered record in Mexico, accusing the agency of coming to the country “as if they owned the place.”

His comments struck an odd tone against previous statements on U.S.-Mexico relations in the arena of law enforcement. As recently as September, he said he was open to extraditing former presidents to the U.S. if it meant they faced prosecution for the endemic culture of graft that has beleaguered successive administrations — despite this falling largely under Mexican jurisdiction, as well as there being no indication that any of Lopez-Obrador’s predecessors are presently facing investigation.

News of the recent legislation also comes during a turbulent time in the U.S. politics, with incumbent Donald Trump mounting repeated, as-yet-unsuccessful challenges against the outcome of the recent presidential election, which in turn have seen Attorney General Barr — who refused to support Trump’s claims of voter fraud — announce on Monday he would be stepping down his post next week.

Democratic candidate Joe Biden’s victory in the polls has reportedly failed to inspire enthusiasm from Lopez-Obrador, who has historically enjoyed relatively warm relations with President Trump.

Meanwhile, Mexico is set to end the year with one of its highest annual homicide records to date — having broken monthly records in the first half of 2020 — due to rates of violence widely attributed to the militarization under former president Felipe Calderon of its enforcement efforts against the country’s notorious drug cartels.

Recent OCCRP investigations have also revealed how one of the country’s leading narcotics networks, the Sinaloa syndicate, is continuing to expand its presence in Europe, as well as ties between the ultraviolent Los Zetas cartel and Mexico’s former consul in Barcelona.