The U.K. Border Force officers have seized more than a tonne of cocaine, estimated at 100 million British pounds (US$133.28 million), hidden amongst a shipment of banana pulp bound for Europe, the U.K. Home Office confirmed to OCCRP Monday. 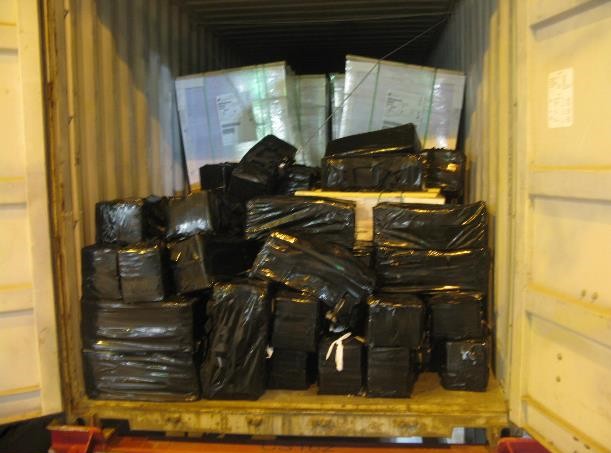 More than a tonne of cocaine was stashed in banana pulp. (Photo: U.K. Home Office, License)“The Class A drugs were detected at London Gateway on 12 November - having been concealed within a shipping container transported on a commercial vessel docked at the port -  as part of routine inspections,” the Home Office said.

It added that the cocaine, which weighed a total of 1.06 kilos, “was suspected to have been placed in the cargo in Colombia and was bound for Antwerp, via Rotterdam.”

Home Secretary Priti Patel said that the “significant seizure” sends a “stark message” to drug traffickers, adding that the U.K. would “use every inch of our law enforcement powers to track down and stop drugs from coming” into the country.

The shipment makes for the second largest such seizure by British authorities over the past few months. Earlier in September, border force officers “found 1,155 kilos of cocaine in a shipping container loaded with paper which was bound for Antwerp,” the Home Office included in its statement.

“These significant seizures have taken a large amount of dangerous drugs off the streets, which not only reduces the significant harm they cause to communities but also makes a huge dent in profits of smugglers and dealers,” the Head of Maritime Command for Border Force, Steve Whitton, said.

Branch commander of the U.K. National Crime Agency (NCA), Jacque Beer, also stressed that the recent success of such actions by law enforcement have inflicted “a significant hit to the organized crime groups involved, meaning less profit for them to reinvest” in further criminal enterprises.