Haiti’s financial watchdog has told the country’s senate that since 2008, no fewer than six successive governments have systematically mishandled development projects financed by a Venezuelan aid program. 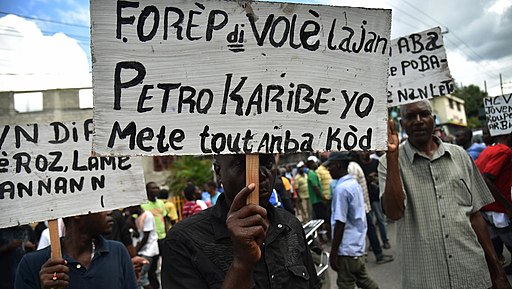 A "Petro-challenger" in August 2018. (Photo: Medyalokal, CC BY-SA 4.0)“Important shortcomings were associated with the planification and execution of the programs and development projects financed by the PetroCaribe fund”, the High Court of Audits of Haiti said in a report submitted to the senate on Monday.

Established by former Venezuelan leader Hugo Chavez in the 2000s,PetroCaribe was a loan program designed to help Caribbean countries create their own development funds, thereby decreasing their reliance on Western aid.

Under an agreement signed by 17 other countries, Venezuela would sell oil at very low prices so that signatories could make significant profits by selling the goods on to local companies. The resulting revenue was then split between Venezuela and the signatory country’s development fund.

Haiti entered the agreement in 2007 and, according to the Court of Audits, profited by approximately US$2.2 billion before the closure of the PetroCaribe program with the collapse of the Venezuelan economy.

The court’s report added that the fund had been used to finance over 400 different development projects in Haiti. It said investigators had found shortcomings in virtually all ministries and institutions that were granted money as a result, and that this reflects the high level of corruption among public officials in the country.

Among those implicated in the previous report is President Jovenel Moise, who is accused of using a company formerly under his control to embezzle $1 million in PetroCaribe funds, an allegation he firmly denied.

The audit body presented a long list of deficiencies in the management of the money. Among other things, projects were allegedly financed without prior needs assessment and cost estimates, which led costs and schedules to overrun. Contracts were also awarded without tenders, and spending was undertaken without supportive documents, leading to tax irregularities.

“The investment projects and the contracts linked to the PetroCaribe fund were not managed in accordance with the principles of efficiency and economy,” the auditors concluded.

They also said that some public institutions failed to share all documentation relevant to the inquiry, which complicated the work of auditors.

Their probe was launched in the wake of a social media campaign that began in 2018, amid massive anti-corruption protests over the lack of visible impact of funds from the PetroCaribe program, which in turn paralyzed America’s poorest country on repeated occasions and gave rise to calls for Moise’s resignation.

Now that the auditors have published their report, protesters, who have come to be called “Petro-challengers”, are focusing on the prosecution of those responsible with the slogan “Arrest the thieves”.