A British non-profit filed a lawsuit against the UK government for awarding a 108 million pounds (US$136 million) contract for purchasing COVID-19 protective equipment to a small pest-control company from Sussex that has 16 employees - a move they see as dubious. 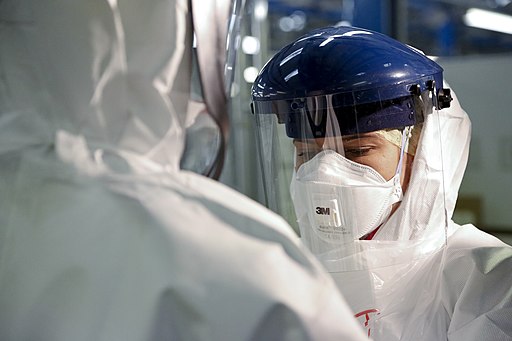 NHS staff wearing protective equipment during the ebola epidemic. (Photo: Simon Davis/DFID, CC BY 2.0)Good Law Project is contesting the need for the National Health Service (NHS) to award such a huge contract to Crisp Websites Limited, trading as Pestfix, without a call for tender.

The contract accounts for almost a third of all contracts for protective equipment for healthcare workers awarded by the British government since the pandemic started, according to the non-profit.

The deal was “unlawful” and “disproportionate,” said the complaint.

Good Law Project sees using the law to challenge abuses of power and inequalities as their mission.

“No way is this a proper use of public funds,” the organisation stated.

“What steps did the Government take to meet its obligation to achieve value for money and use good commercial judgement?” they asked.

Pestfix told OCCRP it submitted an application to the special evaluation team for COVID-19 equipment in late March 2020. The contract was subsequently awarded to them in April, without the NHS issuing any tender.

The company said that although the contract duration was 12 months, it was for a defined amount of products which they refused to disclose.

The Department of Health and Social Care precised in the award notice that it didn’t issue a call for competition because of the “extreme urgency” and that gloves, gowns and masks were "urgently needed".

“PestFix is a company that has never previously been involved in sourcing or supplying protective equipment for NHS frontline staff, whether in relation to COVID-19 or at all,” noticed Good Law Project.

“It has no sufficient experience or expertise,” the non-profit argued.

Pestfix’s main activity is pest control services, but their website also advertises the sale of some protective equipment (PPE).

The company said they have procured and distributed protective equipment from Chinese suppliers for the past 15 years and that their small team was nonetheless spanning three continents.

They described themselves as a “family-run business that has the unique ability to secure production at specialised medical PPE manufacturing plants” and “provide these vital items at a time when the entire world was chasing diminishing supplies.”

A Pestfix spokesperson said that the company was “proud” of the work they had done.

"Our team has worked non-stop for the past 78 days to support efforts of getting PPE to the frontline involving an ongoing and herculean logistics operation,” he said.

The company told OCCRP it had already delivered millions of items to the NHS and was “on track” to deliver tens of millions more.

Good Law Project will try to prove that the NHS should have issued a tender for the contract and hopes to redefine the requirements for emergency awarding. If the court rules in their favor, the Pestfix contract could be suspended before it’s expiry date in March 2021.