The fact that the pangolin is the world’s most trafficked mammal may have played a role in the emergence of the novel coronavirus, according to a report from the UN’s Office on Drugs and Crime. 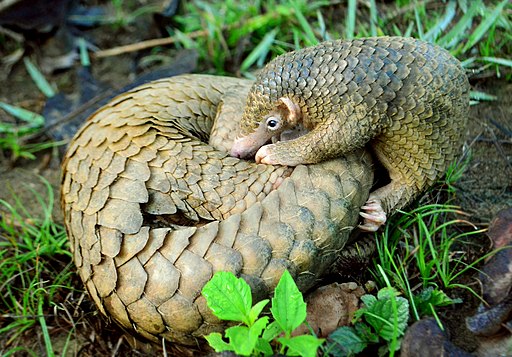 A Philippine Pangolin cub with his mother. (Photo: Shukran888, CC BY-SA 4.0)The scaly creature lives in Asia and in Africa, where it is traditionally hunted for its meat and the alleged medicinal properties of its scales, considered by some a potent cure for a range of conditions, including poor blood circulation, decreased lactation in mothers, and even infertility.

The pangolin shot to fame after early research suggested it may have served as intermediate host in the transmission of the novel coronavirus from bats to humans.

Experts say that if pangolins weren’t so heavily targeted by poachers, there would be limited interaction between human beings and the nocturnal, reclusive animal.

Last week, the agency issued an early release of a chapter about pangolin trade from their forthcoming World Wildlife Crime Report, due to be published in June 2020.

According to the UNODC, the bodies or scales of 370,000 pangolins were seized between 2014 and 2018, “suggesting that millions have been trafficked and killed.”

“We do not know how many African pangolins are left in the wild,” the report said, adding that there are increasing fears the species will soon be critically endangered, despite the introduction in 2016 of increased restrictions on international trade.

The UNODC report explains that Asia’s scale market has been increasingly reliant on poachers in Africa for the past six years, with China and Vietnam being the largest consumers.

“In Vietnam, the meat of local pangolins is considered a luxurious delicacy, which cost around US$350 per kilo or $1,000 for a whole pangolin, making it very appealing for restaurant owners despite its illegality,” Alegria Olmedo, a zoology researcher at Oxford University, told OCCRP.

Teodore Legget, one of the authors of the report, further clarified in a statement emailed to OCCRP that poachers of other animals are beginning to get in on the action.

According to the UN’s report, pangolin poaching is generally regarded as lower risk than hunting elephants or rhinoceroses, as well as being taken less seriously by the authorities, and so ivory traders are beginning to flock to the trade.

“Pangolins are also easier to catch than elephants or rhinos, as they require no helicopter or heavy equipment,” Olmedo said.

In July 2019, authorities in Singapore had seized a record shipment of pangolin scales and ivory, providing evidence of how ivory poachers are indeed beginning to diversify their trade.

Nigeria has grown into the main transit hub for Africa. “Like most Nigerian organized crime, there are operators functioning at all levels, and a wide range of trafficking techniques are involved,” Legget said.

The pangolin case has recently proven that poaching is much more than the threat of extinction of some animals.

“It has become all too clear that wildlife crime is a threat not only to the environment and biodiversity, but to human health, economic development and security,” concluded Ghada Waly, Director of the UNODC.