With a cacophony of banging pots and pans, Spaniards tried to sound out King Felipe’s speech, who took to the airwaves to discuss the severity of the coronavirus. 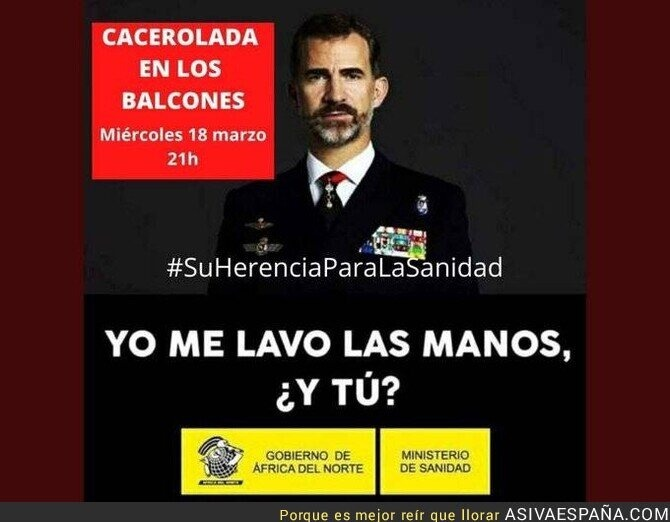 An image circulating on social media with King Felipe VI, reading "I wash my hands, do you?" Credit: FacebookThe public protest on Wednesday night was a response to the US$100 million in bribes that Felipe’s father reportedly received from the former King of Saudi Arabia.

The royal house attempted to subdue public outrage from the scandal, releasing a statement earlier this week that Felipe intends to renounce his father’s inheritance, but that did not stop a significant portion of the Spanish population from demonstrating their outrage while confined to their households due to Spain’s lockdown that was declared in response to the pandemic caused by the coronavirus.

An image circulated on social media announcing the planned “cacerolada”, a word coming from the “cacerola”, which means “stew pot” in Spanish, where people beat pots or pans with other cooking utensils as a form of nonviolent resistance, and in this case, when people were restricted from leaving their homes.

The image read, “I wash my hands, do you?” which serves as wordplay on both the sanitary measures recommended to stop the spread of coronavirus, and the fact that the King is attempting to wash himself of all blame associated with the scandal.

Mas Pais, a leftist movement in Spain tweeted that the money uncovered in the scandal should be donated to Spain’s public health system, which has become overburdened by the numerous hospitalizations of people suffering from COVID-19.

Reuters reported that even in more conservative neighborhoods of Madrid, where the monarchy has traditionally been supported, the sound of banging pots and pans during the speech was “deafening, nearly silencing Felipe’s uplifting words urging Spaniards to beat the epidemic together.”

Martí Clapés, 24, a Sociology doctoral student in Barcelona who participated in the cacerolada, told OCCRP that “there is no longer popular support for the monarchy as an institution in Spain.”

He explained that the monarchy used to be seen by the previous generation as a means by which Spain could transition away from dictatorship, but that this reasoning has vanished as more and more corruption scandals have been exposed.

“Really, it doesn’t do anything other than steal,” he said of the royal family.