The new Malaysian Government, led by a graft-dogged party, appointed on Monday a new head of the anti-corruption commission after its former boss resigned. 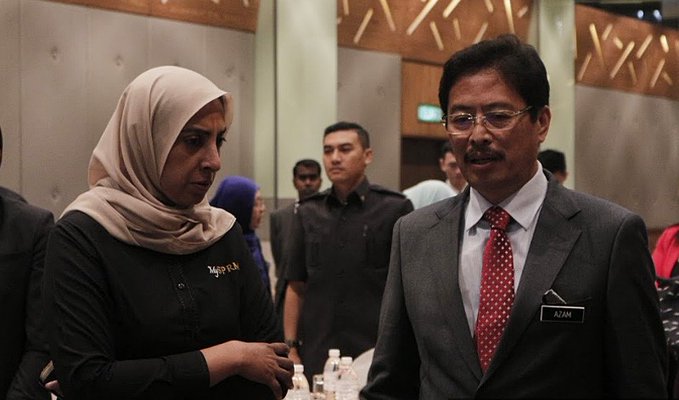 Former Malaysian anti-graft boss Latheefa Koya (L) and her successor Azam Baki (R). (Photo: twitter)Latheefa Koya, resigned on Friday and was replaced by her deputy, Azam Baki, the Government said in a statement.

Koya, Malaysia’s graft-buster who investigated the theft of billions of dollars from the country’s investment fund 1MDB, submitted her resignation to the country’s Prime Minister Muhyiddin Yassin.

“It was my own decision to do so. Speculation that pressure was brought upon me are baseless,” the former head of the Malaysian Anti-Corruption Commission (MACC) said in a statement.

“I also briefed the prime minister about our ongoing actions and efforts for the recovery of the stolen 1MDB monies from abroad and he was fully supportive of these actions,” she stated.

Koya’s resignation came after the United Malays National Organisation (UMNO) that ran the country for 61 years came back into power in February after it sat in opposition since 2018.

Back in June 2018 the MACC froze bank accounts associated with UMNO in relation with the 1MDB investigation. A few days later, Najib Razak, the former Malaysian prime minister and head of UMNO, was charged with embezzling billions of dollars from the state fund.

Earlier this year, Koya released recordings of phone calls which further implicated Najib in the 1MDB scandal. In one of the nine recordings, a female voice which the Commission identified as Najib’s wife, Rosmah Mansor, is giving him advice on how to handle allegations against him.

The recordings, according to Koya, had been submitted anonymously to the Commission and have provided further proof of a “high-level criminal conspiracy” that the ousted Malaysian PM relied on to absolve himself of corruption charges.

Koya is the third official to resign since the UNMO’s comeback.

Malaysia’s former Prime Minister Mahathir Mohamad also resigned last month, accusing the UMNO of orchestrating a return to power so that its officials escape conviction in the 1MDB case, according to Reuters.

The country’s Attorney General Tommy Thomas, who had brought the corruption charges against Najib and other members of the former UMNO administration, quit last week, according to the report.

Najib, who denies the charges against him, said that with the new government, he expected an atmosphere more conducive to a fair hearing.

The 1MBD scandal erupted after US$4 billion disappeared from state funds in 2015 with almost $700 million allegedly transferred into Najib’s bank account.