Opposition leader Alexei Navalny said on Tuesday that Russian authorities have blocked all of his bank accounts as well as those belonging to his family, including the one his 11-year-old son used to save money to buy a laptop and the ones his retired parents received their pensions on. 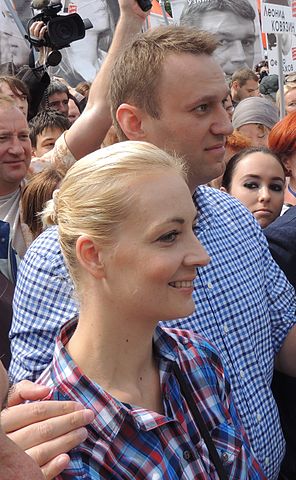 Kremlin critic Alexei Navalny and his wife Yulia. (Photo: Bogomolov.PL (CC BY-SA 3.0))“I was sitting in my office, looking at some materials for the next investigation when I received a text message from my wife saying that all her accounts and credit cards have been blocked,” Navalny described in a video. “Few minutes later, the same message came from my parents,” he said.

He said that the biggest shock came when his son called him to say that the bank texted him that his account - a special children account at which Navalny had over time put 30.000 rubles (US$453) for a new laptop - has been frozen.

His parents, as he said, were just about to receive their monthly pensions when their accounts were blocked.

“Navalny kept most of his funds in his bank account, so now he isn’t sure how he is going to pay his rent or even buy groceries,” the Anti-Corruption Foundation (FBK) which is headed by the Kremlin critic said in statement.

Russian authorities have also frozen the bank accounts of FBK director Ivan Zhdanov, his wife and elderly parents, according to the FBK.

Besides that, both Navalny and Zhdanov stated that they checked their accounts online and found that 75.5 million rubles ($1.13 million) were withdrawn - the exact amount that was donated to the foundation and that the Russian Investigative Committee considers “money obtained by criminal means.”

Russian authorities launched an investigation into the foundation’s finances in August last year, suspecting that it laundered one billion rubles ($15.3 million).

Two months later, Russia’s Ministry of Justice declared FBK - a “foreign agent,” which forced the anti-graft group to disclose its donors and objectives. At the same time, authorities raided FBK offices and homes of its officials nationwide.

“During the past months, hundreds of bank accounts of people who were at some point related to the foundation or have donated money to it were blocked as part of the ‘FBK case’ and in an alleged attempt to recover the ‘stolen’ millions,” read the FBK statement.

The foundation also said that the latest move of the Russian authorities against the leading Kremlin critic coincides with the third anniversary of the publication of an investigation into the shady businesses of the former Russian Prime Minister, Dmitry Medvedev, titled “Don’t call him Dimon.”

The report provoked a public uproar over the misuse of state funds and unleashed massive protests in Russia in 2017.

At the same time when his bank accounts were frozen, Navalny was notified that Russian oligarch Oleg Deripaska has filed a defamation lawsuit against him.

He said that his client requests the court to force Navalny to refute his claim and pay “a symbolic compensation for moral damage in the amount of 1 ruble.”

Despite the problems, FBK said it will continue its work and soon publish the result of a large investigation.