A Moscow court ordered on Thursday two catering companies to compensate the families of schoolchildren who suffered food poisoning with the equivalent of US$4,700, days after it ordered an NGO to pay nearly 300 times that much to one of the companies for reporting about the incident. 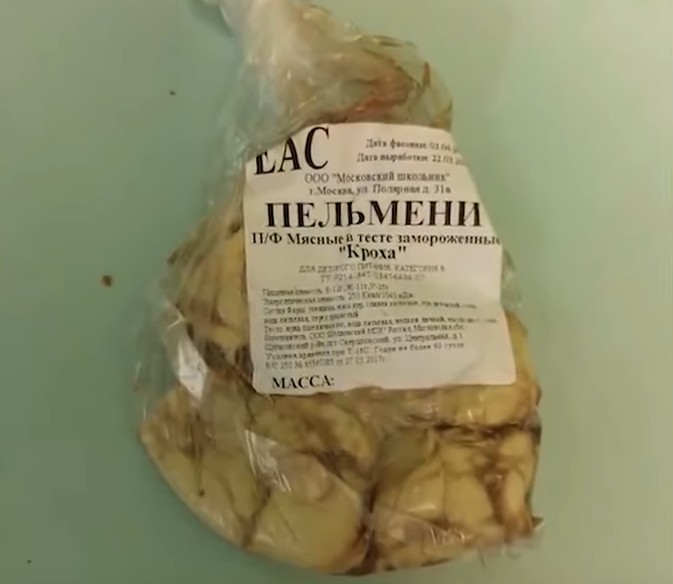 Meat dumplings of questionable quality in a Moscow school (Photo: FBK Report)Parents of children who suffered from dysentery after consuming food provided by Vito-1 and Concord in December last year, sued both the two catering companies as well as the city’s administration, according to Interfax.

The court struck down the charges against the city but ordered the two companies - one owned by magnate Yevgeny Prigozhin - to compensate the parents with between 10,000 to 15,000 rubles ($158 to $237) per child.

Prigozhin is also known as “Putin’s chef” because he has often been in charge of organizing Vladimir Putin’s dinners with foreign dignitaries.

The ruling came two days after the same court ordered the Anti-Corruption Foundation (FBK) of Kremlin critic Alexei Navalny to pay 88 million Russian rubles (US$1.4 million) to Prigozhin, for blaming his company for the food poisoning.

Commenting on the court’s decision, FBK’s lawyer and activist Lyubov Sobol said parents should appeal because “the compensation is too meager.”

Navalny commented the case with a question: “Does Prigozhin continue to poison children?” - the title of the latest FBK’s video report, showing the situation in one of the Moscow schools hit by the outbreak.

According to the report, some of the suspicious food, such as expired pelmeni (meat dumplings), rotten meat or compote made from apples that have already gone bad, is still being served to children.

He has won school food-supply contracts in Moscow since 2009 that are worth $2 billion, according to the Associated Press.

Prigozhin, as OCCRP reported, is also known as the one who ran the infamous St. Petersburg “troll farm” and other pro-Putin media operations. One of his operatives came clean to reporters, sharing some of the alleged dirty work he and his team did for the oligarch — including murder.