Bulgarians were gathered on the streets of Sofia to protest a vote by the country’s Supreme Judicial Council on Thursday long before its outcome was officially announced: that Ivan Geshev had been elected, 20-4, to be the country’s new prosecutor general. 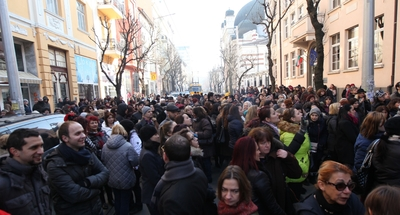 Bulgarians gather in Sofia to protest Ivan Geshev’s candidacy (Source: Boec-bg.com)After all, the controversial former deputy prosecutor, known for his pro-government stance and his anti-opposition rhetoric, was the only candidate for the position.

Though Geshev’s formal election by Bulgaria’s highest court was expected, over 1,000 citizens participated in renewed demonstrations against the nature of his candidacy and the way it reflects—and stands to maintain—the political “capture” of the prosecutor’s office and high-level corruption in the government.

Demonstrators used tents and vehicles to create a blockade on Eagle Bridge, a longtime site of political protest in the country, and carried white banners bearing anti-mafia slogans.

The protest was only the latest, and possibly the largest, in a string of demonstrations that have taken place in Bulgaria since it became clear that Geshev was the only candidate being considered for the powerful position in July.

In July, hundreds marched through Sofia’s Independence Square in a demonstration organized by Bulgarian NGO Justice for All, bearing bright yellow anti-Geshev signs and banners.

In early October, citizens took to the streets at night and stood side by side outside of the Palace of Justice holding up lamps and cell-phone flashlights in a demonstration titled “Lighting the Light in the Dark: for Law and Freedom.”

Some of the resistance to Geshev’s candidacy comes from his controversial political statements and “dirty” rhetorical style that is far from “impartial” and echoes the country’s tabloids—also known as the “brown-yellow press.” In the past, he has vocally attacked ethnic minorities, the media, activists, and other political parties.

Of greater concern to many, however, are his ties to the Bulgarian political establishment, which is already seen as deeply corrupted by much of the population.

As a candidate, Geshev has received unprecedented unanimous support from the country’s prosecutors. According to Dimitar Markov, an expert at Sofia’s Center for the Study of Democracy, this, combined with a “very strange silence on the part of all the major political parties” and many of the opposition parties, suggested that his candidacy was “a political decision that [had been] taken long ago.”

“The fact that people are so interested in the nomination and election of prosecutor general means that they see it as a political thing, not as a real judicial thing,” Markov told OCCRP.

Bulgaria was ranked as the most corrupt country in the European Union in Transparency International’s 2018 corruption perceptions index, and Bulgarians surveyed identified political corruption and judicial corruption as two of the greatest problems facing society.

The Prosecutor’s Office in particular suffers from extremely low levels of trust, according to Markov.

“Which is not very natural for a democratic country where we expect that we have the rule of law—and where the public prosecutors office is the guardian of the rule of law,” he points out.

The tenure of the country’s former Prosecutor General Sotir Tsatsarov, moreover, appeared to reflect how the prosecutorial arm of the judicial branch had been “captured” by the interests of the ruling GERB party, so as to undermine any prospect of its role in fighting government corruption.

Described as a “bat” for Bulgarian politicians and oligarchs, Tsatsarov oversaw controversial investigations into many of those trying to speak out against corruption, including members of the political opposition and the independent media. Recorded conversations leaked in 2015 suggested that he had strong ties to ruling politicians, including the prime minister, and many called for his resignation over the course of his seven years in office.

“Tsatsarov failed in the war against crime in his last seven years [as prosecutor general], but fully succeeded in keeping the mafia and corruption in the Bulgarian government,” Nikolay Hadjigenov, a Bulgarian civil rights lawyer told OCCRP.

Many view Geshev, who has frequently appeared by Tsatsarov’s side over the course of the last several months, as a continuation of this politicized prosecution, and among the many slogans being chanted at recent protests has been: “Stop Geshev – the new bat!"

Also central to the issue of Geshev’s election is the “absolute power and control” of the prosecutor general role in Bulgaria; as Nikola Filchev, a former occupant of the position, once famously put it: “above [him] is only God.”

Geshev himself was very recently the subject of an investigation by Bulgarian journalism outlet Bivol, which obtained audio recordings from a criminal case overseen by Geshev that appeared to show him overstepping many judicial boundaries when negotiating a plea bargain with two organized crime groups.

Both the European Union and the European Court for Human Rights have publicly criticized the immunity of the country’s prosecutor general in the past, but Bulgaria has yet to make any changes to the structure of the system.

However, that both the EU and the US appear to have turned a blind eye to the controversy of Geshev's nomination and the general erosion of the rule of law in Bulgaria has also “fueled” the political forces that backed Geshev’s election, according to Atanas Tchobanov, a journalist at Bivol.

Earlier this year, Geshev partook in an official visit to the US, and just a few days before Thursday’s election, the EU ended its corruption monitoring program in the country; two events which were construed by the pro-government media as a mark of success for the reigning political establishment.

Geshev still needs to be confirmed by Bulgaria’s President Rumen Radev before officially taking on the role. Even if Radev declines to appoint Geshev, however, he is ultimately limited in his ability to put a full stop to the appointment: the president is only allowed to veto one candidate put forward by the Supreme Judicial Council, which has indicated that it will re-elect Geshev if this happens.

If Geshev is ultimately given the position, Tchobanov anticipates a crack-down on members of civil society and the independent media. Just days before Thursday’s vote, Reporters Without Borders pointed out that Geschev has made “extremely scathing comments about media outlets that are not to his liking, raising fears about possible reprisals.”

“Without regard to procedure, without evidence and in violation of his duty to be impartial and principled, Geshev has expressed himself in terms that suggest that Bulgarian democracy is in great danger,” the watchdog continued.

Markov says that it’s difficult to know what Geshev’s plans for the office are, because his candidacy has been so overwhelmed by the protests against the nature of his nomination. He notes, however, that the strong support he is receiving from the country’s political establishment does not bode well for the fight against political corruption.

“The main concern is that if there is serious political support [for Geshev], then you wouldn't expect very proactive behavior against major political actors in the next seven years.”