In the latest of a series of legal proceedings against former Ecuadorian government officials, the ex-Minister of Transportation and Public Works returned to court Monday to broaden her statement on bribery allegations against her and several other administrators, the Quito newspaper El Comercio reported Monday. 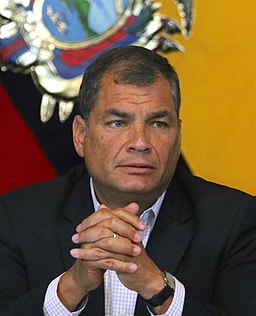 Prosecutors believe that more than 20 individuals are implicated in the corruption scheme, in which “businessmen or intermediaries allegedly delivered money - either in cash or through the crossing of invoices - to public officials in exchange for contracts with the State or other benefits,” the press release said.

The list of suspects includes ex-President Correa, Vice President Jorge Glas, and a number of former ministers and advisors, some of whom are described as “fugitives from justice.”

Judge Daniella Camacho issued an order of preventive detention against suspects in the country and asked Interpol for their assistance in locating and arresting the former president and ministers, according to El Comercio.

However, Interpol has denied these requests in the past.

Glas is still serving a six-year prison sentence for receiving bribes from Odebrecht, a Brazilian construction company, according to a Thursday article from El Universo.

In a Monday interview with journalist Orlando Pérez of the television network Telesur, Correa stated, “the idea is to take me to court for bribery, invent evidence where there is none, condemn me and prevent me from returning to my country. Keep dreaming, the people of Ecuador will teach you a lesson.”