Italy: Questions and a Bullet for Salvini

Just a coffee, or a deal that will support Italy’s far-right Lega party and allow Putin to further destabilize the EU? Italian deputy Prime Minister Matteo Salvini may have to answer this question soon. 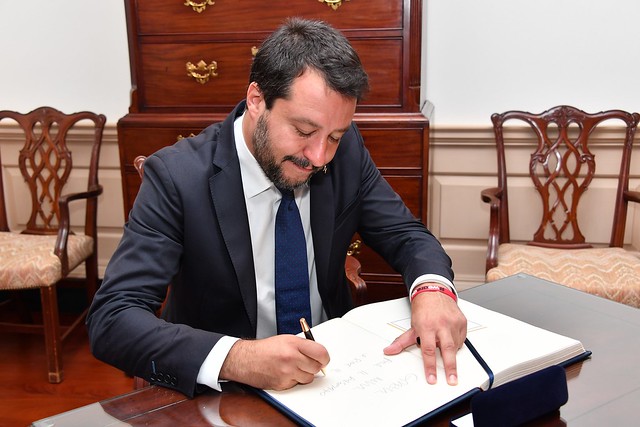 Matteo Salvini, Italy's Deputy PM and leader of the far-right Lega party (Photo: US Government)Salvini’s close aide Gianluca Savoini, as BuzzFeed News reported on Wednesday, was “caught on tape at the Metropol Hotel in Moscow last October discussing the terms of a possible oil deal with five other men - three Russians and two Italians - that would have seen Lega covertly receive around US$65 million over the course of a year”.

Although the Italian journalists revealed the affair in February this year, alleging that the group negotiated a complicated plan to secretly finance Salvini’s party with Russian money ahead of the European elections in May this year, Salvini has repeatedly denied the allegations.

However, when BuzzFeed revealed it has the tape proving the occurrence of talks to pump Russian oil money to Salvini’s far-right party, Italian News Agency ANSA reported that Milan prosecutors on Thursday opened a probe to see whether the Lega party received funds from Russia.

Prosecutors Fabio De Pasquale, Gaetano Ruta and Sergio Spadaro, according to judicial sources, have announced possible charges of international corruption in the case.

Two former Prime Ministers of Italy - Matteo Renzi and Paolo Gentiloni - also said Salvini will have to answer some questions as soon as possible.

Renzi commented on his twitter that it would be crazy to use Russian oil to finance the Lega party and stressed that “Salvini must clarify that immediately.”

Italian opposition center-left Democratic Party has also demanded that Salvini address the allegations before the Parliament, reminding him that Italian laws ban political parties from taking donations from foreign entities.

Salvini reacted immediately and denied all media reports about the Moscow meeting, at which the six men reportedly discussed a possible deal involving a Russian company selling oil worth some US$1.5 billion, at a discount, to enable the League to pocket part of the difference - tens of millions of dollars.

“I have never taken a rouble, euro, a dollar or a litre of vodka in funding from Russia,” Salvini told Italian News Agency ANSA, stressing he would sue anyone who dares to accuse him of “such crimes.”

BuzzFeed claims it has the secret recording which provides “the first hard evidence of Russia’s clandestine attempts to fund Europe’s nationalist movements, and the apparent complicity of some senior figures from the far right in those attempts.”

The outlet said that Salvini’s aide Savoini can be heard on the tape describing himself as the “total connection” between the Russian and Italian sides and declaring the aim of the proposed deal was to “change Europe.”

A whole transcript of the recorded material, as BuzzFeed announced, will soon be published.

In the meantime, ANSA reported on Thursday that an anonymous sender from Sesto Fiorentino near Florence sent to Matteo Salvini a letter containing a “22 calibre bullet wrapped in tin foil”. The letter, according to report, was addressed to “Minister Duce (leader), Matteo Salvini, Lower House, Rome.”

Police in Rome reportedly opened an investigation into the case, while Salvini said he was not scared, blaming leftwing circles for the threat.

“On the contrary, they give me yet more strength and desire to fight criminals of all kinds,” ANSA quoted Salvini, who could easily find himself facing a crime investigation soon.